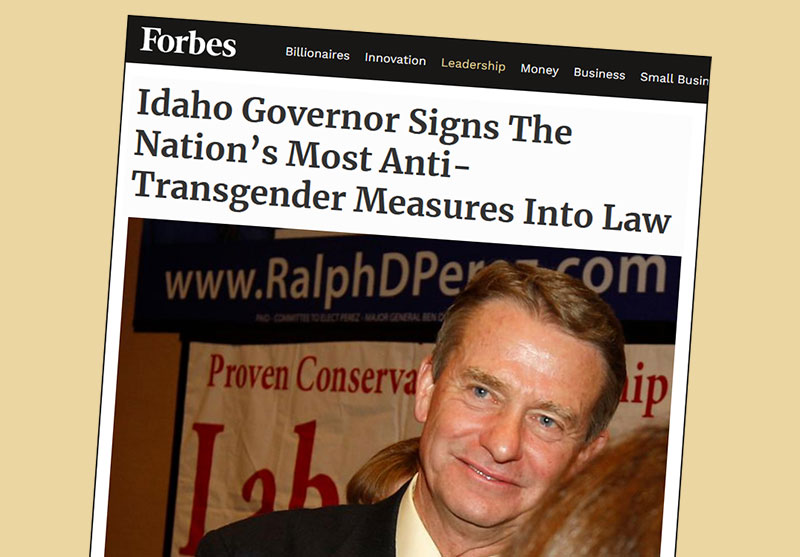 The national mainstream media fumed over Idaho's common-sense moves to protect their citizens!

This week Idaho became the first state in the country to enact specific laws to protect the public from the aggressive “transgender” agenda. On Monday, March 30, Gov. Brad Little signed the two prominent bills that had been passed overwhelmingly by the GOP-dominated Legislature.

But it was a big fight. As we reported last week, there was a massive nationwide campaign to persuade the Governor to veto them. MassResistance worked hard to counter the negative campaign by mobilizing people in Idaho and across the country to exhort the Governor to sign the bills, using forceful arguments.

Here are the two bills that are now enacted into law:
HB 500 says that only females (not males pretending to be females) may compete in girls’ or women’s school and college sports.
HB 509 requires that public documents – such as birth certificates and drivers’ licenses – use a person’s biological sex, rather than the person’s contrived “gender identity.”
These would appear to be simply common sense – but they infuriated the national LGBT movement. 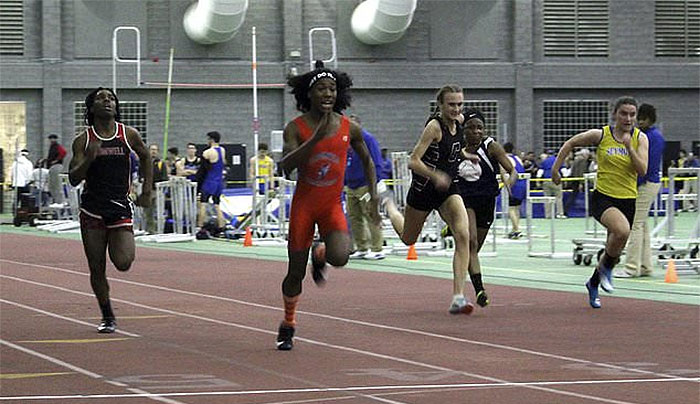 Two boys pretending to be a girls (at left) easily finish first and second in the Connecticut girls state championship for the 55-meter dash in 2019. [AP Photo]

Similar bills confronting transgender madness (including bills to make illegal any transgender medical procedures on children) have been filed in over 40 states across the country, but none have passed. Much of that is due (in our opinion) to weak pro-family leadership and ineffective strategies in the face of fierce national corporate and LGBT pressure. Besides underestimating the power of our adversaries, pro-family people are usually unwilling to sufficiently confront the bizarre and outlandish positions taken by the Left and their allies in the mainstream media.

While the bills were making their way through the Idaho Legislature, over three dozen national corporations attempted to intimidate the legislators with “threats” against the state if these bills passed. After the bills got to the Governor’s desk, the campaign intensified. 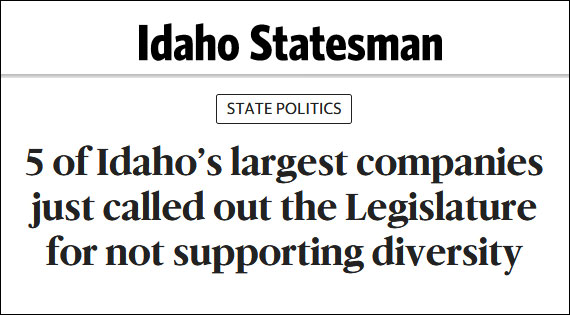 On March 5, the Idaho Statesman newspaper reported that in addition to the other corporations, 5 companies, including Hewlett Packard, Chobani Yogurt, and Micron, hand-delivered letters to the State Senate committee in support of the radical transgender agenda.

Fears that the RINO Governor would veto the bills

In Idaho, the Governor must veto a bill passed by the Legislature to stop it. If he signs it or ignores it, the bill becomes law.

Even though the two bills easily passed in Idaho’s conservative Legislature, many pro-family activists feared the worst when they got to the Governor’s desk. Republican Gov. Brad Little had a less-than-stellar pro-family record during his years in Idaho politics. As one activist told us:

I know Gov. Little personally. He is pro-abortion. Fourteen years ago he was the deciding vote in the state Senate blocking putting Idaho's Marriage Protection Amendment on the ballot until he was hammered by radio ads calling him out. He was the most "moderate" of the three GOP primary candidates for Governor in 2018 and won only because two more conservative candidates split the conservative vote.

During a Feb. 19 press conference, the Governor was asked about the bills. He answered “I don’t think we ought to be sending signals that we’re intolerant in Idaho,” Little said. “That’s my personal position.”

The national LGBT organization “Human Rights Campaign” (HRC), which also funds homosexual and transgender programs in the nation’s elementary schools, appears to have been the ringleader of the campaign, with the LGBT group GLSEN also running a national grassroots effort. (HRC has also teamed with the National Education Association, ACLU, and Gender Spectrum to promote transgender programs for students in grades K-12.)

The mainstream media, such as CNN, CBS News, and the Idaho Statesman newspaper, basically parroted the LGBT propaganda.

Here is a sample of their absurd talking points:

In addition to that, the LGBT movement gathered a long list of corporations, prominent politicians, education associations, medical associations, and child welfare organizations to oppose these “anti-transgender” bills in Idaho. That is probably the most frightening aspect of all this. The fact that organizations such as the American Association of Child and Adolescent Psychiatry would sign on to this quackery tells us that a large swath of the medical profession has completely lost any credibility. This list is so important for people to know about that we will be presenting it separately in our next article.

That tactic of bringing together major corporations and other prominent organizations to pressure the politicians has been extremely successful across the country. Luckily, we didn’t let the Idaho Legislature and Governor succumb to it. 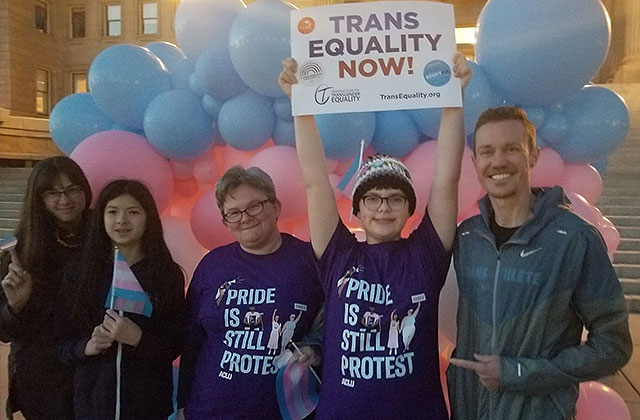 A "trans Olympic athlete" (right) poses with young kids at a 200-person rally against bill H500 in front of the Idaho State Capitol - funded and organized by the national LGBT movement. [Photo: South Florida Gay News]

The forces that kept the Governor from caving in

There are five basic factors that kept the Governor from caving in to the massive LGBT campaign:

We can’t remember the last time the national media reacted so angrily to some fairly minor legislation in the Idaho Legislature. It’s a testament to the power that the LGBT movement has over them. It also shows the extent of their incredible bias – truly “fake news.”

New York Times: ‘Boys Are Boys and Girls Are Girls’: Idaho Is First State to Bar Some Transgenders

For the past 20 years, many pro-family activists and groups have contented themselves with putting up some kind of a fight and losing gracefully. They witnessed the power of the national LGBT movement and corporate interests to bully legislators, Governors, and states to push through ever more outrageous and radical laws, and to force them to back away from enacting laws and policies to protect citizens from this madness.

We obviously can’t change what other pro-family groups do. But MassResistance can and will continue to do what’s right and effective. In this terrible battle, we don’t accept defeat, and we don’t beg and plead with lawmakers and elected officials to do the right thing. And above all, we tell the truth.

Will our pattern for victory be replicated in other states? Only time will tell.