They insist that males should compete on female sports teams. Very revealing about their frightening mindset. 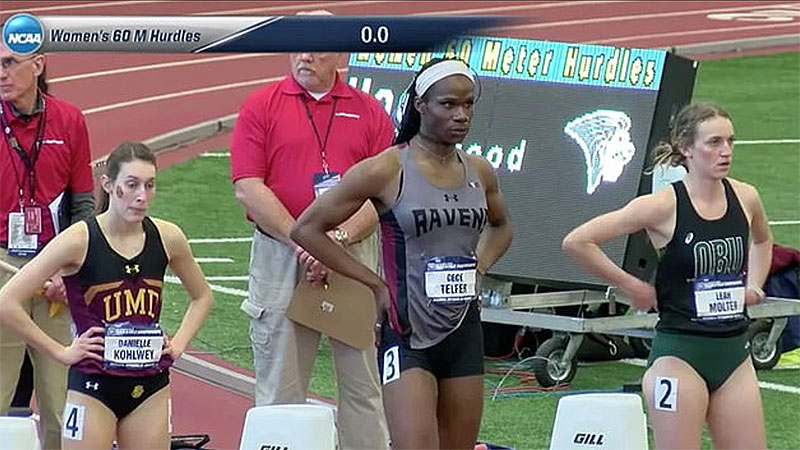 Craig Tefler (center), a male who now "identifies" as a female, won the U.S. national title for the women’s 400 meter hurdles at the NCAA Division II Championships on May 25, 2019. During 2016 and 2017 he had competed on the men’s team for the same event and was not among the top 200 competitors. Radical “education” groups insist that this must be allowed. [Photo: UNILAD/UK]

What’s really going on in the heads of the people running the “education” groups that actively oppose sensible laws protecting people from radical transgender lunacy? MassResistance recently got a taste of it, and it’s not at all pleasant.

In our recent post we listed the major education, medical, and social welfare organizations that had lobbied the Idaho Legislature not to pass two bills protecting the public from the radical transgender agenda. (Luckily, the bills passed anyway.)

We noticed that one of the groups on the list is the “Association of Title IX Administrators.”  This group was particularly opposed to the Idaho bill which says that only females (not males pretending to be females) may compete in girls’ or women’s school and college sports.

We looked a little further into the Association of Title IX Administrators.

Title IX (“Title Nine”) refers to the federal law passed by Congress in 1972 that prohibits any school that gets federal money (basically, all of them) from discriminating on the basis of “sex” in any “education program or activity” – which includes athletics. Furthermore, every school district, college, and university in the US is required to have a Title IX administrator (to ensure compliance with the law).

In 2011 a group of liberals wanted to use the Title IX law to push a radical and aggressive sexual ideology in high schools and colleges. They formed the Association of Title IX Administrators (ATIXA), as a purported “professional association.” Led by radical attorneys, they have been extraordinarily successful in organizing thousands of Title IX administrators across America to push their agenda. Among other things, the group provides “compliance, litigation, and expert witness services” as well as extensive training sessions. 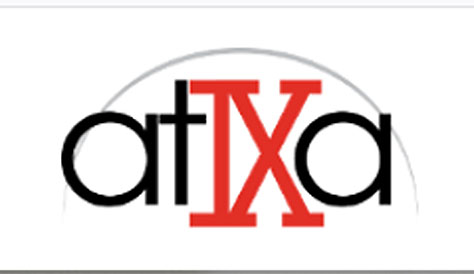 In 2016, the Obama administration decided that the word “sex” in Title IX must now include “gender identity” – i.e., transgenderism. Obama’s Justice Department and Department of Education published a letter to all schools demanding that all athletic teams, locker rooms, restrooms, etc., be open to opposite-sex “transgender” students – under a veiled threat of possible federal litigation. Simultaneously, the Department of Education published a ridiculous booklet for all schools titled, Examples of Policies and Emerging Practices for Supporting Transgender Students.

ATIXA used those government documents to aggressively confront schools and universities across the country to force them to allow males to compete on female sports teams, and vice versa. 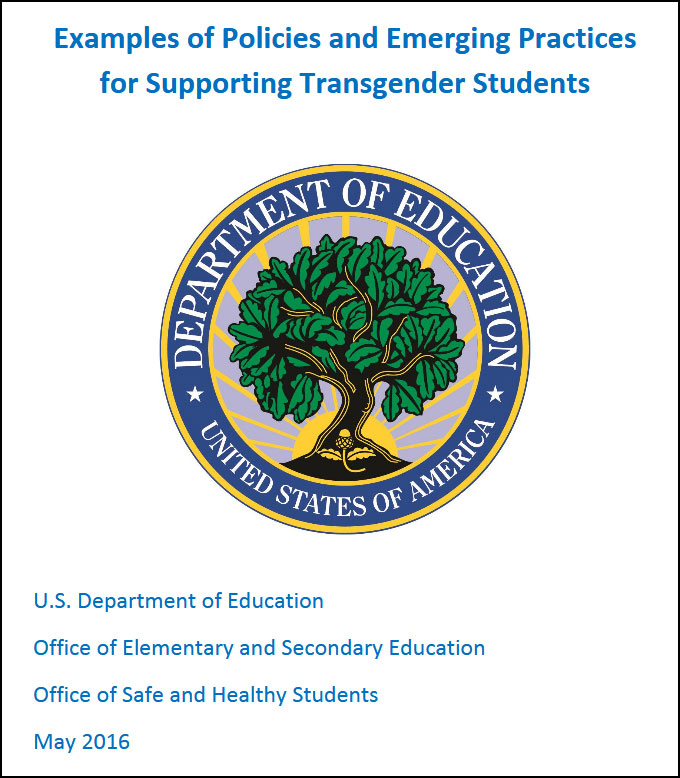 This absurd Obama-era booklet is unfortunately still posted on the DOE website.

Thankfully, in early 2017, the Trump Administration (Dept. of Justice and Dept. of Education) rescinded that nonsense, and published an updated letter to all schools informing them that a federal district court has ruled that “the term ‘sex’ unambiguously refers to biological sex” and issued an injunction against mandating the earlier interpretation.

However, ATIXA decided to ignore the Trump Administration’s 2017 letter and continues to pretend that the Obama mandate is still in place – that “sex” must include “gender identity.” The group explained its reasoning in a Feb. 2017 Position Statement, where they basically said that a current court case (that did not involve sports teams) might rule in their favor. They also cited material from radical LGBT groups such as the Transgender Law Center and Human Rights Campaign.

In March 2020, the Trump Department of Justice (DOJ) made its position clear again. Three Connecticut high school girls are suing Connecticut school officials in federal court for allowing boys to compete against them in track. The DOJ filed a strongly-worded amicus brief in their favor – and against the absurd concept that Title IX requires “transgender” participation in school sports.

MassResistance poses the question to ATIXA

On April 7, MassResistance Research Director Amy Contrada emailed a question to the Board Members of ATIXA. She simply asked if they planned to update their 2017 Policy Statement to include the DOJ’s amicus brief in the Connecticut Case.

Here’s what Amy wrote to ATIXA:

Is ATIXA planning an update on your 2017 policy statement regarding “gender” issues in K-12 schools? There has been an important new development I don’t see addressed on your website.

Earlier this month, the DOJ intervened in the lawsuit brought by high school girl athletes in Connecticut. The plaintiffs are challenging Connecticut Association of Schools, five local school boards, and the Connecticut Interscholastic Athletic Conference (CIAC) over their policies allowing biological boys (who claim to be transgender girls) to compete on girls’ teams.

The DOJ brief (siding with the plaintiffs) explains that the named Connecticut school entities are in error, and that the term “sex” in Title IX should “be interpreted as taking [its] ordinary, contemporary, common meaning.” Excerpts from the brief:

… requiring all students to participate on the athletic team associated with their biological sex cannot be described as sex “discrimination.” … Nothing in Title IX or Supreme Court precedent requires such radical upheaval. To the contrary, the Supreme Court has recognized that sex-based classifications sometimes are permissible because certain “differences between men and women” are “enduring.”

Title IX and its implementing regulations prohibit discrimination solely "on the basis of sex," not on the basis of transgender status, and therefore neither require nor authorize CIAC's transgender policy. To the contrary, CIAC's construction of Title IX as requiring the participation of students on athletic teams that reflect their gender identity would turn the statute on its head. One of Title IX's core purposes is to ensure that women have an "equal athletic opportunity" to participate in school athletic programs. 34 C.F.R. § 106.41(c); see also Cohen v. Brown Univ., 991 F.2d 888, 897 (1st Cir. 1993) ("Equal opportunity to participate lies at the core of Title IX's purpose.").

Schools realize that purpose primarily by establishing separate athletic teams for men and women and by ensuring that those teams are on equal footing. See 34 C.F.R. § 106.41(b)-(c). Because of the physiological differences between men and women, the existence of women's sports teams permits women to participate more fully in athletics than they otherwise could.

Their point on the meaning of "sex" in Title IX has relevance to other school policies relating to gender identity (facilities use, names, pronouns, official student records).

I look forward to your response.

A bizarre and vile response

Within hours, Amy received the following reply from Attorney Brett Sokolow, the president of ATIXA. The reply was also cc’d to the ATIXA Board of Directors. The reply did not directly answer Amy’s question about the new DOJ statement, but was an inexplicably hateful, anti-Christian rant.

I am responding on behalf of the entire ATIXA board, whom you copied. ATIXA will revise its position statements as necessary once the Supreme Court makes its rulings in October. Until then, any changes are premature. Please consider any further communication from you or your organizations to be unwelcome. I hope you will reconsider your bigotry, as I doubt Jesus would have tolerated the kinds of intolerance that you not only accept but embrace. We find your positions and advocacy repugnant. Thank you.

This is a clear window into the mindset of the people in these organizations. We’ve seen it in school officials, politicians, and corporate executives. It’s as if they’re incapable of discussing this issue in any rational way. 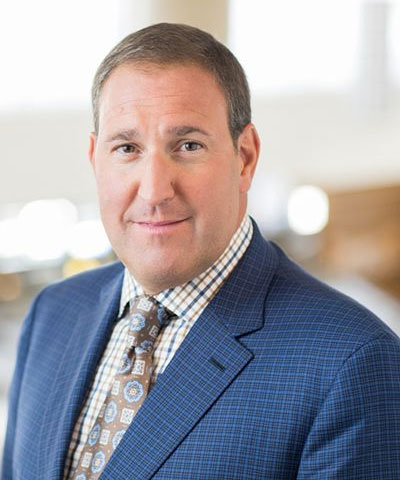 Attorney Brett Sokolow, president of ATIXA, responded to Amy "on behalf of the entire ATIXA board."

In many ways it’s similar to a cult belief. Transgenderism, like the rest of the radical LGBT ideology, is basically irrational and cannot be defended in a normal manner. Instead, anyone who disagrees is met with a torrent of hatred and fury. These are the people who are leading (and are a part of) many of the major education and medical institutions.

But we believe that it’s imperative that good people always challenge these people and their dangerous and absurd positions. And we will continue to do so.

Sokolow does not say what “Supreme Court rulings in October” he is referring to. But it would appear to be the case of a Detroit Funeral home being sued for firing a man who insisted on dressing in women’s clothes. It is actually a Title VII case (dealing with employment), not a Title IX case. But the LGBT lobby believes that if the Supreme Court rules their way in this case – that “gender identity” is included in the word “sex” in anti-discrimination law – it would carry over to Title IX.

We will stay on top of this issue.