A trail of depravity in a public elementary school.

School district does not consider this a problem!

Part of a pattern around the country? 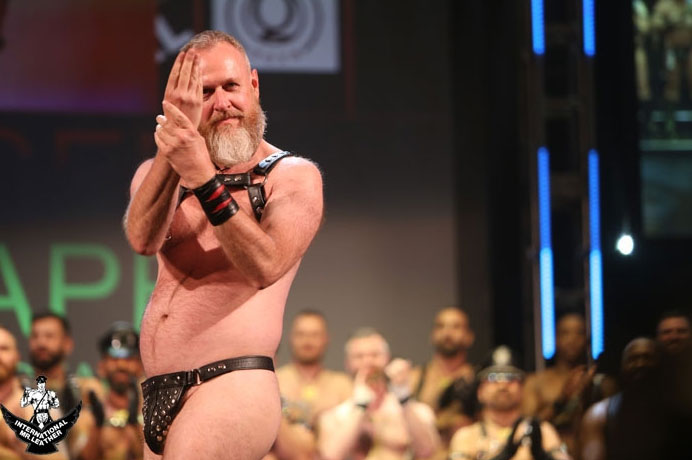 There was a time when schoolteachers – especially in elementary schools – had to have moral integrity as well as academic knowledge in order to teach children. People of a certain age remember that. But those days are gone. Unfortunately, most parents either don’t realize it or don’t care.

A “Drag Queen” at the elementary school

The Blackshear Elementary School is a “magnet” public school in in Austin, Texas, that describes itself as a  “fine arts academy.” 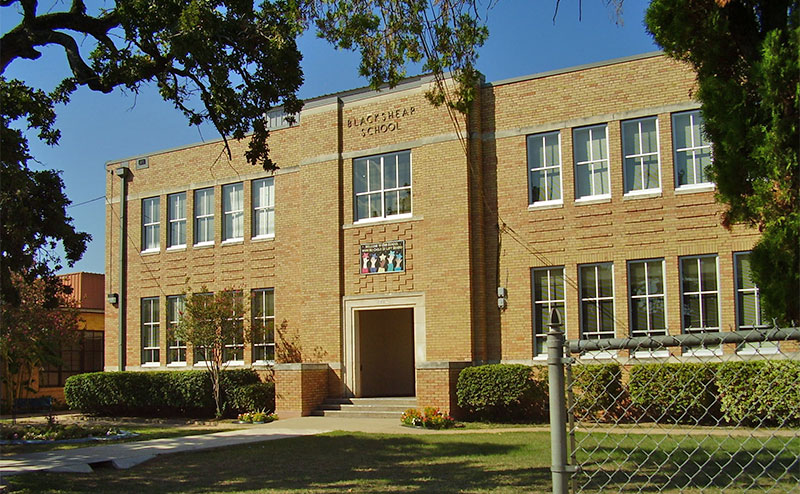 Last year, our Texas MassResistance Director, Tracy Shannon, received a disturbing tip from a local parent. The Blackshear Elementary School had invited an Austin-area Drag Queen, David Lee Richardson, aka “Miss Kitty Litter,” to read to the children in the school library.

How did a “Drag Queen” who is a convicted prostitute also get into the Blackshear Elementary School? What is going on? Was there a background check? 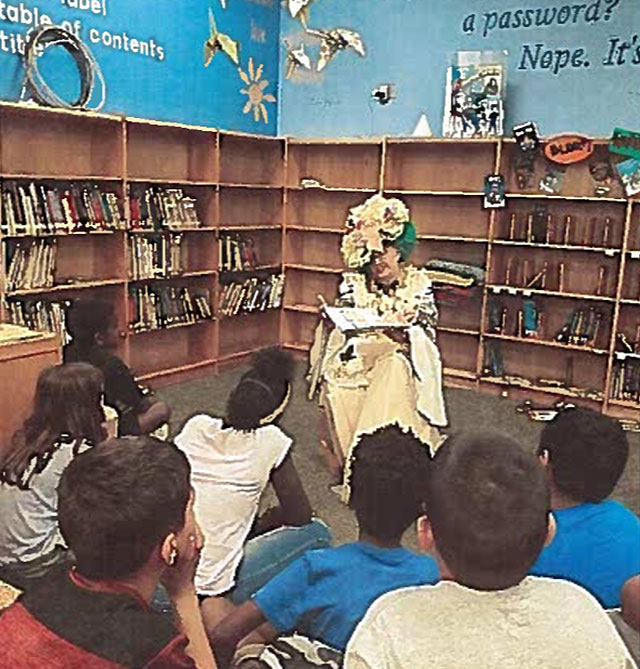 The Blackshear school provided this photo of "Miss Kitty Litter" reading to the children in the school library.

As Tracy continued to uncover more, Arthur Schaper of MassResistance filed a Freedom of Information Act (FOIA) request with the Austin Independent School District for all materials regarding that incident, including the people who invited “Miss Kitty Litter” to the school. What we found out was shocking!

Brought in by school librarian – who knew about the prostitution conviction!

The FOIA request yielded quite a bit of information. We discovered that Roger Grape, the school librarian for the past seven years (who calls himself the “Guybrarian”) was the person behind inviting Miss Kitty Litter to the library.

We also learned that Grape knew that Miss Kitty Litter had a criminal record – and he knew that MassResistance had exposed it. But he still wanted to take every step possible to get him into the children’s library anyway. (He also attempted to invite additional Drag Queen performers to read to the children, according to the FOIA material.)

First, Richardson acknowledges to Grape that he might not pass a background check at all because of his prior conviction: 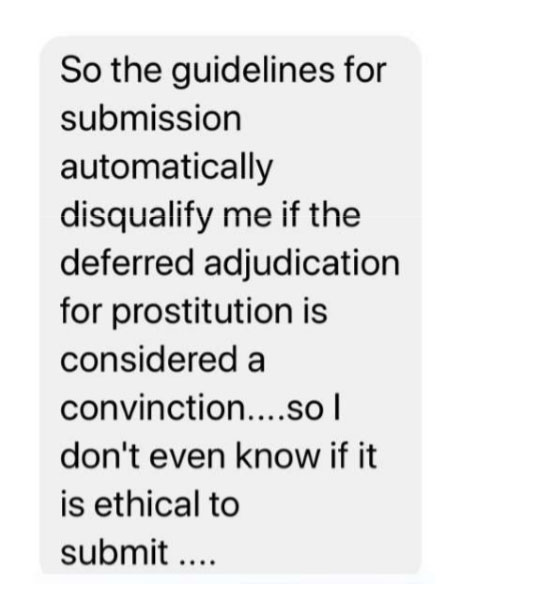 Rather than be concerned about the well-being of the children, Grape instead suggests that there might be a loophole for Richardson, which he is happy to do:

(Deferred Adjudication in Texas means that the defendant pleads guilty to the crime, but the judge "defers" a guilty verdict and instead gives him probation. It is technically not considered a conviction, even though the court agreed that the evidence was against him and he admitted that he did it.)

In their texting back and forth, Grape and Richardson poked fun at Tracy Shannon, too. They both obviously were aware that she had already exposed this. 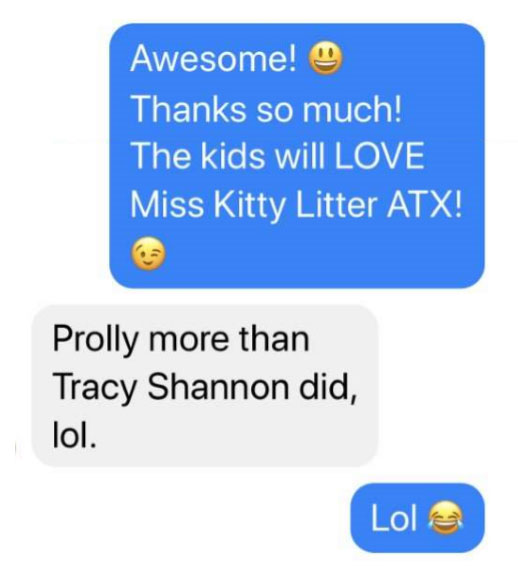 Lo and behold, Richardson passed the background check, even though Grape knew about his prostitution past, and Tracy had publicly announced it at a City Hall press conference.

Of course, because of the efforts of Texas MassResistance, Miss Kitty Litter was worried about possible protests at the elementary school. He even feared that parents might show up to try to stop the event! But the “Guybrarian” assured him that this school has more “progressive” parents, including the PTA, and there would likely be little or no pushback:

The Drag Queen library reading event was scheduled during “LGBTQ+ Pride Week” at the elementary school. The fact that an elementary school would have such an event reflects the mindset of the people running things. It was apparently a district-wide promotion in the Austin schools.

A "Pride Week" banner in the Blackshear Elementary School showing that it is being promoted throughout the school district.

A letter to the Blackshear Elementary parents was sent (or emailed) by “Mr. Grape, Guybrarian” about the upcoming ”LGBTQ+ Pride Week” reading event. He invited the parents to come and join their children at the event at the school library. 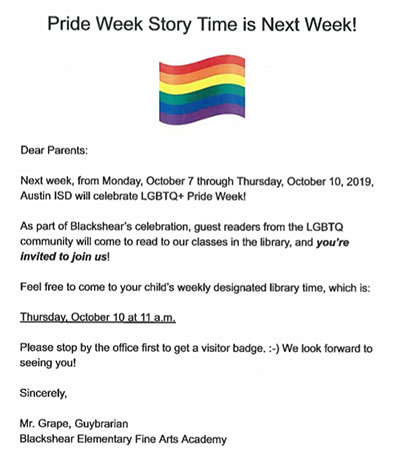 Here's the letter that was sent to the parents.

Classes would be coming into the library for the reading. The letter did not mention that a Drag Queen would be involved, but simply said,

“As part of Blackshear’s celebration, guest readers from the LGBTQ community will come to read to our classes in the library, and you’re invited to join us!”

It turns out that “guest readers from the LGBTQ community” referred to the two people who would be reading: (1) the Drag Queen and (2) an Austin School District Library Coordinator named Jenny Wren Pennington. Not surprisingly, Pennington is also an officer of the Texas Library Association “Queers and Allies Roundtable.” 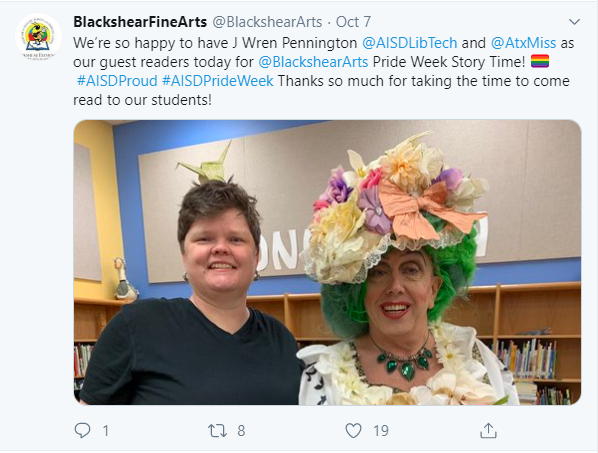 The Blackshear School tweeted this photo of Pennington (left) and "Miss Kitty Litter" at the reading event in the school library.

We were able to get a list of the books that were read to the children that day. The books all normalized and promoted LGBT behaviors to children:

At least one parent saw through all this beforehand and sent an email to the Blackshear principal, Rick Garner:

[My husband] and I do not wish for our son to participate in the LGBT library week. We feel that it’s inappropriate for any adult, regardless of their preference, to discuss his or her sexuality with minors, especially with small children.

The principal replied within a few hours. He basically lied to them about the readers being screened:

We will honor your request … Please know that our guests are only reading to our students. All of our guests have been screened through Austin Partners in Education. Our goal is to promote acceptance, especially during Pride Week.
Rick Garner, Principal

As we saw in the text exchange, Miss Kitty Litter was purposefully not properly screened by the school – but just the opposite. He was let in with school employees knowing about his criminal background – and ignoring it.

Roger Grape, the elementary school “Guybrarian,” certainly appeared to be a fairly aggressive LGBT activist. But it’s actually far worse than that. 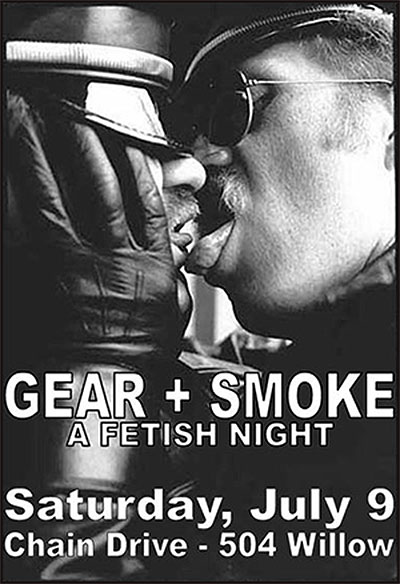 “… we welcome men who are interested in leather, rubber, uniform, sport, and all gear fetish to gather with us and connect with others.”

And just what do they mean by “gear”? Here's what the website says:

Roger Grape is a major figure in the group. Here’s how the website describes him: 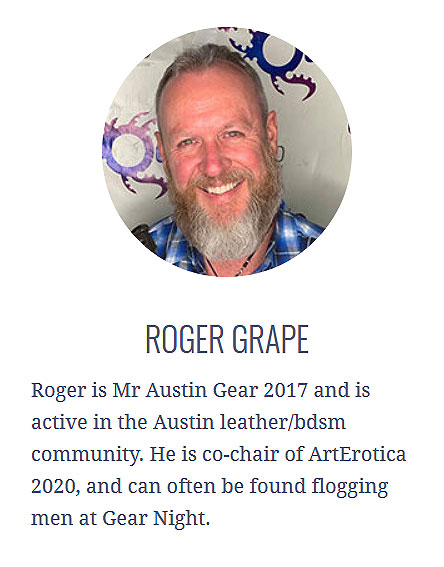 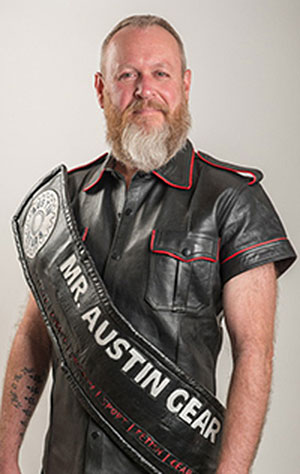 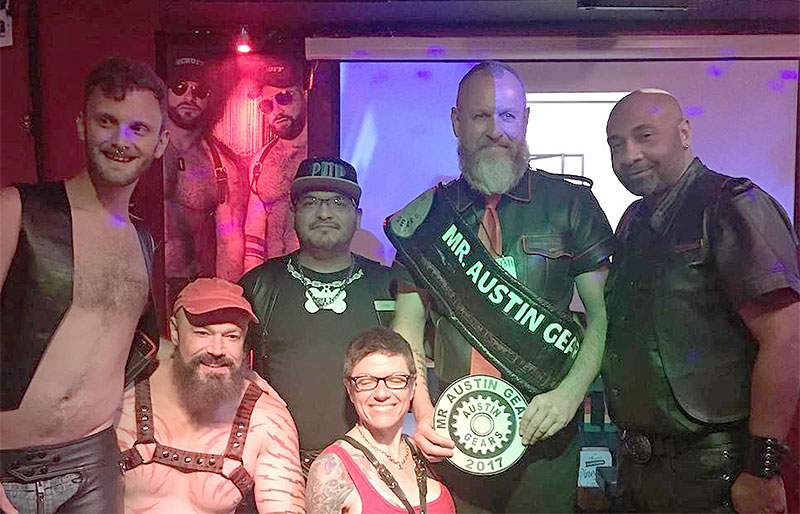 Grape with his "colleagues" in the fetish organization.

School obviously not bothered by all this

Should a person like this be working around children? (And why would he want to? The answer to the second question is in the larger issue of the homosexual movement's near-universal obsession with children and public schools.)

Shockingly, according to the FOIA material we received, Roger Grape has been an elementary school teacher since 2004, and has been the librarian at Blackshear Elementary since 2013. Clearly, the school district would have been able to see his BDSM/fetish activities in any cursory background check. None of this is hidden.

The disturbing fact is that the school officials – including the principal, Superintendent, and School Board members – don’t really see his bizarre activities as a problem.

Most people don’t realize that this general problem has been in schools across the country for a long time. And it is far worse than anyone imagines.

Over the past few decades MassResistance (along with other groups) has exposed enormous amounts of graphic and explicit LGBT programs, assemblies, course material, and library books targeting schoolchildren as young as Kindergarten age.

As much as this horrifies and outrages parents, they soon discover that teachers and administrators support it and have no problem at all with it. In fact, parents who even criticize it are usually met with disdain, hostility, and methodical intimidation.

From top to bottom, schools have attracted a frightening generation of employees. MassResistance will continue to help parents confront this.