Superintendent tells us: They have not (and do not intend to) implement that indoctrination program 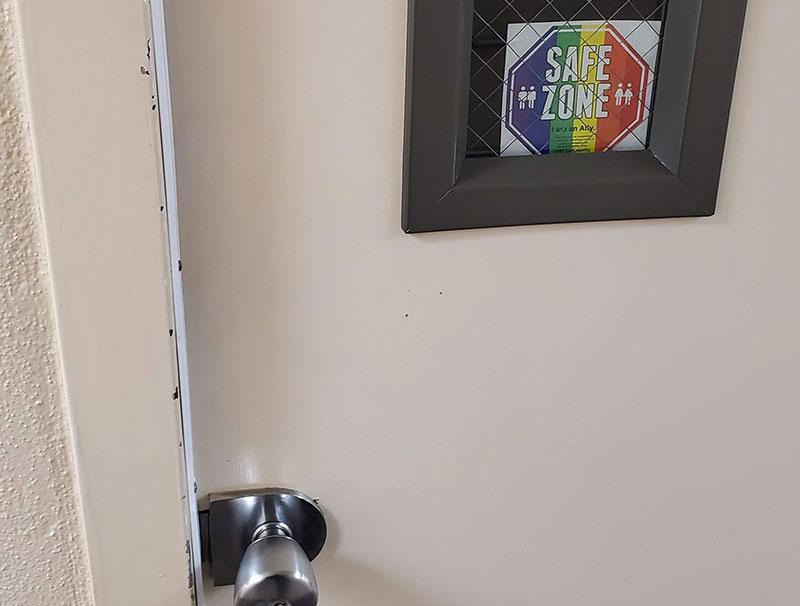 This offensive LGBT "Safe Zone" sticker was on this door in the Downey, CA, school administration building. We decided to get to the bottom of it!

In the early 1990s, Massachusetts was ground zero for the homosexual movement’s attempts to get their agenda into the public schools. The RINO Governor, Bill Weld, set up a “Commission on Gay and Lesbian Youth” to promote it. But the Massachusetts Legislature (which was less liberal then!) refused to comply. Every bill to force schools to include homosexual topics or programs failed.

Then in 1995 the movement discovered a new strategy, and everything changed. On March 5, 1995, Kevin Jennings, the founder of the national homosexual teachers’ group GLSEN, made a groundbreaking speech before a national LGBT conference. He announced that by properly “framing the issue” and claiming that it was all about “safety” LGBT activists were able to intimidate the Massachusetts Legislature into bringing homosexual programs into the schools.

Several months later, MassResistance reprinted and posted that speech to warn parents about what was happening. Unfortunately, the homosexual movement quickly gained momentum with that strategy before parents could react.

The contrived concept of student “safety” has now fueled the LGBT agenda in the schools for a quarter-century. It’s been used as a club to bully parents, politicians, and everyone else into submission.  Any negative discussion or criticism of the LGBT agenda is attacked as causing an “unsafe” environment. In fact, the opposite is true; supporting the unhealthy and dangerous LGBT lifestyle is terribly unsafe.

The LGBT movement didn’t rest with simply talking about “safety.” They leveraged it into an organized pressure tactic. Within a few years they began “The Safe Zone Project.” Participating schools have “Safe Zone” signs on classroom doors and windows, to signify that room is “safe” for LGBT discussion and acting out of behaviors, or “opening up” to a teacher or counselor (rather than to one’s parents). It’s a psychologically effective vehicle to normalize and indoctrinate LGBT ideology to children, under the false pretense of preventing bullying on school campuses.

Back in 2005 MassResistance first reported on the LGBT “safe zones” in local schools! 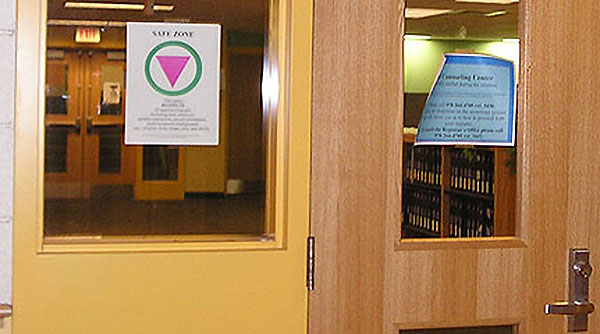 This photo from 2007 was taken in yet another Massachusetts school. By then it had spread across the state and in other states.

The Safe Zone Project (SZP) is a free online resource providing curricula, activities, and other resources for educators facilitating Safe Zone trainings (sexuality, gender, and LGBTQ+ education sessions), and learners who are hoping to explore these concepts on their own. 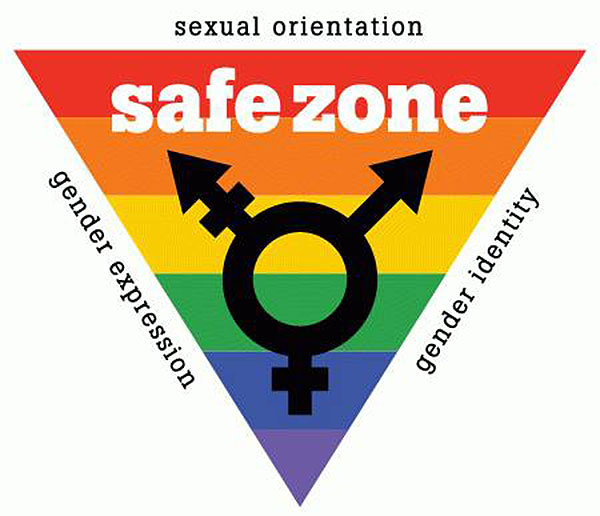 It's unfortunately been very successful and is now in schools across the country. Parents have long been stymied and heavily intimidated by it. But MassResistance has had enough – and is helping parents and families to fight back.

We recently reported that our Organization Director, Arthur Schaper, met with school officials last September at the Downey, California, school district’s main administration building. His purpose was to view the “Teen Talk” comprehensive sex ed curriculum that they had recently adopted. He exposed how graphic and radical it is. Subsequently, outraged MassResistance parents successfully forced it to be removed.

But as we also reported at the time, Arthur noted that there was a prominent LGBT “safe zone” sign on one of the doors inside that building. Why was it there? How many others were there? How pervasive was the “Safe Zone” program at Downey?  It was certainly disturbing.

But rather than do nothing and be intimidated, he decided to get to the bottom of it.

On Feb. 15, Arthur filed a FOIA (Freedom of Information Act) request to the school district to get some answers. The FOIA request said:

We’ve discovered your implementation of the Safe Zones program in the Downey School District Office. I request the following information:

1. The teacher/administrator training material presented for this program
2. The list of presenters and their qualifications
3. The date(s) when training presentation was presented to the board
4. The number of times that the program has been updated and/or retrained

The Superintendent responded to Arthur’s request, saying that they aren’t using it. Strangely, he referred to it as a “curriculum.”

Downey Unified does not use the Safe Zones Curriculum.  Therefore, none of the materials requested in your email dated 2/15/20 is able to be produced.

Arthur responded back to the Superintendent with the photo at the top of this article, saying:

This photo below captures a picture of the "Safe Zone" sign in one of the doors at the Downey Unified School District Main Office. Please explain this photo, then, if "Safe Zones" is not implemented in Downey Schools.

About a week later, the Superintendent answered:

Thank you for your inquiry. Based on our research the Safe Zones sign was put up numerous years ago by the previous occupant of that particular office. The current occupant did not know anything about the sign and removed it after discovery.

Presumably, any other “safe zone” signs there were taken down, also. But that’s a strange answer about a sign that was so prominent in that building. We wonder: Given their recent experience having to deal with MassResistance outrage from parents, did the Downey administration actually have the Safe Zone Project in place at Downey but not tell us about it – and then quietly dismantle it when we did our FOIA request?

In any case, this is the first time we’ve seen a school “Safe Zone” sign taken down because of citizens confronting it!

He filed requests with the nearby Santa Barbara and Torrance school districts. Both of them responded that they do not have Safe Zones or Welcoming Schools. That’s certainly good news!

However, we know that the neighboring Anaheim school district does have both programs. One difference that’s very obvious is that Anaheim is largely black and Hispanic – and Santa Barbara and Torrance are mostly white and Asian.

That doesn’t surprise us too much. As we’ve noted before, the LGBT movement seems to disproportionately target low-income, immigrant, and Spanish-speaking districts more intensely than wealthier white or Asian districts. Luckily, MassResistance does some of our best organizing in those districts – to help the parents who are most vulnerable!

We are adding “Safe Zones” to our list of LGBT school programs that need to be immediately eliminated! 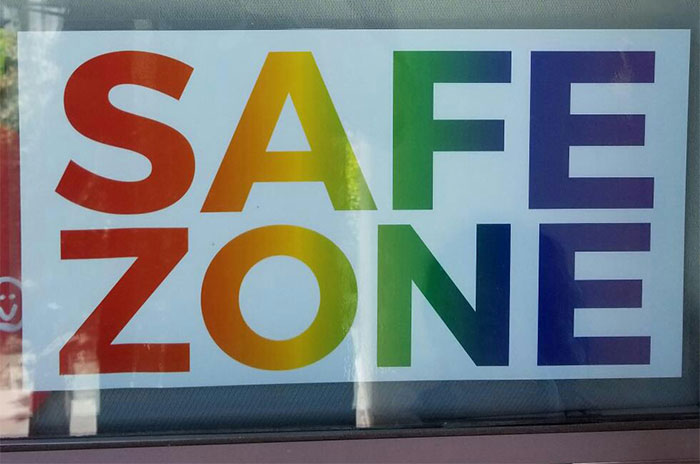 Our next stop – the toxic Safe Zones program in the Anaheim, CA, elementary schools. This sign is in the window of the Betsy Ross Elementary School in Anaheim.