Did the Massachusetts governor have actual legal power to shut down society over COVID-19? The answer seems to be: No. 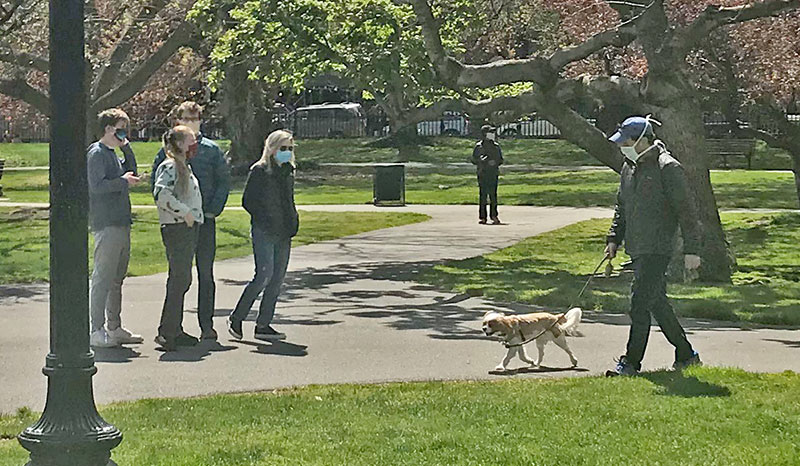 The cradle of liberty? In the historic Boston Common -- where the patriots and revolutionaries once walked -- people now wear masks in obedience to the Governor's orders. (We're surprised that the dog wasn't arrested for a violation!) [All photos by MassResistance]

Governors across the country are imposing harsh, sweeping, and often arbitrary statewide edicts on the basis of a COVID-19 emergency. But where did governors get these powers? Were they legitimately created by state legislatures, or are the governors (and local authorities) just dreaming them up as they go along? Most people don’t know. Sadly, few are asking this question. 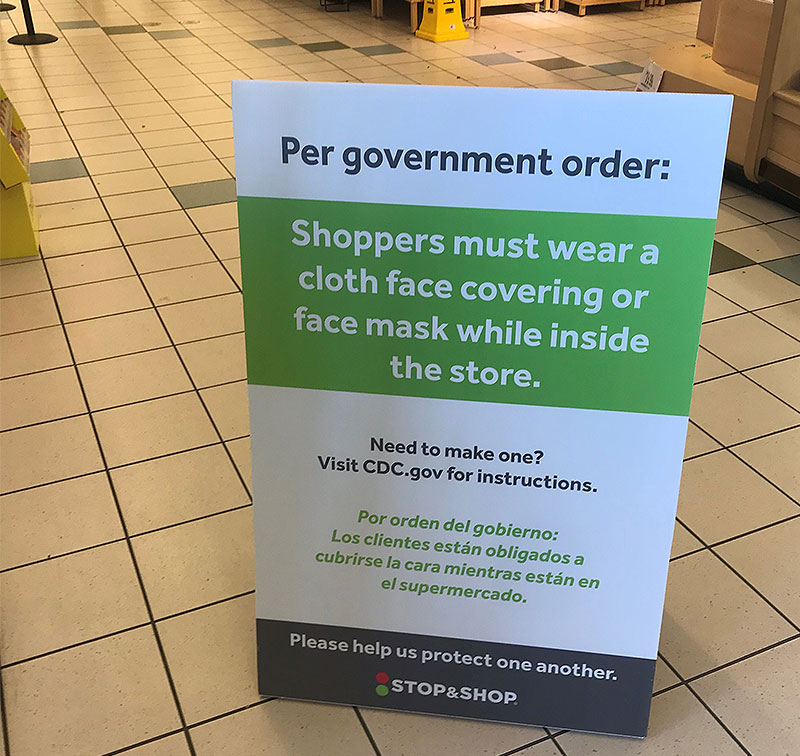 Sign just inside the main entrance of a supermarket in Massachusetts.

Over a decade ago in Massachusetts, MassResistance played a big part in limiting the governor’s “legal” powers during a pandemic. That successful effort applies to today’s situation. And it makes Governor Charlie Baker’s power grab even more disturbing.

The Massachusetts Civil Defense Act of 1950

On August 29, 1949, the USSR successfully detonated its first atomic bomb. Cold War panic quickly ignited across America. There were fears of a Soviet invasion of the United States. The following year, the Massachusetts Legislature reacted by passing the “Civil Defense Act – Chapter 639 of the Acts of 1950.”

The main stated purpose of the law was to give the state government a way to “effectively minimize the damage” from “attack, sabotage, or other hostile action” by “enemies of the United States.” The Legislature also included some other categories of disasters that cause physical damage: “disaster or catastrophe resulting from riot or other civil disturbance; or by fire, flood, earthquake or other natural causes.”

That law gives the governor the power to proclaim a “state of emergency” throughout Massachusetts. During the state of emergency, the governor is given extraordinary powers – and can supersede existing statutes if he chooses. Those powers, which are broadly listed in the statute, are quite frightening and many appear unconstitutional. They are clearly laid out to deal with enemy attacks, riots, etc. For example, cooperation with military and naval forces is described. Nothing in the law addresses or implies public health concerns or pandemics.

The “Pandemic Control Bill” of 2009 is filed

Fast forward nearly 60 years to 2009. There had been recent warnings in the medical community that an H1N1 swine flu epidemic would emerge that year and spread widely. The Mass. Dept. of Public Health (DPH) wanted to be able to declare a medical emergency and use extraordinary state powers to deal with it.

But it was clear to everyone that the Civil Defense Act of 1950 does not include “public health” emergencies. Another statute, MGL Ch 17 Sec 2A, does allow the governor to declare a “public health emergency” – but the powers it gives the state are very limited. The statute only allows the Commissioner of Public Health to establish vague “procedures” for those maintaining public health services.

So the DPH worked with the medical lobby and a prominent State Senator (who had close ties to the pharmaceutical industry) to create a far-reaching “Pandemic Control Bill” on a par with the Civil Defense Act.

Bill S2028, titled “An Act Relative to Pandemic and Disaster Preparation and Response in the Commonwealth,” was quietly filed in early 2009. For months it sailed under the radar. That April, it was passed by the State Senate unanimously.

MassResistance read the bill – and reacted …

Within a few months, Amy Contrada, our MassResistance researcher, noticed that this oddly titled bill had been gaining unusual momentum. When she looked it up and read it she was shocked.

The bill rewrote and powerfully strengthened MGL Ch 17 Sec 2A (referenced above). It reiterated that the governor could declare a “public health emergency” separate from the emergencies enumerated in the Civil Defense Act. Similar to the Civil Defense Act, it included a long list of broad (and clearly over-the-top and unconstitutional) powers that the governor could use to deal with that emergency.

Among other things, this draconian bill would have given the state the power to enter and search houses, take property, detain people, prohibit assemblies of people, require vaccinations, and much more – and it set penalties for non-compliance at $1,000 per day plus jail time. Some people were calling this the "Storm Trooper Bill" because of the frightening extra-constitutional powers it would give the state against citizens.

MassResistance published a full report on the dangers of the radical pandemic control bill, S2028. We also published a line-by-line analysis of the text of the bill.  In addition, we reported how the DPH Commissioner admitted in his testimony that the medical establishment and those close to “big pharma” helped write the bill. 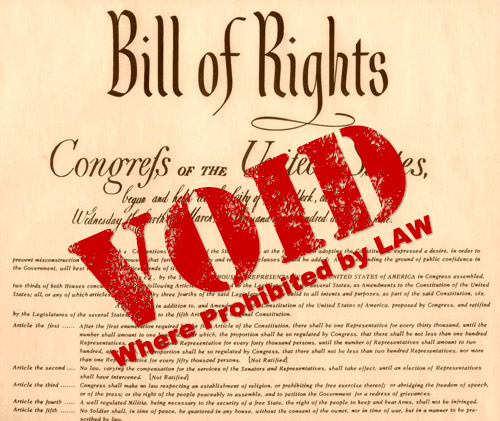 This is the direction that politicians invariably take if given the opportunity.

… And we successfully battled to stop it!

As the Massachusetts House of Representatives was preparing to take up Bill S2028, we got right to work. MassResistance mobilized hundreds of people across the state to demand that their State Reps reject the bill.

MassResistance also began a national media campaign about the bill to inform people. It was quite successful. Judge Andrew Napolitano did a segment on national Fox News about S2028. (Unfortunately, the video of that segment is no longer posted.) National conservative media such as WorldNetDaily also covered it.

The Massachusetts DPH reacted to MassResistance’s activism by staging its own intensive House lobbying campaign to get S2026 passed. Here’s our report on the hardcore DPH lobbying efforts.

But the public outrage was clearly rattling the House members. So on Oct. 8, 2009, the Democrat House leadership decided to fast-track it through. They brought it to the floor, renamed it H4275, and quickly added 17 amendments (which no one had time to read). Then the House passed it by 133-36. Here’s the MassResistance report on the new version, H4275.

But the fight wasn’t over yet. Since the House version was now different from the version than the Senate had passed, the bill went to a six-member conference committee to create a compromise version, which would be re-voted by both branches and sent to the governor for signing.

The bill’s proponents were jubilant. When a bill is sent to a conference committee, the whole process generally takes just a few days to resolve, get passed again by both branches, and then sent to the governor.

But not this time! MassResistance INTENSIFIED the pressure on the six-member conference committee. Even more angry people got involved! As a result, the bill stalled. Weeks and weeks passed. On Dec. 31, 2009, the legislative session ended. The bill was dead. And in the years since then, it has never come back. We had won!

And although the swine flu pandemic of 2009 was worse than the normal flu season, it was nowhere near the “public health emergency” that had been predicted by the Mass. DPH. No extra-legal measures were needed to deal with it.

So where did Massachusetts Governor Charlie Baker get his “legal” power to close the schools, close most businesses (and arbitrarily decide which ones may be open), close all churches, ban all groups of people and assemblies, order all citizens to “social distance,” require everyone to wear masks in public, and much more?

He has no legal authority for any of this. It’s all counterfeit. There is no actual “Pandemic Control Law” to use, so Baker is dishonestly relying on the old Civil Defense Act. If you look at any of his Executive Orders on the COVID-19, they reference the two laws described above – the Civil Defense Act of 1950 and MGL Ch 17 Sec 2A (which is still very weak).

As described above – and as the Legislature noted in 2009 – the Civil Defense Act does not include “public health” emergencies. And although the Civil Defense Act has a lot of extra-constitutional features, it does not allow the governor to close churches, close schools, or issue many of the other orders that Baker has so cavalierly dictated.

And how has the Massachusetts Legislature reacted? They largely support Baker’s actions, and many legislators have even encouraged him to go further.

It is worth noting here what really struck us back in 2009 when MassResistance activists were working to persuade the Legislature to reject that pandemic control bill: Not a single legislator cared at all about its Constitutional problems. Their mindset then (and now) was not to protect people’s liberties, but the exact opposite – to do whatever they can get away with. To them, the Constitution is something read in high school civics class but not something to seriously consider as government officials. They are instead swayed by the heavy hand of the legislative leadership, powerful special interests, or large numbers of very angry constituents. It’s a sad lesson that many conservatives still need to learn.

So now we are seeing lawless orders across the U.S. which – shockingly – large numbers of citizens seem content with. Too few are taking the time to understand what is really happening and challenge their officials.

Let’s remember Benjamin Franklin’s observation: "Those who would give up essential Liberty, to purchase a little temporary Safety, deserve neither Liberty nor Safety." The nation’s acquiescence will surely come back to haunt us. 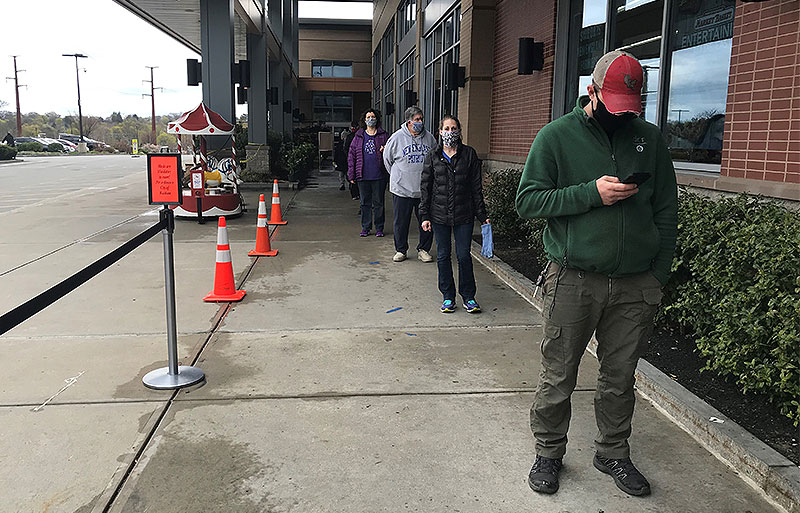 The new "bread lines." Masked shoppers line up the mandatory 6 feet apart outside a Massachusetts supermarket. The governor only allows a fraction of the normal capacity of shoppers to be inside.