Local police defended MassResistance when BLM tried to ban us from area. 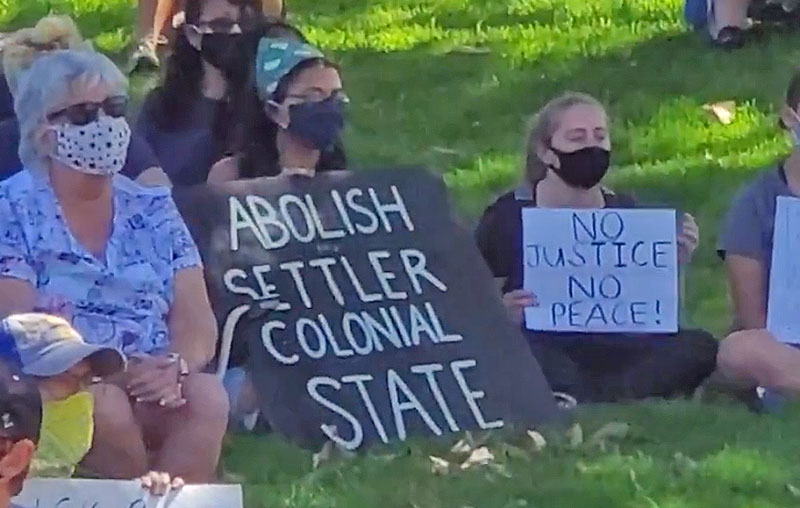 These are the messages that Black Lives Matters wants to bring into America's schools.

Even though school’s not in session, most people don’t realize that Black Lives Matter (BLM) is working hard in cities across America to push its radical agenda into the public schools. Left-wing teachers and administrators are opening the doors to them. Local students are being coached to propagandize the message to others.

But MassResistance is already confronting it! Earlier this month, that’s exactly what happened in one California city.

Black Lives Matter purports to be a “civil rights” group. But as their website and their public actions reveal, it is actually a heavily Marxist, anti-American, anti-family organization that has a sickening record of violence against police and others who disagree with them. It is heavily intertwined with the radical LGBT movement. It does not actually support “black lives” in any substantive manner. The public schools are the last place BLM should have any influence.

Last month, parents in El Segundo, CA, were alarmed to find out that a “Students for Change” rally – to be held across the street from the high school with high school and middle school students participating – was being promoted on social media. It was hosted by Black Lives Matter, and included the high school’s “LGBTQ Club.” 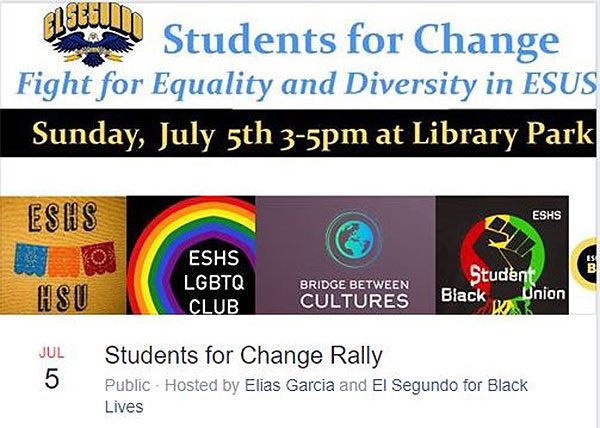 ESUS is "El Segundo Unified School District" - all the schools in the city.

What was the message that this radical group was bringing the kids of El Segundo? Would there be any counter information from our side?

After last month’s successful MassResistance counter-rally in El Segundo against BLM, local people were emboldened. A group of ten MassResistance parents, along with MassResistance National Organization Director Arthur Schaper, decided to go to this event, to find out what they were doing, and be heard! 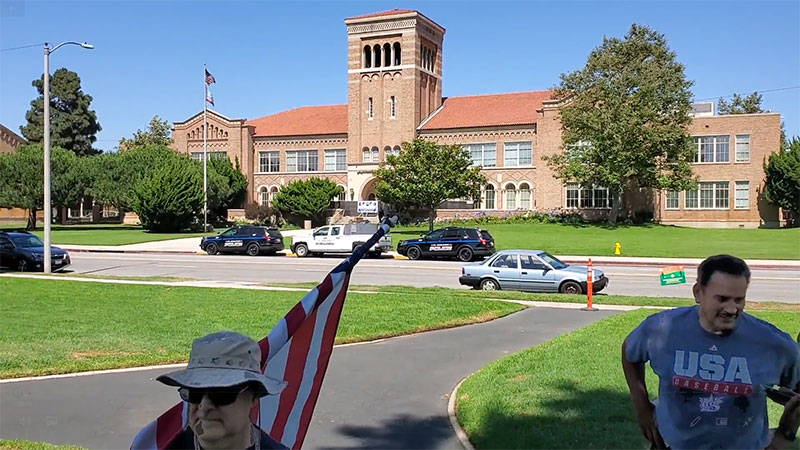 With El Segundo High School in the background, MassResistance parents come to the BLM rally.

The event included about 50 BLM activists. As in most BLM events, almost all of them were white adults, many holding anti-American and other combative signs. (There was a higher percentage of blacks among the MassResistance parents than in the BLM group!) There were also two police officers present.

Students (at right, near bench) address the BLM activists.

It became clear that the purpose was to bring in some local students who had already been taught BLM’s class warfare ideology. They would speak to the rally about what they would be doing to promote this in their schools, and especially among other students. The local BLM leaders were also there with their own speeches –expounding upon the “urgent” need to “reform” the local school policies and curricula. 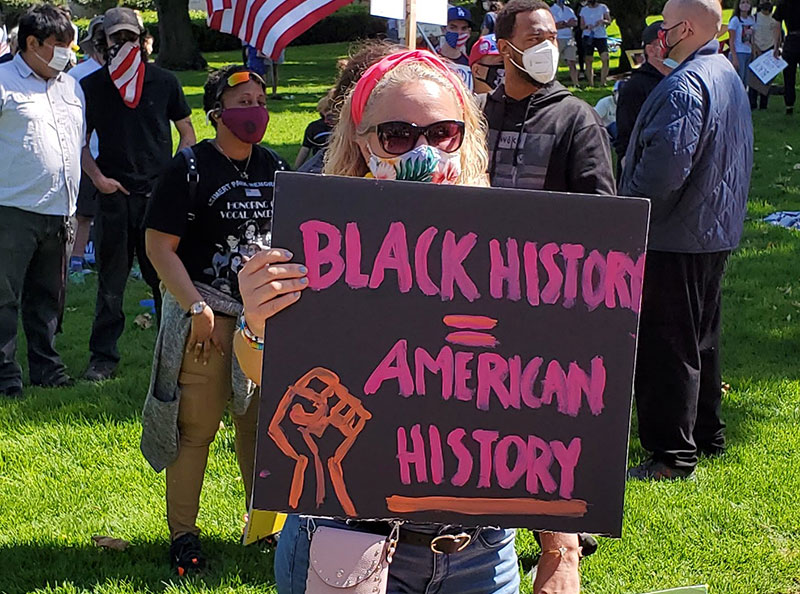 Note the clenched fist. The message seems to be that regular American History in the schools needs to be replaced. 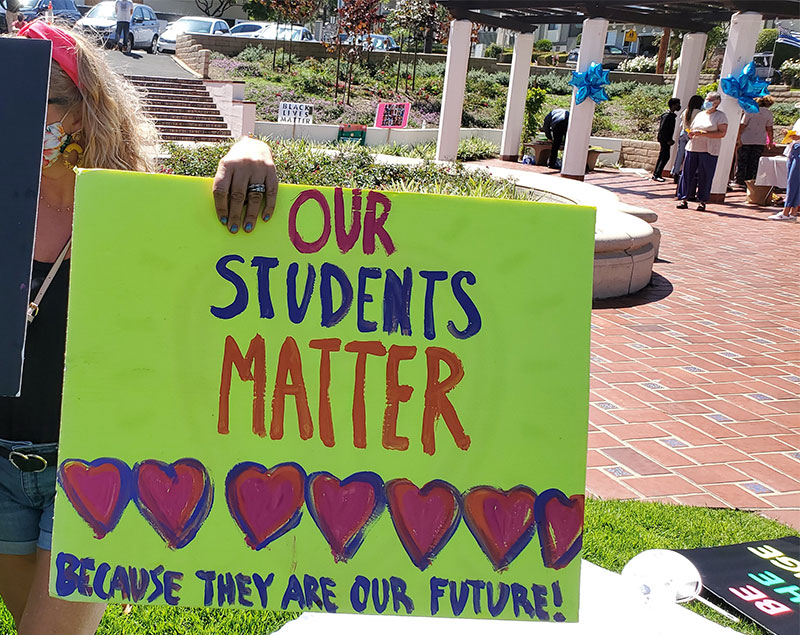 These people are very serious: Indoctrinating children now fuels the future of their radical movement.

It seemed a perfect day for propaganda – until MassResistance showed up!

Before the speeches began, Arthur and the some of his allies went into the BLM crowd to ask them – quite politely – about what their signs meant, what their political goals were, and what they were doing to help “black lives.” In other words, they tried to engage in some dialogue.

But instead, the BLM activists became angry and cursed in the most foul and disgusting manner. They had no interest in any reasoned conversation on the issues. The people holding signs couldn’t really explain what the signs meant. Legitimate questions just made them angrier.

These are people who thrive on intimidating others and forcing public officials to implement their bizarre ideas. But a few MassResistance activists pressing them with questions derailed the activists. Clearly, their movement isn’t driven by substantive ideas, but by emotion – and a hatred of normal society. 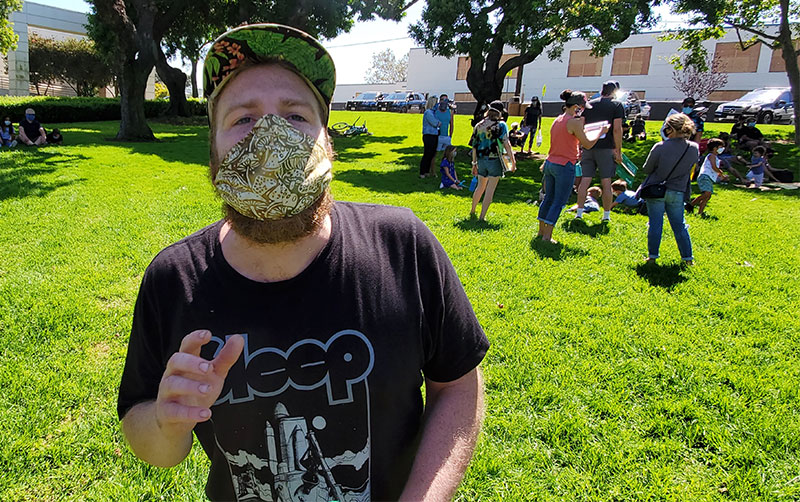 This man came up to Arthur and screamed an uncontrollable rant of profanity (it seemed every other word was f***.) and veiled threats. These are the people who want to influence your children in the schools. 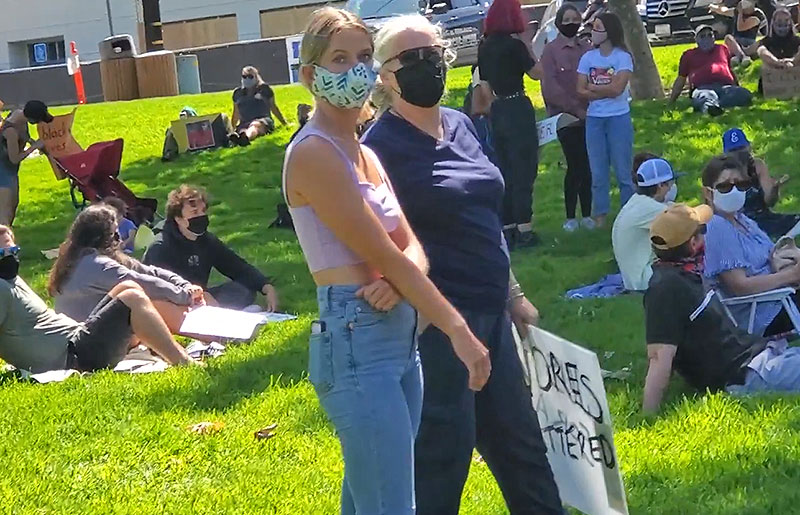 Arthur politely asked the woman holding the sign what it meant. She ddn't seem to know. Instead she screamed that he was an a**-h*** and walked away. 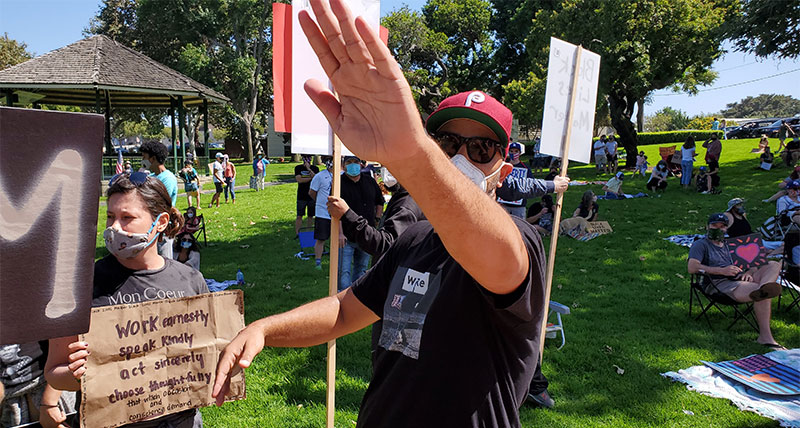 The BLM leader got in Arthur's face and ordered him to leave, threatening legal action. Arthur stood his ground.

Arthur told him, “There is no such law. I can be wherever I want and talk to whomever I please. Go ahead and get your lawyers.” The BLM leader called the police over. The police agreed with Arthur. So the BLM leader stomped away, back into the crowd.

At one point the BLM people started blocking Arthur’s camera when he was taking photos – and the police intervened and told them to quit it. 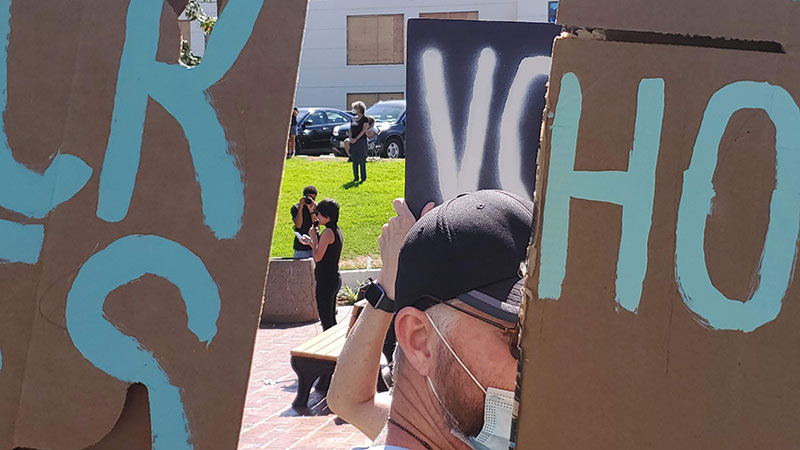 Trying to block the MassResistance cameraman, until the police intervened. 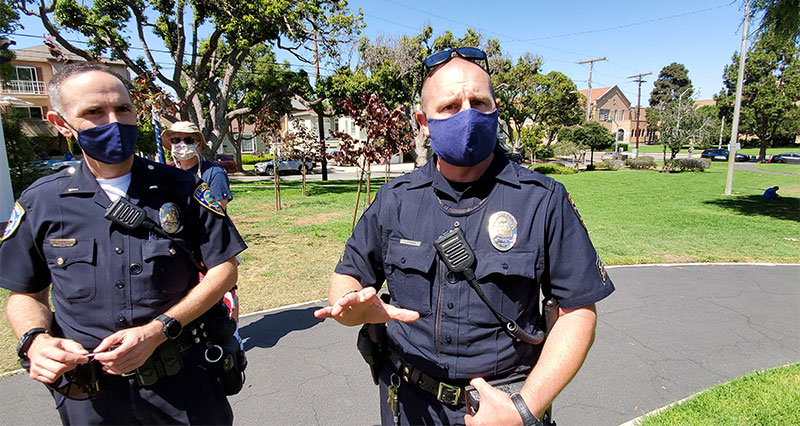 The police officers knew that we were going to defend our rights, and were very reasonable.

It’s not an exaggeration to say that the speeches were largely incoherent statements about the “systemic” racism, homophobia, and transphobia in El Segundo – a bizarre twist on the traditional Marxist class struggle rhetoric. In particular, the schools are full of people who “are addicted to bigotry and racism.” They did not try to contain their hatred of American society.

Several high school and middle school students gave speeches. About half of them said they were “LGBTQ.” They whined about racism, “classism,” “transphobia,” or “homophobia” that kept them all from being “who they really are.”

One black middle school boy told the crowd that because of the white majority in El Segundo, he used to think of himself as white and would laugh at jokes made against black people, then he realized that he was “black only in skin color” and “white in every way but skin color.” It fits right in with the BLM talking points.

One white girl said that the “systematic racism” in El Segundo was so bad that it is now “the fifth most racist city in California.” (Arthur asked where she got that statistic, but she refused to answer.) A lot of macroaggressions every day at school, she said. And they droned on and on.

The only thing that can fix all these terrible social problems, the students agreed, is the cultural cleansing that the BLM demands the schools undertake. 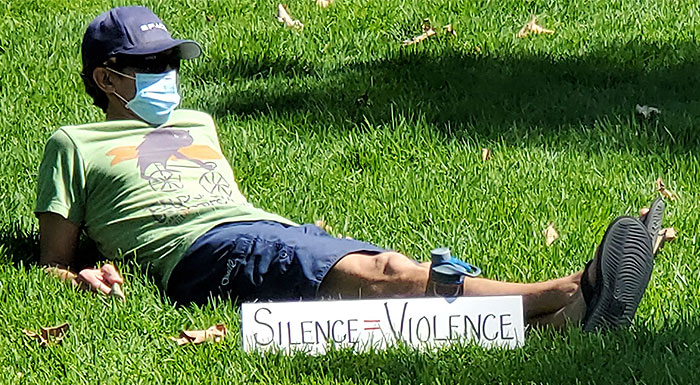 Does this mean that anyone who doesn't mouth the BLM mantra will meet with violence? It seems that way.

At the end, the BLM leaders gave their own speeches, which were mostly more race-baiting nonsense, including such gems as “Suppose a group was laughing at your race – starting in elementary school?” It would have been laughable if these people weren’t so deadly serious. 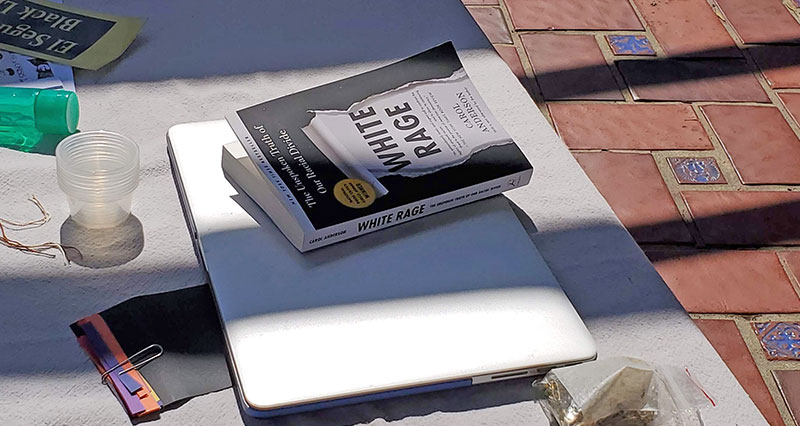 Just in case the BLM activists forgot their lines, they brought their handbook with them!

A dialogue on race?

A theme repeated by a number of the students in the rally was: “It’s time to start having those hard conversations about race, sexuality, and systemic racism.” And we definitely want to do that! So at the end of the event, Arthur and a few other MassResistance activists engaged in spirited discussions with some of the students. Some of them took up Arthur’s challenge to have those “hard conversations.” 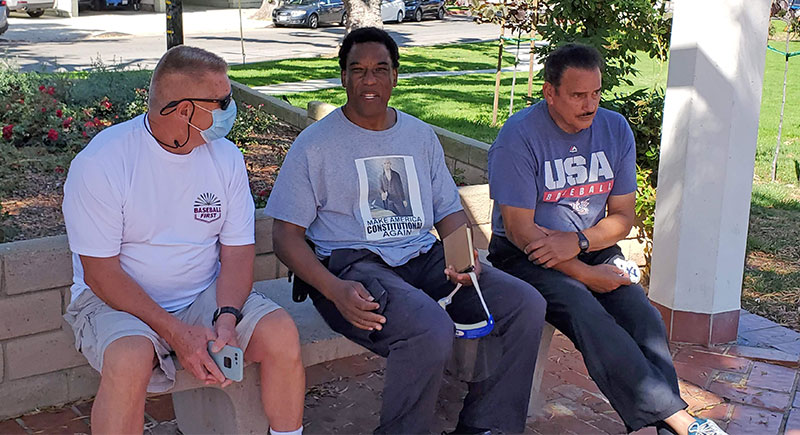 These three MassResistance parents weren't afraid to exchange some ideas with BLM.

But before long one of the BLM leaders came up to the students to escort them away. She seemed worried that some of them might start thinking for themselves and stop believing the BLM talking points! One of the students walked back to our activists and continued the discussion! A victory for our side? In some ways it’s BLM’s biggest nightmare! 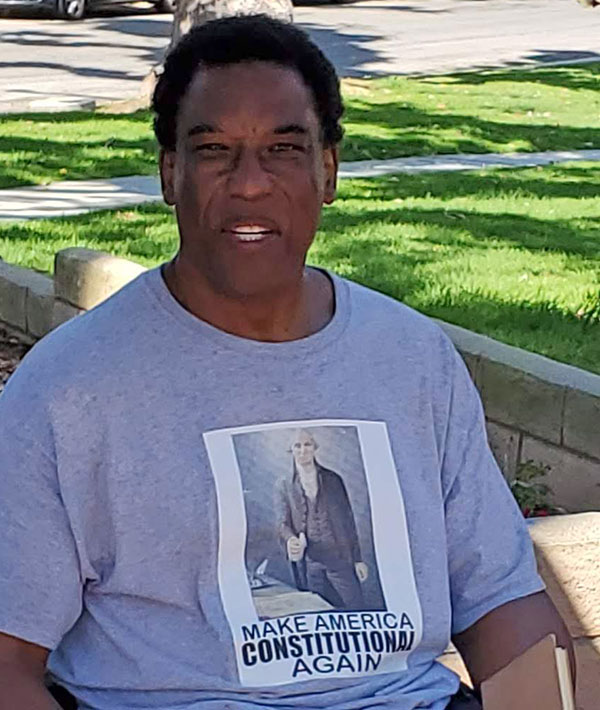 BLM’s targeting of the public schools is very aggressive and must be taken seriously. It uses civil rights as a Trojan horse for its radical agenda. Its connection with the LGBT movement is not coincidental.

Black Lives Matter is largely run by angry white people whose hatred of society (and anyone who disagrees with them) seems sociopathic. They behave like classic bullies. They thrive on intimidating and attacking people, especially in a crude and vulgar manner.

But they are weak and cowardly when confronted. Pro-family people must stand up to them.

And in this case, the El Segundo police were extremely accommodating to MassResistance. They had seen us in action about ten days earlier when we stood up to Black Lives Matter – and were also not afraid to stand our ground to the police when we were in the right. They clearly respected that. When they saw Arthur this time, the first thing the police officer said to him was, “Nice to see you again, sir. How was your Fourth?” And they stood by him against the BLM thugs.

Pro-family people need to learn from this. The “culture war” flame has been turned up a lot higher!