Issue is reminiscent of MassResistance’s nationwide speech in Jamaica in 2013. 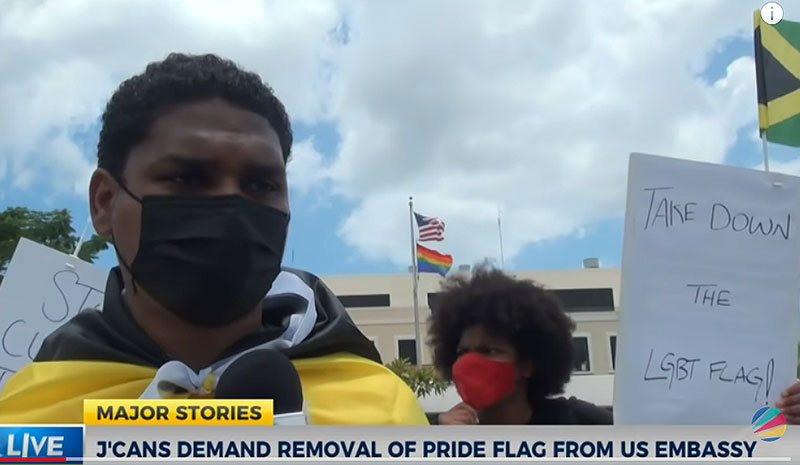 Protesting the offensive LGBT flag outside the U.S. Embassy in Kingston, Jamaica.

In Jamaica, the pro-family movement is serious! Since the Biden Administration began flying the LGBT “rainbow flag” outside the US Embassy there (as well as others around the world), local citizens have been outraged.

The Jamaican Coalition for a Healthy Society (JCHS), the nation’s largest pro-family group, has been regularly protesting outside the front of the embassy demanding that the flag be taken down.

The group says that the United States’ efforts to push the LGBT agenda in their country represent the worst kind of cultural imperialism. As one JCHS spokesman told the news media, the US Embassy publicly flying the LGBT flag is “a symbol of disrespect on Jamaican soil” and “an insult to our country.” 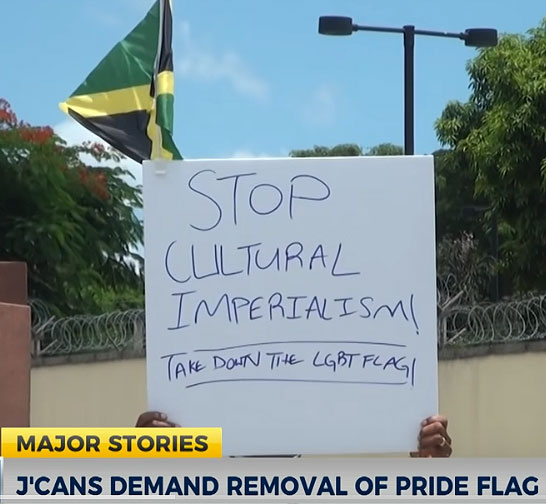 Describing it accurately (with the Jamaican flag in the background).

Furthermore, the spokesman said, this violates the 1961 Vienna Convention on Diplomatic Relations which outlines that foreign embassies must respect the culture of the host country and not attempt to interfere with the country’s internal affairs.

The Advocacy officer for JCHS did not mince words when interviewed:

That’s what’s being said across Jamaica. We couldn't have put it better! 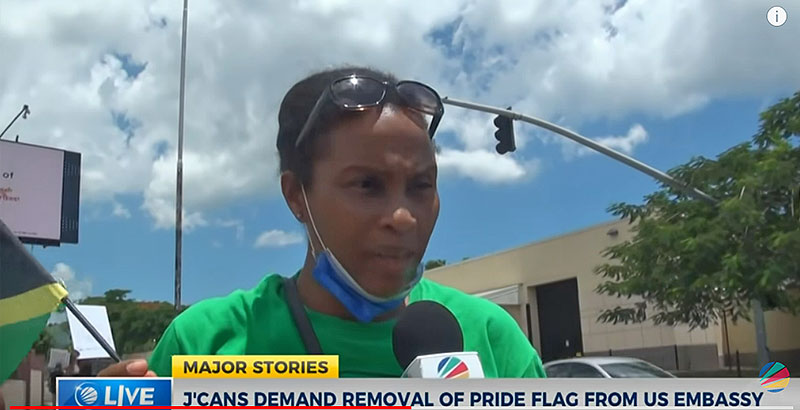 The Advocacy Officer for the Jamaica Coalition for a Healthy Society speaks to the TV reporter.

The group plans to continue protesting until the US Embassy removes the flag. At this point – in true Biden Administration arrogance – the Embassy staff won’t even respond to their complaint.

The 2013 speech that Brian Camenker of MassResistance gave in Jamaica!

Back in 2013, the Jamaican Parliament was considering repealing the country’s long-standing so-called “Buggery Law,” which makes homosexual relations illegal. To help raise awareness of how this could affect society down the road, the Jamaican Coalition for a Healthy Society invited Brian Camenker of MassResistance to come to Jamaica. For a week, Camenker helped people organize and worked with the Coalition’s leaders. During that week, Camenker was the main speaker at a large rally in Emancipation Park in Kingston. Over 400 people attended. He was introduced by Dr. Wayne West, the president of JCHS, and gave a speech that was broadcast live across the country.

Read our full report from 2013 on that event. It was a great evening and (from what we heard) our involvement made a difference!

Despite a big lobbying effort by foreign LGBT forces, the people of Jamaica forced their Parliament keep the “Buggery Law” in place, and it is still on the books. Of course, this drives the pro-LGBT international media crazy, and they periodically write hysterical articles wailing about it. But JCHS continues to be a strong pro-family force on the island!

This should be what everyone is doing.

The rainbow “pride flag” is not innocuous. It is the political symbol of a movement that hates the Bible and Christianity and seeks to normalize unnatural and medically dangerous behaviors.  Those who fly that flag pretend to claim it’s about “inclusivity.” But they know exactly what the real message is that they’re sending. It is used to represent (and inspire) raw power by the LGBT ideology over those who disagree or hold traditional beliefs.

The Jamaicans (and others in Latin America) get it. But Americans and others are often too confused or fearful to do anything but become more downtrodden. And that makes our adversaries act even more boldly against us.

Unfortunately, this particular problem is not new. Even President Trump’s Secretary of State Pompeo let the LGBT flag fly at our foreign embassies (See our 2018 article here.)

If you see this at your school, city hall, a local company, or anywhere else, complain loudly and protest! Over the last few years, across the US and even in Canada MassResistance has forced several schools, companies, and others to remove their “pride flags.” (For example, this past June we pressured the Westminster, CA, City Council NOT to fly the “pride flag” over City Hall, as they had planned to for “Pride month.”) That movement needs to spread!

Some good news is that one of our allies in Congress, Rep. Marjorie Taylor Greene - who previously was a MassResistance activist - has filed legislation to mandate that only the American flag flies over U.S. Embassies and other government buildings.