When legally required, Justices Ginsburg and Kagan failed to recuse in the Obergefell “gay marriage” case 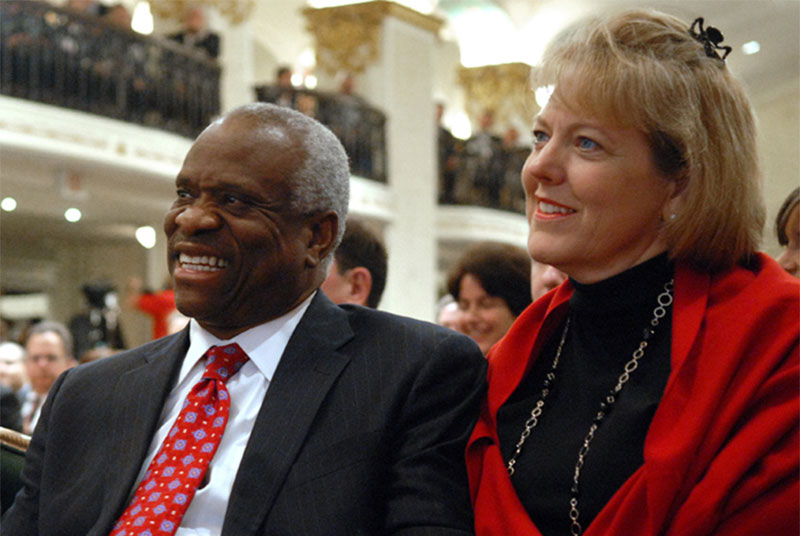 U.S. Supreme Court Justice Clarence Thomas and his wife Ginni Thomas are under attack by the leftist media.

The latest political ploy by the leftist media – attacking Supreme Court Justice Clarence Thomas and his wife Ginni Thomas – only magnifies their unprofessionalism and dishonesty regarding critical matters before the country.

Over the last several weeks, a flood of vicious attacks on Justice Thomas and Ginni Thomas have been published. The clearly coordinated assault includes over a dozen major outlets, such as The New Yorker, The Washington Post, The New York Times, Business Insider, The New Republic, CNN, NPR, and ABC News.

They are not hiding the purpose of their effort. They want to force Justice Thomas to recuse himself from a broad range of upcoming Supreme Court cases.  They are claiming that Ginni Thomas’s involvement in conservative groups requires her husband’s recusal.

For decades, Ginni has worked with organizations that bring together conservative leaders and groups, helping them share ideas and information. These mainstream media articles attempt to portray her involvement as “dangerous” and rant hysterically with blatantly false “facts.” Fortunately, these lies are quickly being exposed for what they are.

The media’s foul attempt at intimidation will ultimately go nowhere. There is ample legal precedent allowing spouses of judges to be politically active – and spouses of the leftist judges have been especially so.

But let’s look at a recent case where Supreme Court Justices’ refusal to recuse themselves when required led to horrible consequences for the nation – and the media simply ignored it because it suited their ends.

In the 2015 Obergefell v. Hodges case, the Supreme Court invented a “constitutional right” of so-called “same-sex marriage.” It was decided by a mere 5-4 vote. Justices Ruth Bader Ginsburg and Elena Kagan both voted with the majority.

The federal law on recusal (28 U.S. Code § 455) for the lowest courts up to the Supreme Court states:

Any justice, judge, or magistrate judge of the United States shall disqualify himself in any proceeding in which his impartiality might reasonably be questioned.

Before Obergefell, Justices Ginsburg and Kagan had publicly performed same-sex “weddings.” Obviously, they were not impartial on the issue.

Ginsburg performed three such “weddings” in 2013 and another in 2014. Ginsburg told people that the acceptance of “same-sex marriage” reflected the “genius” of our Constitution. Shortly before the Obergefell hearing in 2015, she told Bloomberg Business News that she believed Americans were ready for gay marriage. 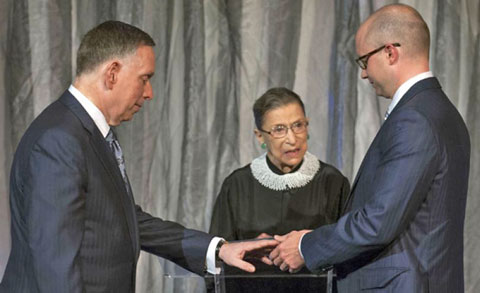 Supreme Court Justice Ruth Bader Ginsburg officiates at a same-sex “wedding" on August 31, 2013. She told the Washington Post, "I think it will be one more statement that people who love each other and want to live together should be able to enjoy the blessings and the strife in the marriage relationship." [Fox News photo]

In 2014, Justice Kagan presided over the “wedding” of her former (male) clerk to another man. Moreover, Kagan’s aggressive advocacy for LGBT “rights” goes back to her years as Dean of Harvard Law School (2003-2009), and was thoroughly documented in a MassResistance report. 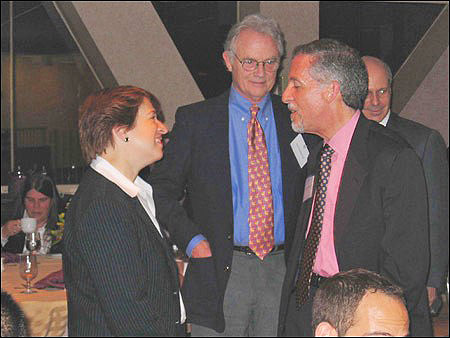 In the months preceding the April 28, 2015 hearing on Obergefell, numerous pro-family groups tried desperately to bring up the legal imperative that Ginsburg and Kagan recuse themselves. But the groups were ignored by both the Court and the mainstream media.

Finally, on the day before the April 28 hearing, the Foundation for Moral Law filed a formal Motion for Recusal of Ginsburg and Kagan laying out the issue in detail. It was followed by another Motion for Recusal filed by pro-family activist Dr. Steven Hotze. These documents were also made available to the media. These efforts were ignored as well.

Paradoxically, Supreme Court Justices are usually scrupulous in avoiding the appearance of impropriety. They regularly recuse themselves from cases based on relatively mundane issues, such as comments they have previously made or their own past employment. For example, Kagan recused herself from several cases involving the government because she had previously served as Solicitor General.

Obviously, “same-sex marriage” was such a profound issue that its advocates felt they couldn’t let federal law and the requirement of an impartial Court to get in the way of “progress.” And so The New Yorker, The Washington Post, The New York Times, Business Insider, The New Republic, CNN, NPR, and ABC News, and all the rest blatantly ignored it. Yet now they are wailing over the flagrantly phony charges against Justice Thomas.

It should also be noted that, shamefully, the conservative media have overwhelmingly avoided reporting on this – both in 2015 and in the current context. Unlike the Left, they aren’t overtly promoting “same-sex marriage.” But they are revealing their cowardice (they don’t want to appear “homophobic”) and collaboration (they have no problem with sodomy). However, the truth still needs to be told.