The right strategies from MassResistance made the difference, says local leader! 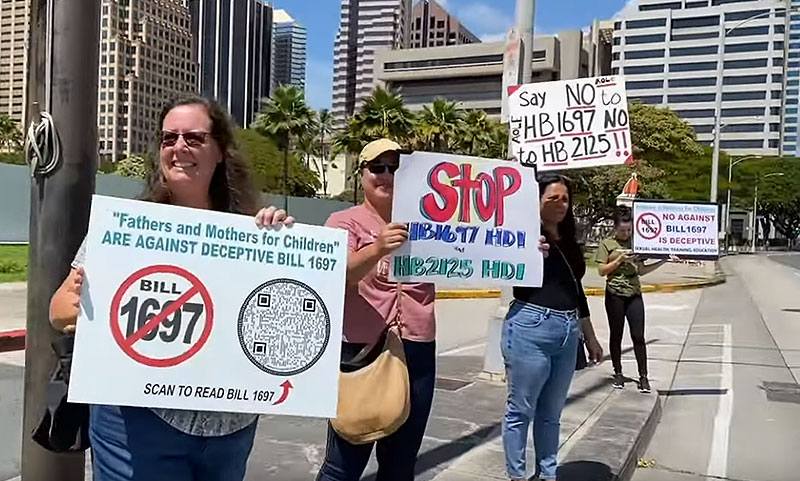 There were continuous protests by parents in downtown Honolulu near the State Capitol.

Two of the most radical bills we’ve ever seen were introduced in the Hawaii legislature this past January. Quickly gaining momentum, both quietly passed in the House in early March. They needed to be stopped in the State Senate!

It would have dovetailed with existing statutes to include “harassing or insulting electronic communications.” Thus, sending “insulting” emails to your School Board member (or posting criticisms on social media) could get a parent in legal trouble.

Outrage across the state – parents organize

The outrage against these bills across the state was fierce. Two parents, Art and Peggy, formed a fast-growing statewide group, Fathers and Mothers for Children, to mobilize people against these two bills.

On March 7, 2022, the group held a rally against HB 1697 at the Hawaii State Capitol in Honolulu. Over 100 people attended. It was a rousing event, and included speeches by prominent pro-family leaders and a State Representative. 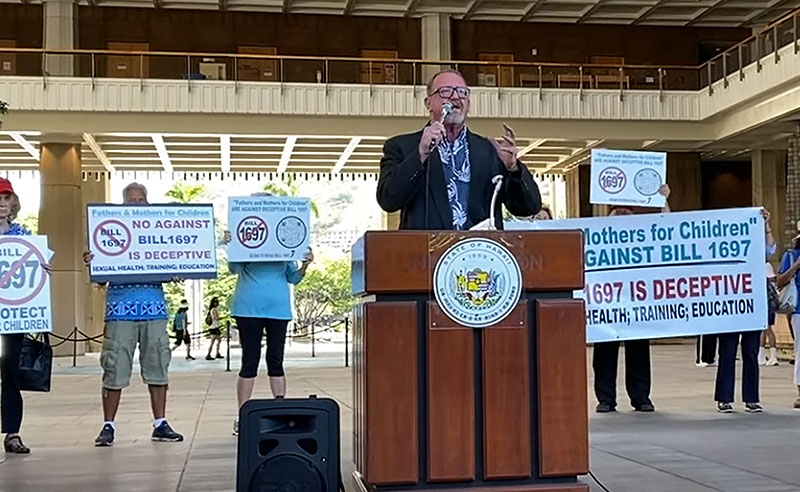 A week later, on March 14, the group organized a march through the streets of Honolulu to the State Capitol. Hundreds of people participated. When they reached the Capitol, there was another rally with several local speakers. 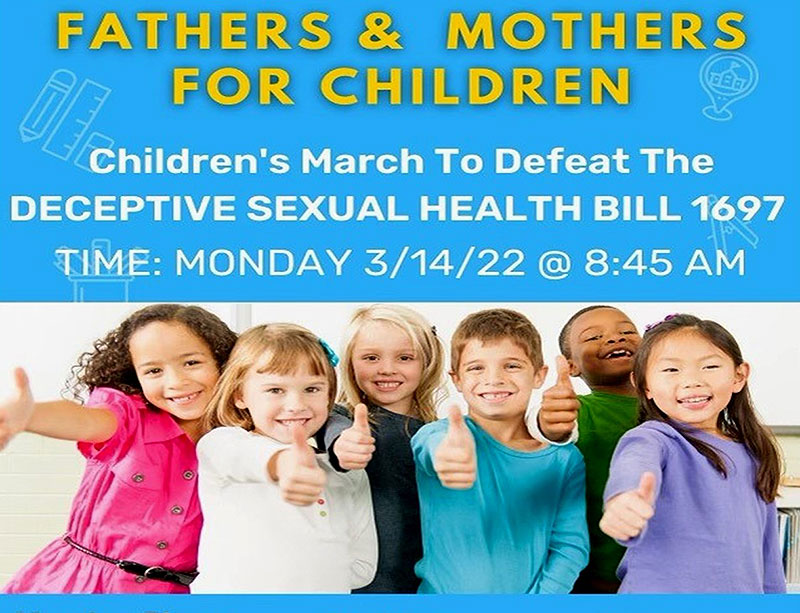 Protesters march through Honolulu to the State Capitol on March 14. 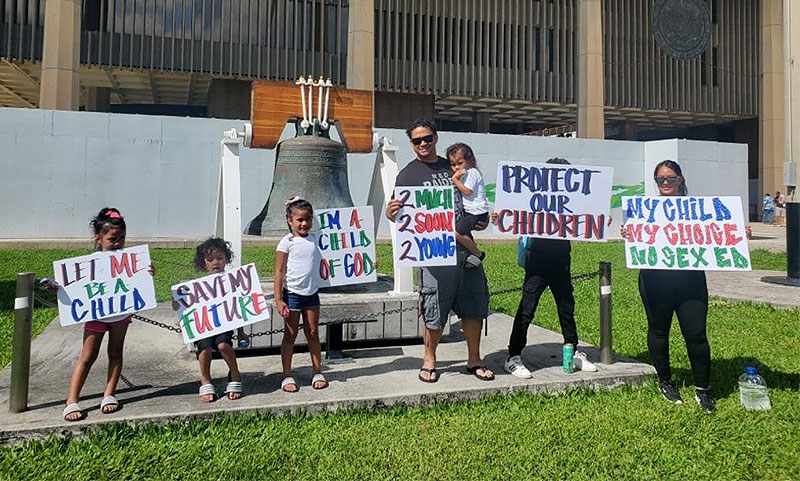 A family makes a statement outside the Capitol.

MassResistance is no stranger to Hawaii. Back in 2009, we helped stop a “civil unions” bill in the Hawaii Senate. (Even the Boston “gay” newspaper complained about MassResistance’s involvement there!)

In 2013, MassResistance worked with Hawaii activists in a huge battle to attempt to stop “gay marriage” from being imposed by the Legislature.

We are still in touch with many of the activists we worked with back then. So on March 10, 2022, one of them – Susan – contacted us for some strategic help.

After studying the situation, including the fact that both bills were now in the State Senate, we advised Susan that the group should immediately: (1) get politicians who are currently running for office to show up and publicly support the parents; and (2) target the districts of the Senators who are pushing the bad bills.

They took our advice. Here’s what Susan told us on March 25:

We used those two suggestions. We got politicians involved and I think that is what helped get the word out to a larger group. Candidates running for office did come and they participated in our events. We had a candidate for Governor and a very popular candidate for Lt. Governor show up and both spoke. And we singled out three districts that we targeted for rallies and sign waving.

Victory: Both bills were stopped in the Senate!

And everyone’s hard work paid off! On March 24, both bills failed to move forward in the Senate and are now dead. It happened very quietly. The parents had to call the Capitol to get the official word. “I imagine that there will be efforts to resurrect these bills next year but we'll be watching,” Susan told us.

There was also a bizarre resolution in the House of Representatives that almost passed. It had no legal implications, but it still promoted a very dangerous policy.

HCR 138 stated that Hawaii’s “educational materials and practices do not reflect the range of gender expressions and sexual identities that exist” and that “teachers do not understand diverse gender and sexual orientations.”

Therefore, to fix this “problem” the resolution requested that the Hawaii Department of Education create a “student-led working group” to find ways to push LGBT subjects more directly in Hawaii’s schools. That would include “peer to peer sexual health” – which usually means homosexuals grooming other children.

Since the House had earlier passed the two anti-family bills, our side was not confident we could stop this, either. But it seems that the resolution got tripped up by the growing parental outrage. Though it had already passed one House committee, on April 1 it quietly died in another House committee.

A big contribution that MassResistance makes around the country is to help parents with an aggressive and effective strategy to achieve their goals. Most parents have a lot of great energy for fighting the Left’s horrible attacks on their children, but little experience in the right way to go about it. The Left usually comes in with a wealth of experience and tactics. We help to bridge that gap!