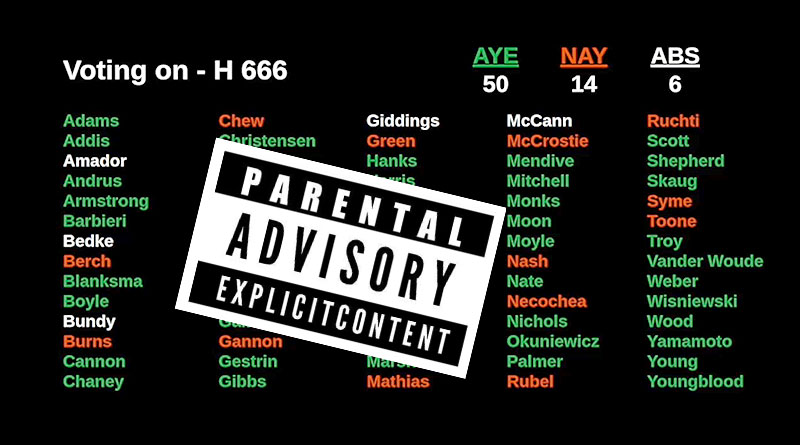 The bill to keep obscene material from children in schools and libraries passed the House overwhelmingly. But then the RINOs in the Senate blocked it. So conservative legislators fought back!

On the last day of the legislative session, conservatives in the Idaho Legislature cut nearly $4 million from the state’s library funding. They also created a legislative working group to protect minors in libraries from obscene material.

This was done in reaction to the fate of two important bills to protect children from the LGBT movement that had passed the House. RINOs (“Republican In Name Only”) in the Idaho State Senate leadership killed the bills without even giving them a hearing. Idaho MassResistance activists worked closely with conservative legislators throughout the process.

Two years ago, lawmakers in Idaho reached out to MassResistance for help to successfully pass into law two key bills derailing the transgender agenda in the state.

As a result: (1) Idaho became the first state in America to keep males out of women’s and girls’ sports. (2) Public documents such as birth certificates and drivers' licenses must reflect the person’s biological sex, not a contrived “gender identity.”

Iin addition to working with lawmakers, MassResistance also helped counter a massive propaganda campaign from the LGBT lobby and pressure from large corporations opposing these bills.

This year, another group of Idaho legislators and activists asked MassResistance for help in passing two more pieces of legislation:

1. H675 – Ban chemical and surgical sex mutilation of minors for “gender identity” purposes. (Passed the House; killed in the Senate)

Children across the country have been horribly disfigured by this medical quackery. The bill would have provided criminal penalties for taking children out of state to undergo these procedures.

Idaho MassResistance activists worked with sponsors and other legislators. They also gathered key expert witnesses, including physicians and people affected by “transgender” surgery, to testify at the public hearing via Zoom.

MassResistance’s influence was definitely being noticed in the Idaho legislature. At one point during the public hearing, a Democrat State Rep. grilled one of the supporters of the bill demanding to know, “Are you familiar with a group called MassResistance? Did they play any role in reviewing this bill, drafting language, providing any of the terminology?” (The person said he knew about MassResistance. But he said that we had no role in actually drafting the legislation, which is true.) 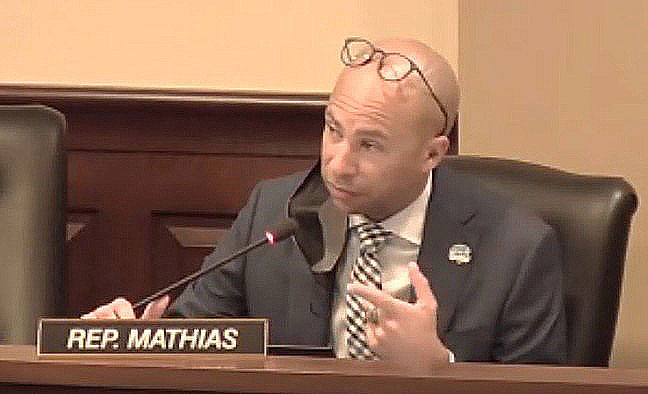 Democrat State Rep asks witness during public hearing: "Are you familiar with a group called MassResistance?"

2. H666: Repeal the obscenity exemption for schools and libraries. (Passed the House; killed in the Senate)

But in recent years, radical adults have been stocking those shelves with some of the most sickening pornography imaginable, including books that encourage children to engage in homosexual sex acts and sex-change “gender” procedures.

This compendium of examples was provided to Idaho legislatures. (This will shock you!)

Thus, this bill would remove that exemption. In fact, legitimate works of art would not fall under the current obscenity laws. So this bill would only affect actual pornography and obscene material. Similar bills are being filed across the country by pro-family groups and conservative legislators.

MassResistance helped provide a number of expert witnesses to testify in favor of the bill, including a local Idaho library board trustee. Various legislators also brought in other local board trustees who supported the bill.

Not surprisingly, the LGBT movement and the pro-LGBT library associations were furious at this bill, and fought hard to keep pornographic books available to children. They even argued that sexual and homosexual material is somehow “good” for young children. 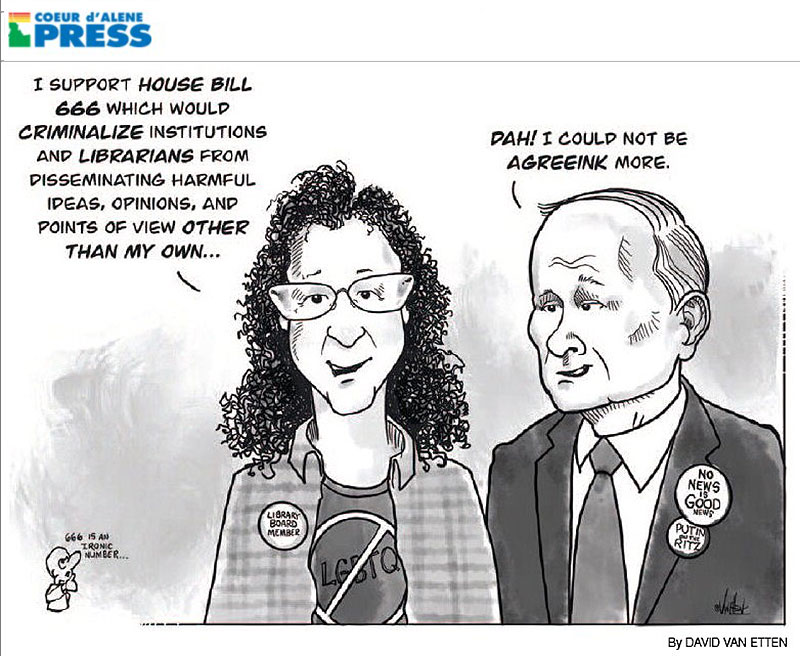 Anger from the Left: Absurd political cartoon in liberal Idaho newspaper attacking the Library Board trustee who supported H666 - and associating her with Vladimir Putin!

The successful fight in the House

Starting in mid-February, MassResistance activists up and down the state contacted legislators, urging them to pass these two important bills. Finally, on March 7 and 8, the Idaho House of Representatives held contentious floor votes on these two bills. Many of the talking points used during the floor debate came from MassResistance activists. They provided extensive research for legislators so they could respond to the false and deceitful talking points from the LGBT lobby. 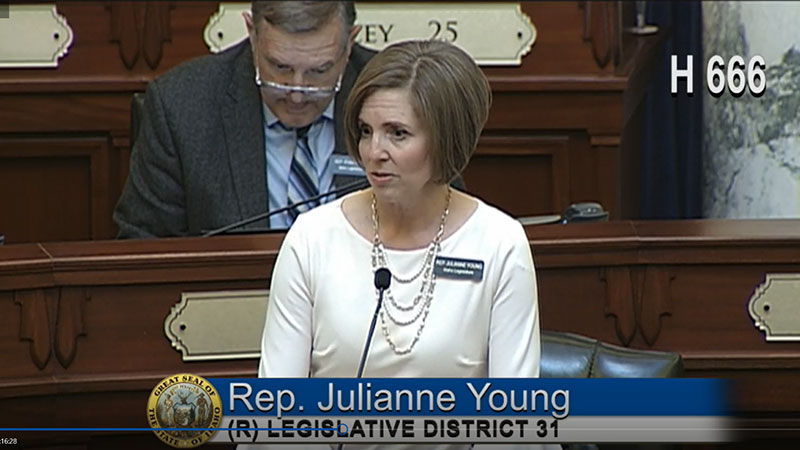 During the floor debate, a sponsor of H666 discusses the unbelievable pornography for children in the file of examples from Idaho libraries.

Both pieces of legislation ultimately passed the House with wide support. Surprisingly enough, the Idaho Speaker of the House, who has a mixed record on these socially conservative reforms, made sure that both bills received a hearing and final passage.

Both bills would need to get through the State Senate State Affairs Committee. The committee chairman, Patti Anne Lodge, though a Republican, is a notorious liberal who has voted against many conservative reforms. This year was her last year serving in the State Legislature, since she had decided to retire. Many lobbyists in Boise were convinced that there was very little they could do to convince her to move either bill forward.

To make matters worse, Idaho State Senate President Chuck Winder, also a Republican, announced in a Zoom call of a local press conference that he did not see any chance of either bill even getting a committee hearing. He actually called the two bills “craziness from the House.”

How did this happen? It appears that the LGBT lobby had saturated the RINO Senate leadership with their false and deceptive talking points.

Our Organization Director, Arthur Schaper, contacted one of the leaders of the State Senate, to ask why H675 (the bill banning “sex-change” procedures on children) was not moving forward. The Senator rattled off LGBT talking points. However, those points were contradicted by the actual text of the bill - which Arthur read to him! That didn’t matter to the Senator at all.

It was similar with bill H666. MassResistance activists worked with Dan Kleinman of SafeLibraries, a group that exposes library corruption and harm to minors. Dan filed FOIA requests with libraries throughout Idaho. He discovered that numerous library staffers had submitted false and misleading talking points to Democrat state legislators – and the GOP Senate leadership. These included statements like: “This legislation amounts to censorship” or “It violates the First Amendment” or “This legislation will criminalize librarians.”

Conservative lawmakers in the House and Senate were very angry. The file of pornographic library books available to children was sickening to many. And the fact that librarians across the state had actively (and dishonestly) lobbied against the bill that would keep pornography away from children infuriated many conservatives even more.

In late March, as the legislative session neared its end, the last item on the Legislature’s plate was the state budget. Conservatives came together on the obscenity issue and continued to push back on this issue against the leadership. If the state-funded libraries insisted on pushing pornography on children, they needed to feel the heat.

During that battle the state budget went through four iterations which failed to pass. 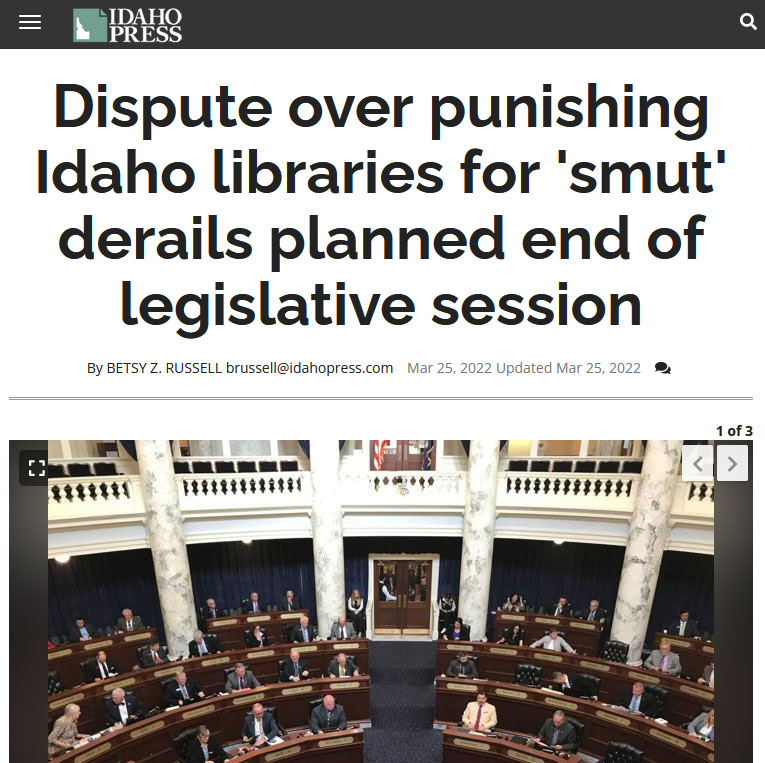 The fifth time, agreement was finally reached. Nearly $4 million was cut from the State Library Commission. (The money had been mostly earmarked for certain construction and remodeling upgrades in various libraries.) This is a substantial cut, and the Left is not happy about it. 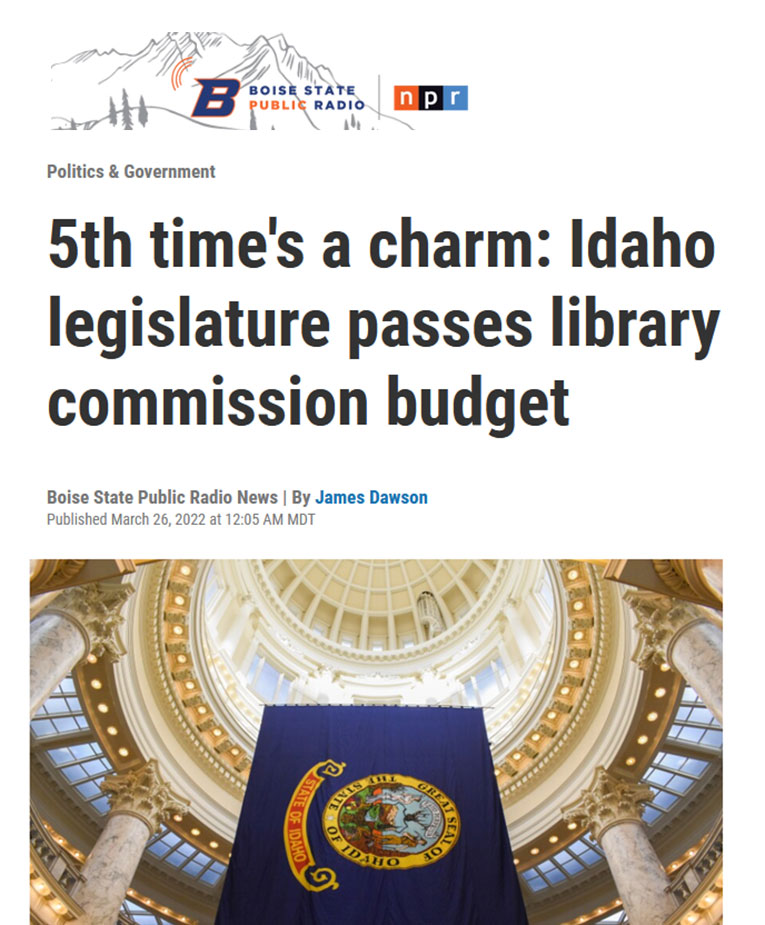 In addition, a resolution was passed creating a special legislative committee to deal with this problem. The group’s official title is “House Working Group for Protecting Idaho Children from Material Harmful to Minors in Libraries.” Its mission is to use all available laws, regulations, and policies to protect children from obscene material in their schools and libraries.

It’s unbelievable that any “normal” lawmakers would allow these terrible policies harming children to stand. But unfortunately, that’s what’s happening.

Families are running into similar problems in many deeply conservative states and regions. Social liberals know they cannot get elected as Democrats, so they run as Republicans. We’ve seen it in Texas, Florida, Wyoming, Idaho, and other places. They cause all kinds of havoc, and often get into leadership positions. They collaborate with the Left, the LGBT movement, Black Lives Matter, Critical Race Theory proponents, and others.

MassResistance is dedicated to helping local activists deal with this in their home states!