American Library Association training video exposes how public libraries collude with the LGBT movement to quash opposition to obscene books for children. Warns about MassResistance organizing successfully to stop them!

ALA trains library officials across the country how to thwart parents & public officials – and how to “handle” the media.

They admit their goal is to “change lives” of children through LGBT propaganda and pornography. 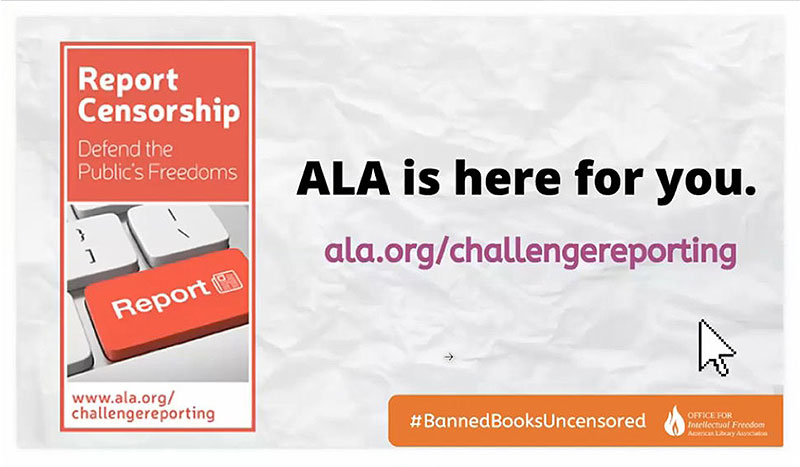 For years the far-left American Library Association (ALA) has been working closely with national LGBT groups to train library officials how to thwart and demonize parents and public officials opposed to the obscene and pornographic books for children and teenagers being placed in public libraries and schools.

Parents have always naïvely assumed there is a level playing field when they “challenge” a terrible book in their public library or school, and that the books had gotten there by mistake. In fact, librarians are purposely pushing these books, and when parents try to complain they come up against a well-oiled machine.

Our friend Dan Kleinman of SafeLibraries uncovered an ALA training video from May 2020 – over two years ago – that lays out the details. It also describes how the ALA considers MassResistance to be a national force in helping parents derail their efforts. The ALA said it’s also actively opposing anti-pornography groups.

The hour-long training webinar was produced by the ALA’s Orwellian “Office for Intellectual Freedom” (OIF) which organizes the defense of child and teenage pornography across the country. The presenters included the president of GLAAD (a leading national LGBT group), the director of OIF, two local library directors, and others.

“A team effort” to change lives

“This is a team effort - we’re all in this together,” they were told. OIF promotes a camaraderie and passion about what they are doing. And “don’t let parents bully you.”  There was a clear animosity and resentment toward the family and traditional religious values.

They recommend to publicly use feel-good slogans such as “libraries are for everyone,” “we need to include the entire communities,” etc. But privately, as one presenter emphasized, the purpose of pushing these books on children is to “change lives.” Librarians need to “accelerate acceptance for the LGBT community” – i.e., to change children’s perception of sex, “gender” issues, and LGBT behaviors.

None of them are concerned about how being exposed to homosexual pornography actually changes – and greatly harms – the lives of children.

A library director in a conservative suburb of Wichita, Kansas talked about how he defeated parents who were challenging transgender books for young children. 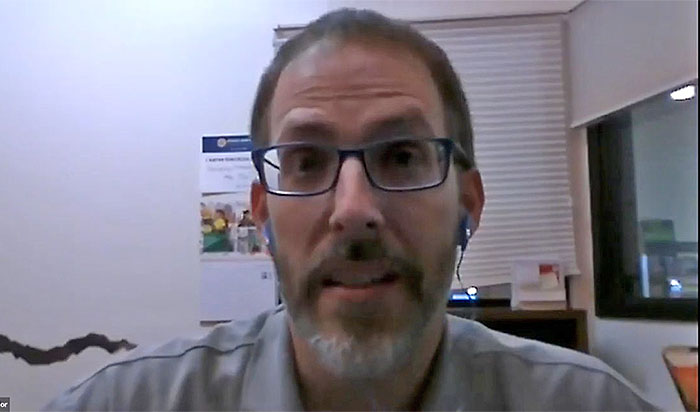 He started by confronting their concerns with stock phrases: “We are buying books for the entire community.” “It’s the parents’ responsibility to determine what’s appropriate for their kids.”  “We’re promoting access to materials so people can make their own decisions, not a particular point of view.”

When the parents asked that the books be moved to the adult section, he told them, “The target audience is children – and that’s where the books belong.”

Eventually the parents wanted to challenge the books for removal. More than anything, he emphasized that the challenge “process” is an important tool for derailing opposition. Basically, this means having an official, written bureaucratic methodology where the parents must fill out “challenge” forms for each book, and then the books are “evaluated” by a committee of library officials. It’s all very orderly and official. But it’s completely rigged, and ultimately, no books are ever removed.

When the parents got upset about this and complained, he said, the library board “wisely” decided to do away with public comment at their meetings.

A library director in Huntington Beach, CA, showed the group how she successfully kept the toxic pornographic LGBT sex book for teenagers, Gender Queer, in the library when a local woman came in upset about it. They were able to take off the woman’s edge by making her admit she didn’t have a library card. 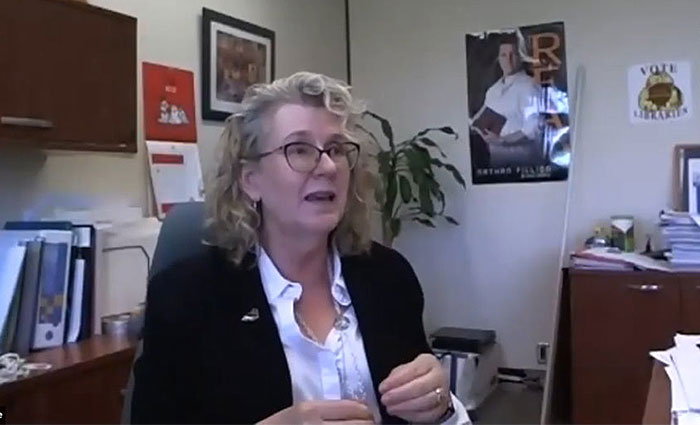 But the key, the library director said, was that they had a strong policy. “We already had in place a policy and a procedure and a form for people to fill out.” The staff was very well trained on how to deal with parents who came in to challenge books. They made the woman go through the entire process. And, of course, the book was ultimately kept on the shelves. “The process is very important,” the library director repeated.

The library also monitored the local social media to see what the woman was saying to others in the community, and reported everything to the ALA’s Office for Intellectual Freedom.

The library director’s message: The parents are the ones with an agenda. They are targeting the library. None of this is the fault of the library staffers.

Warning about parent groups – including MassResistance

It’s one thing to deal with individual parents or ad-hoc local groups that are easy to defeat. But when they get help from experienced conservative groups that know how to fight back with strong arguments and tactics, that’s when the ALA gets worried. 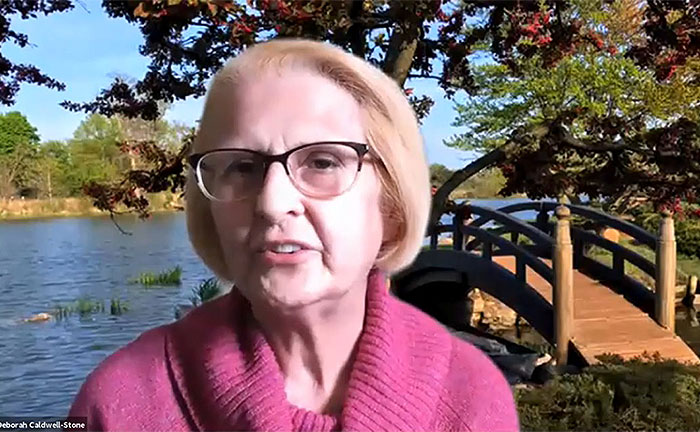 Director of ALA's Office for Intellectual Freedom, who is also an attorney.

The Office for Intellectual Freedom director warned the viewers:

Some of these false narratives that are introduced about these books are being brought in by outsiders or people trying to corrupt children, particularly by advocacy groups like MassResistance who has been very successful recently in trying to establish local chapters, by the way, to influence not only state legislation but library policy, you need to challenge it right away. And GLAAD can help you with that.

She also said that the ALA is tracking “anti-porn” groups which have gotten involved. They don’t want any public connection made with pornography.

The president of GLAAD said that when library officials are dealing with organized opposition in the community from parents objecting to the books, they should feel free to call GLAAD for help. GLAAD will get involved. 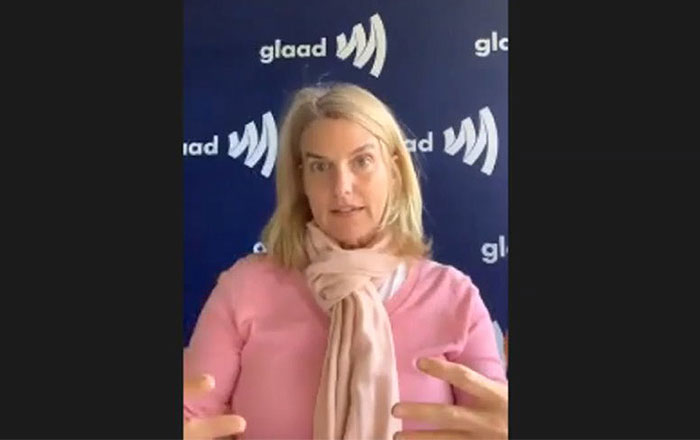 “This is what we deal with. We build out a campaign to help drown that out,” she said. GLAAD is especially good at getting pieces published in the media to punch back. “We can help be your defense – and your offense.”

She explained that these parents are “a handful of very vocal people.” But they are attacking libraries. They are extremists, against freedom to read. And the community needs to be informed that the majority of people support these LGBT books and this agenda.

Dealing with the media properly is important, she explained. GLAAD gives specialized media training to library officials. One of her tactics is to get local homosexuals and transgenders to “humanize” these books by comparing them to their personal stories.

In particular, she said, “Don’t let journalists include both sides of the story.” They should only include the side of the “marginalized communities.” That doesn’t just apply to the media. She also warned that public libraries should never give in to showing both sides of the LGBT issue in their programs or displays, etc. There is only one side that must be represented.

She also coaches on how to deal with parents who organize opposition against the local library boards. Among other tips for library officials: “Use local LGBTQ centers in your town. They can help.”

The ALA’s Office for Intellectual Freedom is also working in various state legislatures to derail bills that would establish “parental oversight boards” and other pro-parent legislation. The OIF director said that they “monitor” pro-family groups around the country to see what bills they might be helping introduce. And they form “strong coalitions” with other leftist groups and their lobbyists to stop pro-family efforts in state legislatures.

The ALA’s sustained message to legislators is that “libraries are essential and necessary for the education of the community” and that pro-family parents are “attacking” libraries. They also develop specialized “messaging” to sway middle-of-the-road (and conservative) legislators.

They work diligently to “reframe” the issue from the fact that these materials are sexually inappropriate for minors, she said. Instead, promote them to legislators as “diverse materials” that are about “inclusion, fairness, and protection” and “everybody’s right to see themselves and their families reflected in the books in the public library.” “Everyone is a taxpayer.”

(Note: Dan Kleinman has submitted a formal ethics complaint about the ALA efforts to re-frame pornography as “diverse materials.”)

Report everything to the ALA!

At the end, everyone was told to report everything to the ALA’s Office for Intellectual Freedom. The OIF office will track it and help get libraries the resources to fight the parents, officials, media, or anyone else who’s getting in the way. 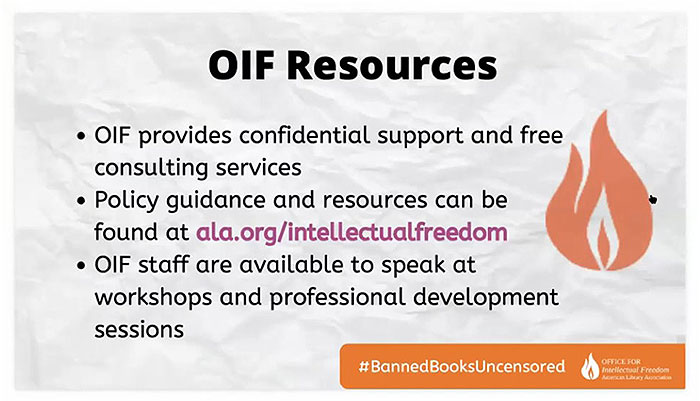 The ALA's Orwellian Office for Intellectual Freedom gives resources and support to libraries across America to confront parents.

One of the biggest problems we face is that the average person cannot imagine that this is really happening in their libraries and schools. Normal people would be sickened at the idea of making pornography available to innocent and vulnerable children. But over the years, libraries across the country have attracted people whose character is so debased that they not only do it, but are even sadistic about keeping distraught parents from knowing about it or doing anything to curtail it.

Their well-tuned systematic methods to deceive and demonize parents and conservative public officials is very difficult for the average person to overcome.

But as they are forced to admit, MassResistance – which has been in this battle for decades – has been effective in helping parents across the country derail their freight train of horror. And as our activists successfully did recently in Wyoming, a good first step is to demand that the library cut ties with the American Library Association.