Dozens of police from surrounding towns brought in to "protect" library 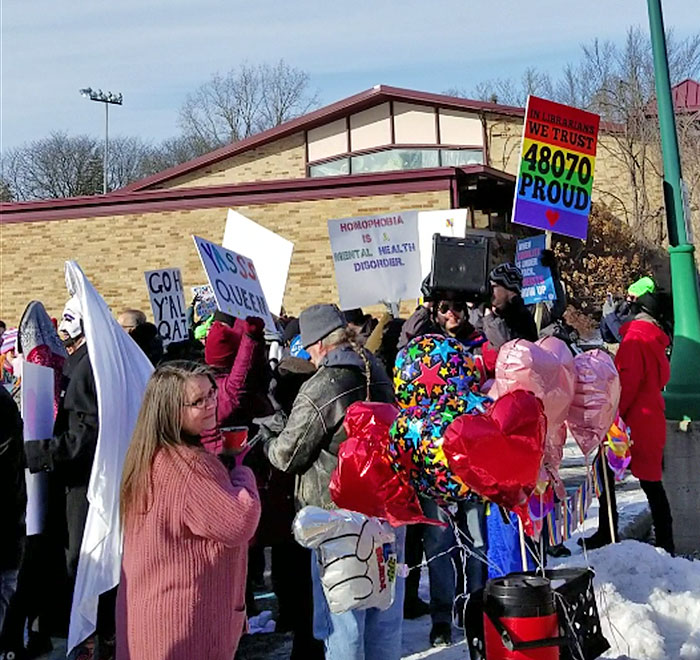 The noise from the LGBT mob was deafening. Note the bizarre costumes (left) and the signs such as "Homophobia is a mental health disorder" (center).

A little activism sure goes a long way! This is what MassResistance caused by simply speaking out in a liberal community.

On Jan. 26, nearly 300 screaming LGBT activists converged in a “free speech zone” near the Huntington Woods, Mich., public library. Their sole purpose was to intimidate and harass pro-family citizens who were protesting the library’s Drag Queen Story Hour event. The pro-family people were corralled into an adjoining “free speech zone,” also created by the city officials. 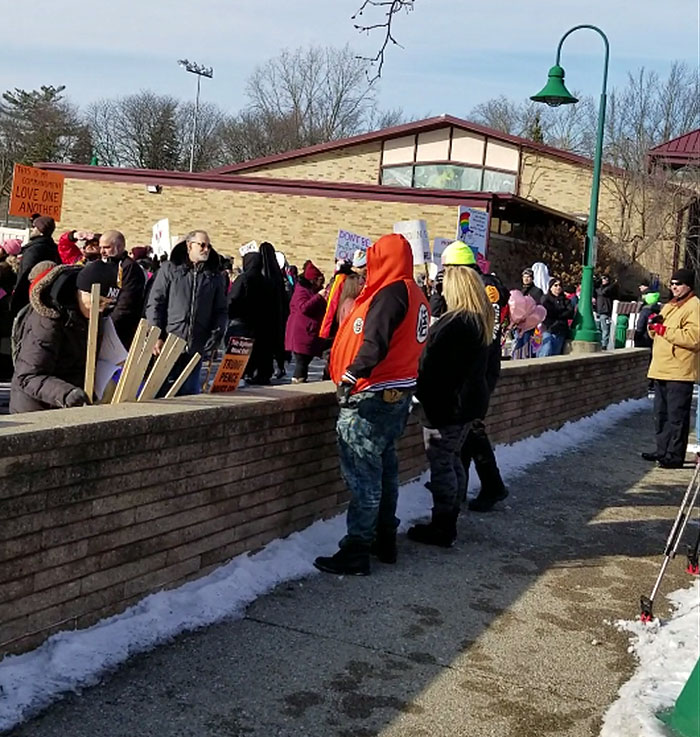 A low wall divided the "free speech zones" set up for the LGBT mob (a parking lot, left) and the pro-family people (a sidewalk, right).

Approximately 40 police, mostly from nearby communities, came to “protect” the library and the event attendees, and enforced the “free speech zones” – which included blockading sidewalks and streets.

While hundreds were protesting in the "free speech zones" the police made sure that none of them could come near the library itself.

Our pro-family protest was actually only a small handful of people. This included a group of Warriors of Christ activists who came from Tennessee to join in. That’s all we needed. The stark contrast of numbers exposed how absurd the hysteria generated by the city and their LGBT allies was.

Before protesting, local pro-family people gathered in a circle to pray. 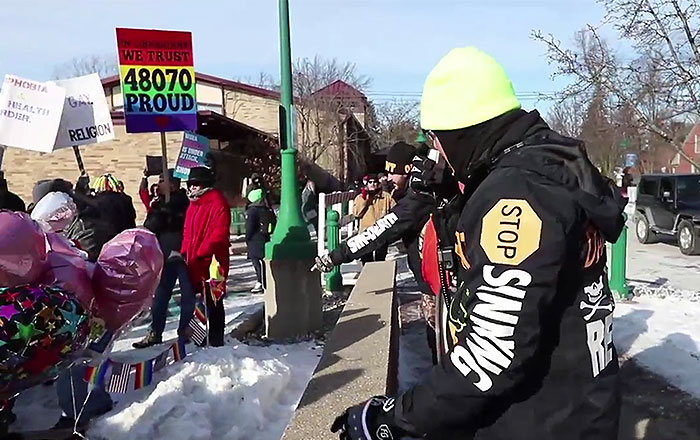 A Warriors of Christ protester (right) tries to engage the other side.

It appeared that almost all of the LGBT activists, as well as the Drag Queen Story Hour attendees, came in from out of town. They were obviously in collaboration with library officials.

A sudden uproar - after a year of silence

For over a year, the Huntington Woods public library held regular “Drag Queen Storytime” events. These programs featured homosexual men in flamboyant women’s clothes – and often scary makeup – all of it targeting young children. They say they are helping young children become “literate” and “inclusive.” But in fact the stated purpose is to get children to feel comfortable with LGBT behavior at an early age. 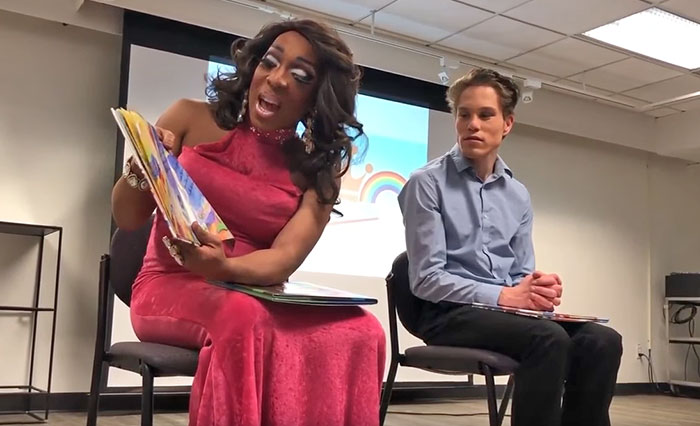 On Jan. 26 while the protests were going on outside, this was the scene inside the Huntington Woods library.

Many people in the town strongly objected to this event being held in their library, but they felt afraid to do or say anything. Judging by the uproar outside the library, it’s understandable they felt that way.

Then suddenly in Dec., 2018, MassResistance got involved. Local pro-family people had had enough. As we reported, MassResistance activists flooded the city officials with calls and emails. This soon was reported in the media, and resulted in a riotous City Commission meeting on Dec. 18, where over 200 LGBT activists (mostly from outside the city) came to “defend” the Drag Queen event – even though it wasn’t on the meeting’s agenda.

After that, when MassResistance announced there would be protests at the next Drag Queen Story Hour, scheduled for Jan. 26, the city – and the Detroit area LGBT community – went into a frenzy that just seemed to have escalated over time.

A true spectacle outside the library

What took place that day was truly a spectacle. Here are four observations from that: 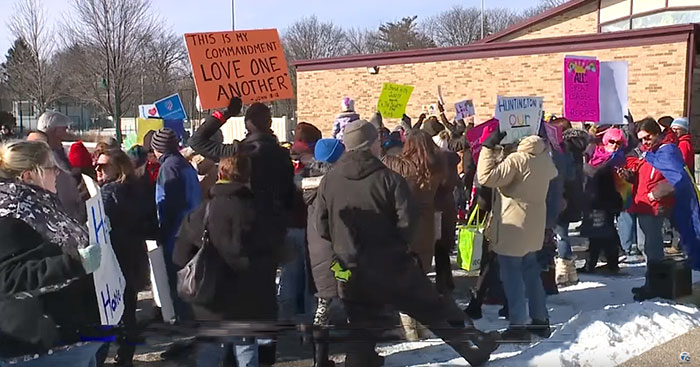 It was quite cold that day, but the LGBT activists were willing to stand out there quite a while, chanting and screaming, to send a message to anyone who dares to publicly disagree. But our people refused to be intimidated!

First, the concept of government-demarcated “free speech zones,” which is naturally offensive, has had a rocky history in the courts. It began on college campuses and then moved on to political conventions. This is the second time we’ve seen a library use it to simply keep protesters away from their unsavory activities, and allow LGBT hooligans to harass pro-family people.

The LGBT movement's obsession with young children is nothing short of chilling. Hundreds of adults came to this Detroit suburb to stand outside on a cold winter day. They came to hysterically defend a library event whose stated goal has nothing to do with reading, but with making small children comfortable with homosexuality and transgenderism.

One person told us afterwards that the artificial noise and screaming from the LGBT contingent made it so incredibly loud that he could hardly think. (That is what fascist disrupters want: to frighten and silence the opposition.)

Their constant theme, both directly and indirectly, was that they are “loving and tolerant” and those who disagree with them are “haters.” 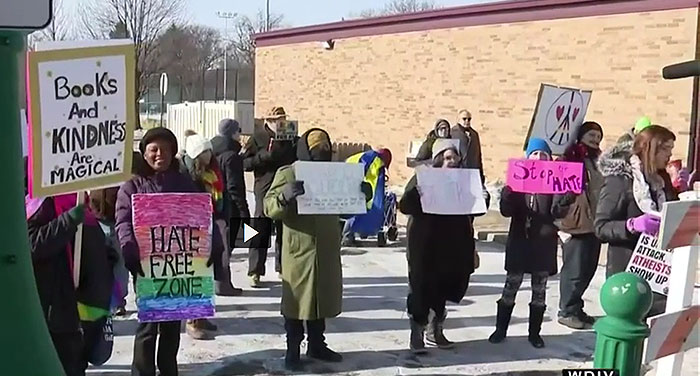 The police were quite friendly to our side, and it seemed that they personally sympathized with and agreed with us.

We have continued to be contacted Huntington Woods residents, thanking us for doing what we did! They all realize that they are up against a frightening irrational fascist-like force that sadly includes many of their own unthinking friends and neighbors. Without MassResistance, there would be no hope at all, we’ve been told.

What does all this mean?

In many ways this was a good outcome. The city and their vast LGBT allies expended enormous energy – not to mention a lot of money – basically defending the indefensible. It exposes their despotic tactics.

And the word has gotten out through that part of Michigan (mostly through the mainstream media) that there is organized resistance to this insanity. We may not have stopped this yet – but we’re certainly moving forward!