After derailing transgender “diversity week,” she takes on the school board and wins

Also stands up to LGBT activists out to intimidate parents 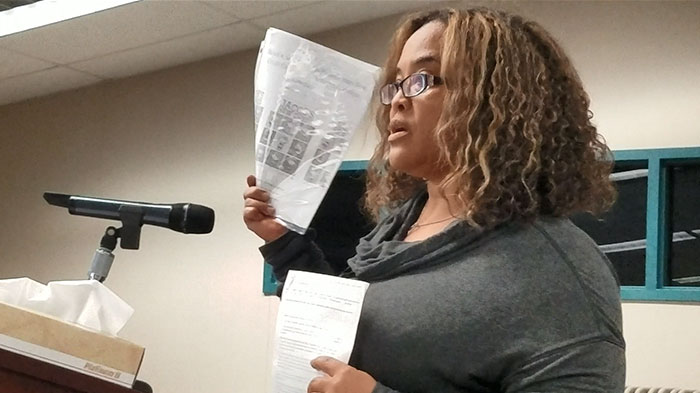 Not standing for it: Shanda holds up documentation about the children's LGBT book "Jacob's New Dress" as she berates the school board on Nov. 14, 2018.

When parents are willing to fight back – and organize others to help – they can make a huge difference! This is what MassResistance is promoting around the country.

In Part 1, we reported how Shanda, a mother with children at the Betsy Ross Elementary School in the Anaheim (CA) Elementary School District, successfully stopped a week of radical “transgender” indoctrination planned at the school. (It was blandly titled “Diversity Week,” but that didn’t fool Shanda, who is a trained social worker and understands that kind of deception.)

But there were more successes after that. Shanda forced the school library to pull back their “gay” propaganda, stood up to an LGBT mob out to intimidate parents at a school committee meeting, and even helped cause a pro-LGBT school board member not to run for re-election!

After the “Diversity Week” success, Shanda didn’t stop. She filed a series of FOIA (Freedom of Information Act) requests with the school district. She wanted to find out the extent of the collusion between the school and various LGBT organizations in putting “Diversity Week” together, and exactly what they were planning.

The school administrators had claimed that their programs were not focusing on transgenderism – and were not coming from national LGBT organizations such as the Human Rights Campaign's “Welcoming Schools” from and GLSEN’s programs, both targeting schoolchildren across the country. But Shanda didn’t believe that and already had considerable evidence to the contrary.

She received back a pile of material from the FOIA requests. Most of it was (purposefully, we believe) not relevant or duplicates and triplicates of the same thing. But it also included some very revealing memos and other material:

This showed that the planning behind “Diversity Week” was even more devious and dangerous than Shanda had realized. 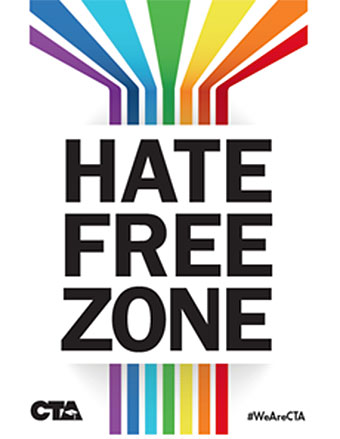 This book by the California teachers' union is for elementary school children. It portrays parents' values critical of the LGBT agenda as "hateful."

Confronting the school board at their monthly meetings

Shanda and her fellow MassResistance parents and activists began confronting the Anaheim Elementary District School Board. Over the previous several months, Shanda had spread the word, with things like this simple but very informative PowerPoint presentation.

On Sept. 24, 2018, Shanda, along with MassResistance activists including Arthur Shaper (our Organization Director), attended the school board meeting. Shanda and the others were very direct and unflinching during the public comments to the school board members. They testified about what they had uncovered in the FOIA requests and the outrageous direction of the LGBT agenda in the elementary school. The board members were not pleased, and tried to stifle the parents’ comments by limiting their time. The parents made it clear that this wasn’t the last the board would hear from them.

LGBT activists come to intimidate parents at school board meeting

At the October 24, 2018 school board meeting, Shanda brought even more people along with Arthur Schaper. But this time, the board had set things up to thwart them.

A group of LGBT activists were there to confront and intimidate the parents. The group was led by Laura Kanter, of the LGBT Center of Orange County, who had helped the Betsy Ross Elementary School administrators put together the transgender programs that Shanda derailed back in May. Kanter and her friends were clearly still angry at those parents! 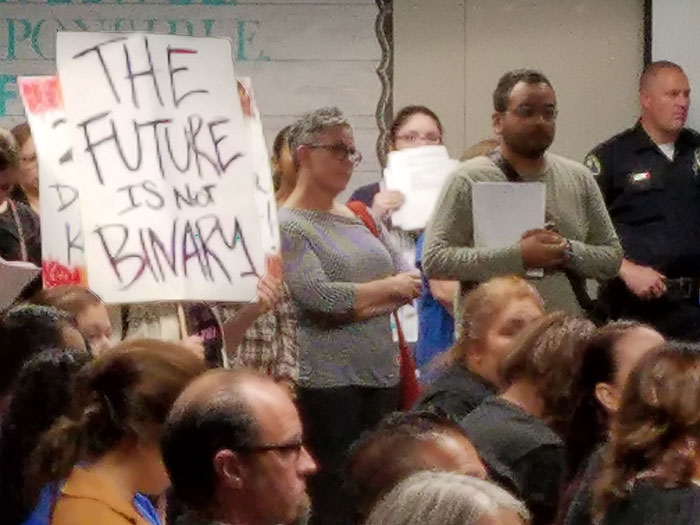 The harassment started before the meeting began. Arthur and others were passing out flyers (in English and also in Spanish) to attendees informing them what had been happening in the school district. One of the LGBT activists grabbed and held Arthur’s arm, and yelled at him about being a “hater.” Arthur threatened to call the police and kept handing out the flyers. 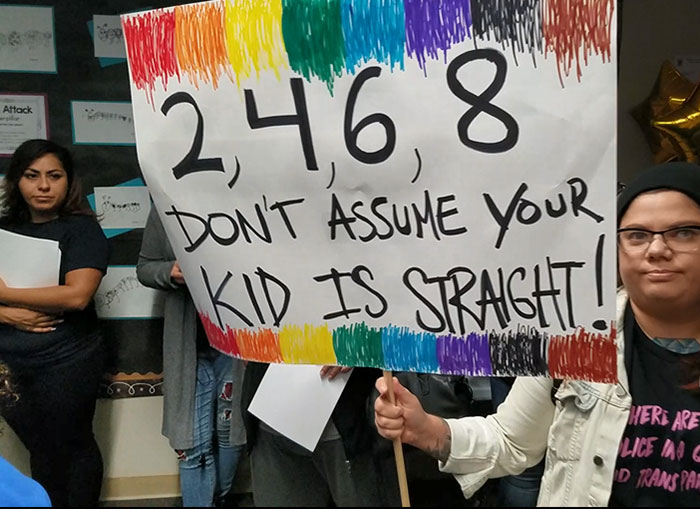 More intimidation of parents from LGBT activists at the school board meeting.

As Shanda relates, this kind of bullying and intimidation has escalated since the parents have started fighting back. But it’s not working, she said! 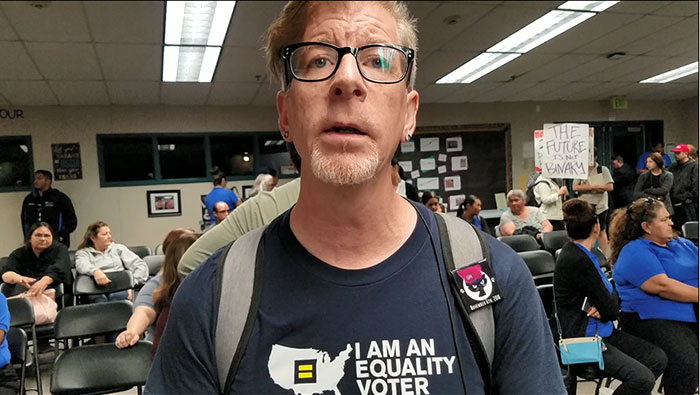 This man jumped up and began harassing Arthur Schaper. But like the other MassResistance people, Arthur refused to be intimidated.

There were also three Anaheim police officers present. Shanda had never seen police at a school board meeting before. This seemed like a way to intimidate the parents. 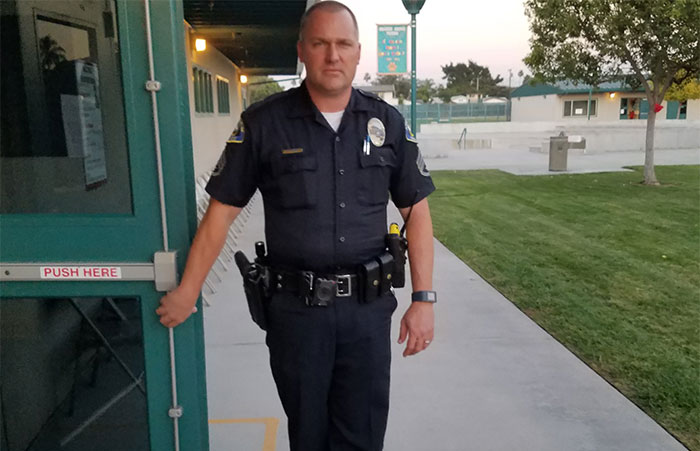 More intimidation by the school committee. As parents entered the building, they were "greeted" by a police officer.

School employees were also part of the intimidation effort. Several came prominently wearing their “Safe Zone” tags on their shirts or suits. 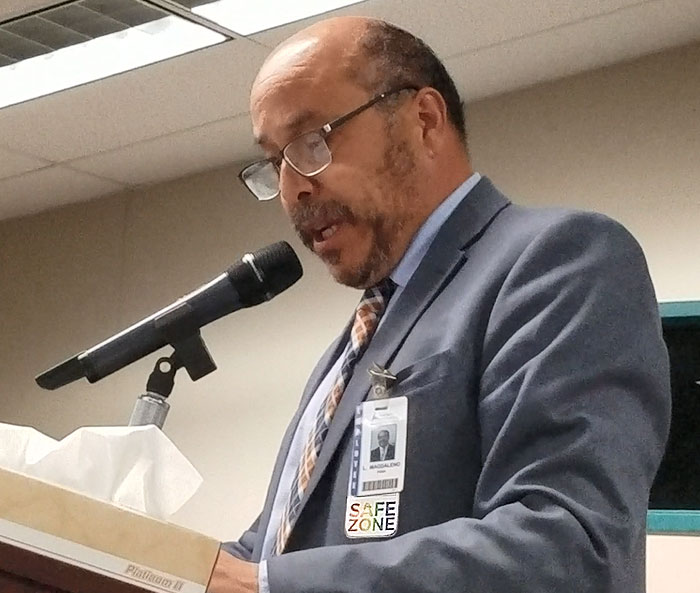 Most of the school staff that night were wearing "Safe Zone" tags on their badges. More intimidation directed at the parents.

During the public comment period, the LGBT message was a blatantly radical defense of their program. A woman who called herself a nurse said there is nothing wrong with permitting children to undergo surgery and hormone therapy to “change their sex.” Laura Kanter talked about implementing a strong LGBT curriculum in the elementary schools to make the district a “safe space” for all children. 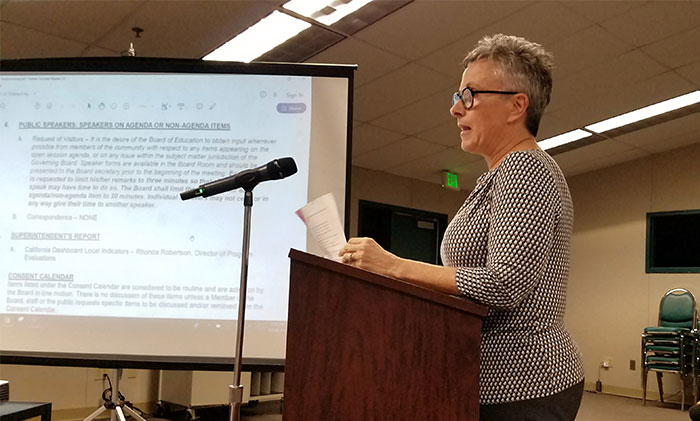 Disinformation: LGBT activist Laura Kanter told the board that 6.4% of the county's students - over 15,000 - are gay, lesbian, or transgender. This absurd number came from "surveys" that were analyzed by the local ACLU! Furthermore, these children must be "supported and mentored" in their behaviors by the school district. The parents strongly dispute all of this - including the idea that a child can be legitimately labeled as LGBT.

When Shanda and the others got their turns to address the board, they hit back hard. They blasted the LGBT/sex-ed push in the elementary schools. They described the depravities of Kinsey, whose deeply flawed theories started much of this radical sexuality inclusion in public education. They berated the board for all the secrecy, and for not giving parents a choice in the matter.

Shanda also aimed her wrath at Heywood for inviting the LGBT group to come to the meeting. That kind of anti-parent move by an elected official is abhorrent. 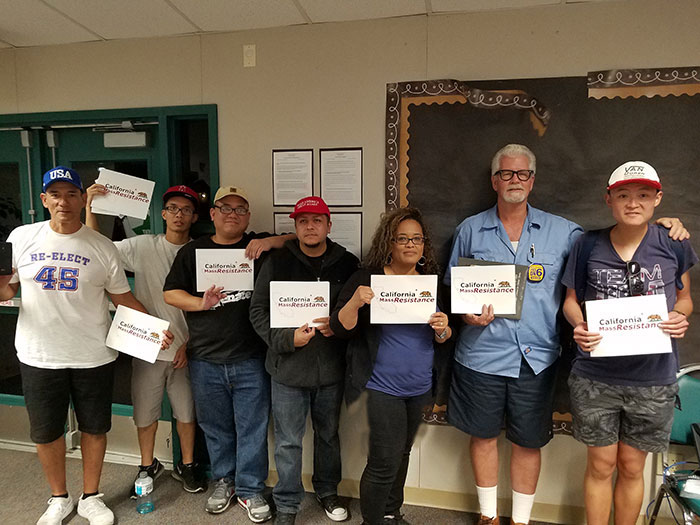 The confrontation continued outside the building after the meeting. This time, several of the MassResistance group decided to engage Laura Kanter and the others about why they came to intimidate and harass – and they were pushing their radical ideas on young children. The LGBT activists scurried away!

Success at the November school board meeting

The following month, at the Nov. 14, 2018 school board meeting, the MassResistance parents came back again – to achieve some significant successes!

First of all, the LGBT activists did not attend the meeting. Despite their best efforts to intimidate the parents, the LGBT group essentially had found themselves having to defend the indefensible: teaching elementary school children about horrible, unhealthy behaviors. They apparently didn’t want another round of that.

When the parents testified, they continued their confrontation with the school board. They railed against the plan to push LGBT agenda on the whole district – using the excuse that the schools need to accommodate two children whose parents claim they’re "transgender” (but who actually need mental health help). 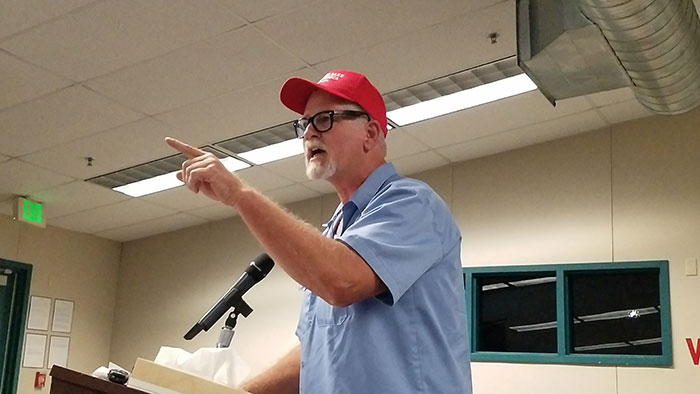 Railing against the radical transgender agenda being pushed at young children by the school board.

Shanda reminded the board – again – that most of this LGBT push follows a false mandate: the schools are relying on a bill that was vetoed by the governor and did not become law. She also continued to berate Heywood for bringing in the outside LGBT group to intimidate the parents the previous month. Thanks to Shanda, that was becoming a topic of outrage among many parents in the community. All of this was clearly making the board uncomfortable. 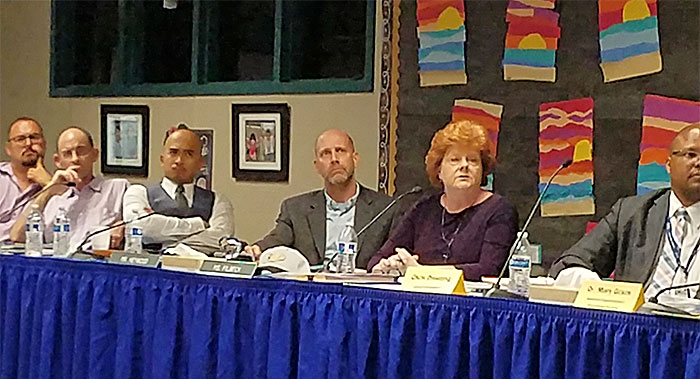 The school board members were clearly not enjoying it as the parents were addressing them. Council member D. R. Heywood, who later announced he was not running for re-election, is seated at the center, in green coat.

Then came some pleasant surprises:

And the momentum continued. The day after the November board meeting, Shanda’s daughter reported that all the pro-LGBT decorations had suddenly been removed from the elementary school library.

Shanda and her group are really impressive. All of this shows that nothing is impossible! When parents work with MassResistance and take a principled, relentless, no-compromise – and fearless – approach, great things can happen.

The other side depends on disinformation, confusion, and intimidation by school officials, along with bullying and harassment from the LGBT movement and their allies. We make sure that parents are informed about what’s really happening, are armed with the truth, and are willing to confront anybody who gets in their way! That’s what freedom is all about. We all need to do it!