Derailing the “Drag Queen Story Hour”: How the Houston City Council and library officials finally caved in to MassResistance parents

… And what comes next

Pounding them with the horrors and corruption surrounding this depraved event

This is how real pro-family activism works!

The pro-LGBT city officials of deep blue Houston, Texas had no intention of hindering the monthly “Drag Queen Story Hour” events in the city’s public library, despite outcry from various pro-family groups.

But starting back in November, Houston MassResistance jumped into the fight. It included pressure on the Houston City Council (Part 1 of this series), along with a full-court press on the Houston Public Library administration (Part 2). By the end of January, it started to look like the city’s resolve was weakening.

On Feb. 19, Houston MassResistance parents came back to the Houston City Council meeting. This time, during the public comments section it was an even bigger confrontation.

The city council allowed the parents only about 70 seconds each to speak. But they gave some of the most powerful 70-second speeches we’ve ever heard! (See video above. An example from one man: The Drag Queen Story Hours are “mind-raping our children.”) Politicians are rarely publicly confronted so directly by parents over the LGBT agenda targeting children. 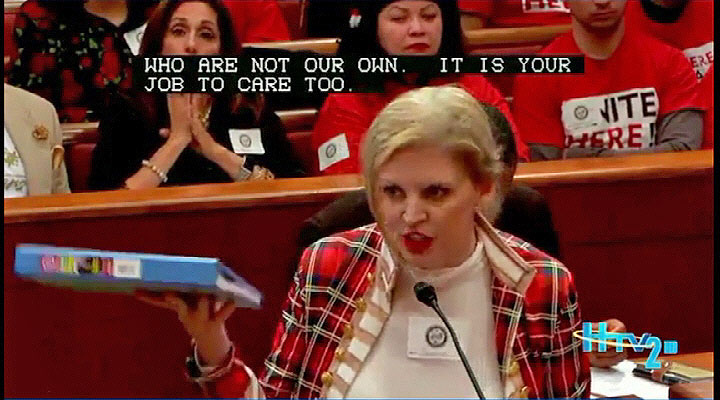 Tracy presents the Drag Queen Story Time Exposé (in blue binder) to the city council during her testimony. Each member also received an electronic version.

A few of the Houston MassResistance mothers held up samples of the pornographic photos included in the report as they testified. They wanted to make sure that everyone saw what was really going on with this “children’s reading event.” 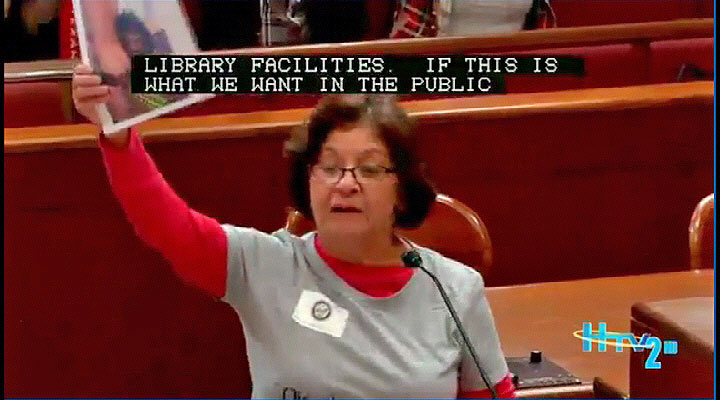 During her testimony, Linda held up this photo from the exposé for the city council to see. It's one of the Drag Queens rubbing another man's bare buttocks.

This Houston MassResistance mother held up two photos from the report of children who are being horribly exploited by the "Drag Queen" movement. One of the photos (at left) is posted below.

They didn’t hold anything back. One of the speakers testifying in the video above referred to the Drag Queens carrying rubber chickens around with them. That is a “gay” code word for pederasty. “Chickens” in “gay” slang refers to under-age boys that older gay men find and seduce. How much clearer a message do parents need?

Outside the Houston Public Library just before a "Drag Queen Story Time" event, one of the drag queens holds up the rubber chicken he's carrying around, as the others appear to be amused by it.

The Drag Queen Story Time Exposé is quite a powerful and thorough work. It includes 18 exhibits that cover a wide range of serious problems and outright corruption connected with the event, starting with the library staff’s blatant violations of their own rules of policies, violations of the American Library Association’s policies, and violations of applicable law. 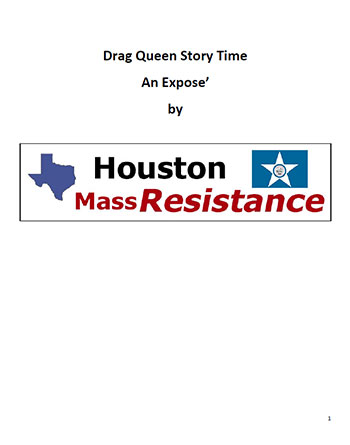 It also documents that a library official is the mother of one of the people in the “Drag Queen” group – and is essentially promoting the group’s “Drag Queen” business by bringing them into the library to perform.

Several of the exhibits expose the perverted and very disturbing behaviors of some of the “Drag Queens” – much of it pornographic, including depraved activity such as sado-masochism – revealed through their social media posts and advertising. (The Drag Queens’ stage names were used in the library’s promostions for the Story Hours.)

It’s particularly disturbing that some of the Drag Queens are connected with “gay youth” organizations. One Queen who read to the children, ReginaBlakeDuBois (“Miss Gay Texas America”), is linked to the Houston LGBTQ Montrose Center which hosts “youth” support groups, one for ages 6-12, and one for ages 13-20.

Such LGBT “support groups” are found across the country and are notorious for bringing young teenagers (and even younger children) into unsupervised contact with LGBT adults, where kids are told “It’s OK to be gay or transgender.” This plays right into parents’ fears regarding the true nature of “Drag Queen Story Hour” events in the library. 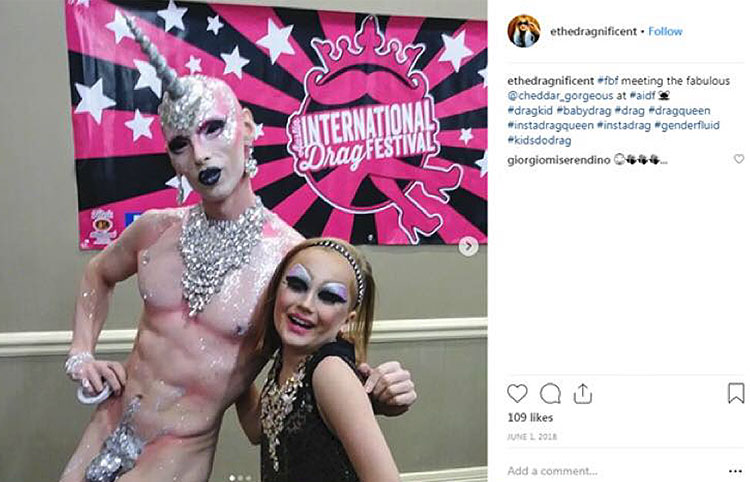 Part of the Texas "Drag Queen" scene. This is a 9-year-old boy ("#dragkid") who was lured into that sickening lifestyle. He's now being displayed on social media in front of an "International Drag Festival" banner.

Finally, the report includes a collection of the children’s books to be read to kids, from the “Drag Queen Story Hour” website. These books, aimed at children as young as toddlers, are truly frightening in the way they are designed to normalize LGBT behaviors in their young minds.

The exposé makes crystal clear the real interests of these Drag Queens. They don’t really care about “promoting literacy” in Houston. Rather, they are obsessed with homosexual sex, involving the most degraded and dangerous behaviors. How are these men “role models” for children?

A big win – the city and library cave in!

Soon after the Houston MassResistance parents testified and presented the document, they were told that the city authorities had decided to stop having the “Drag Queen Story Hour” at the public library. The Houston Parents had definitely won a big victory! For these Houston pro-LGBT public officials to concede to this is quite stunning.

Event is moved to a nearby “gay” church

Unfortunately, the event itself was not being discontinued. It was being moved to a nearby “gay” church. The very next scheduled “Drag Queen Story Hour,” set for February 23, would be held there.

Thus, the city officials were now saying that since it’s no longer being held on public property, but at a private venue, the city no longer has responsibility for it. But that’s not exactly true, said the Houston MassResistance parents. We’re glad that it’s no longer in the library. But the library was still promoting it, organizing it, and advertising it on its website, the parents said, so they’re not completely walking away from this.

So on February 23, a few Houston MassResistance parents showed up outside the church before the event. It was a very weird and creepy scene. Their true colors were on full display. The Drag Queens were able to act out pretty freely. And the hate against their opposition (i.e., parents) was also unrestrained. But only people with tickets were allowed inside. 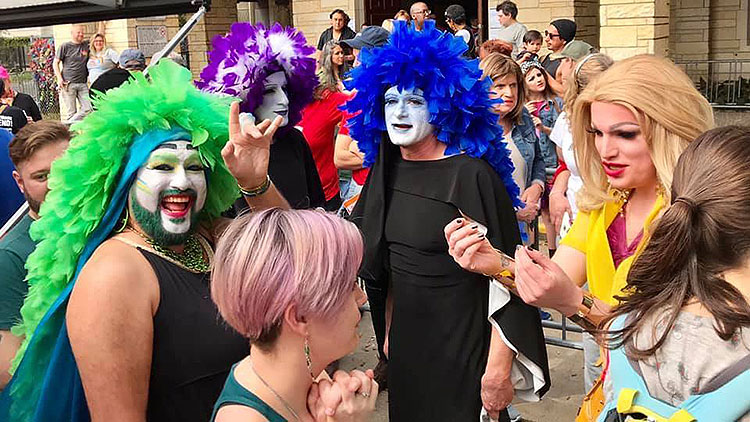 Part of the scene outside of the "gay" church on Feb. 23 before the "Drag Queen Story Time" event was to begin.

As usual, they cannot defend or justify their perverse activities, so they resort to their child-like namecalling.

And yes, we did spot at least one public library official there helping set things up. 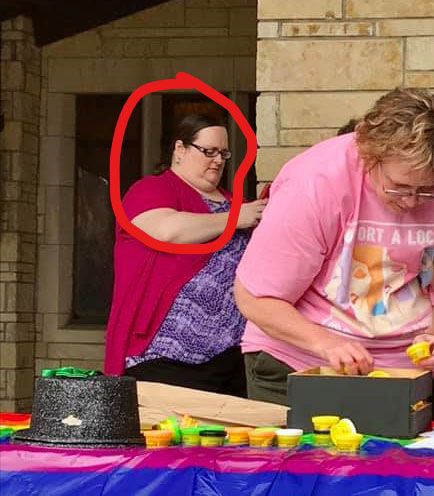 One of the Houston Public Library assistant directors was spotted outside helping get things ready for the Drag Queen event. We're quite sure there were other library staffers inside.

Given the forces we were up against, this is a big victory. These outstanding activists are role models for pro-family people everywhere!

But it’s not over. The Houston MassResistance team still want answers from city officials to numerous issues brought up in the Drag Queen Story Time Exposé document. If the library was violating rules and policies or breaking laws, this must be resolved – and not happen again.

And we’re waiting to see the extent of the city’s continuing involvement in the Drag Queen Story Hour events now that they’re not in the library anymore. And what else is on the horizon?

What else is on the horizon?

Concerned citizens around the country can make use of the exposé by our Houston group to stop events in their locale!

And there must be a national outcry against the American Library Association’s promotion of these events around the country! See more on the ALA’s advocacy here and the ALA’s recommended books for DQSH here.
We’ll keep you informed!