Houston MassResistance “Drag Queen Story Hour” exposé goes international! Reported in media across the US – to the UK and Russia! Tweeted by Governor of Texas.

A registered child sex offender was reading to children in public library – sadly not surprising.

Coverage reveals pent up outrage across the country over powerlessness to stop the LGBT agenda targeting children.

MassResistance is waking people up across the country and around the world!

On Friday afternoon, March 15, our Houston MassResistance parents held an explosive press conference outside of the Houston Public Library. They revealed their chilling discovery that one of the library’s “Drag Queen Story Hour” cross-dressers – who has been reading books to young children at library events – is a registered child sex offender. He was convicted for sexually assaulting an eight-year-old child. Citizens across Houston are shocked and outraged, and city officials have been forced to apologize to the public. 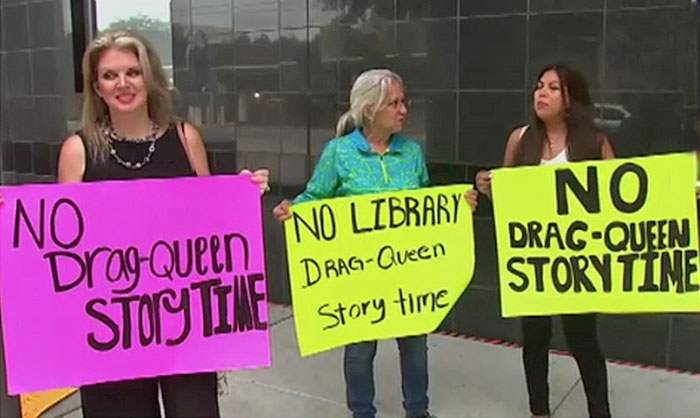 Unafraid to face down the Left!

Taking the media by storm!

Within 48 hours of the March 15 press conference, the shocking story was being reported in media internationally – across the US, in the UK, and even in Russian media! And there are more interviews with our Houston MassResistance activists and articles happening now. 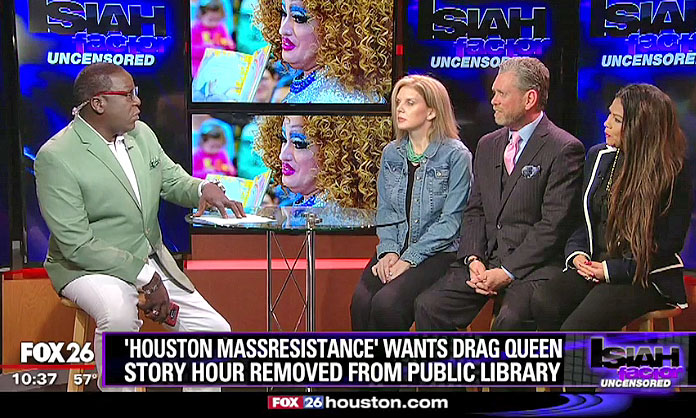 This has definitely gotten the media’s attention. (Note: All of these articles and interviews mention MassResistance!):

The Governor of Texas and a major candidate for Mayor of Houston weigh in!

What happened? Houston MassResistance burst the bubble on the lies and intimidation!

There’s a big reason that this exposé has inflamed so many people. Parents and others have long felt powerless as the LGBT movement has arrogantly bulldozed their agenda into the lives of younger and younger children. The “Drag Queen Story Hour” events in public libraries is just the latest iteration of that. LGBT activists and their allies keep it going by angrily attacking any criticism by saying this is about “literacy” or “inclusion” or “anti-bullying” – and smear parents as being backward, hateful bigots. Houston MassResistance has burst the bubble on that line of lies and nonsense – and exposed this for what it really is.

This didn’t happen by accident. As the LifeSiteNews article describes, MassResistance is virtually the only major pro-family group in America – or worldwide – that takes these “culture war” battles seriously, and actually confronts those who are behind it. We don’t just write depressing articles and occasionally protest.

Of course, the people who aren’t shocked and outraged by this revelation are the LGBT activists. They’ve always known what goes on behind their veneer of respectability. They’re only upset that it’s being exposed to such a wide audience.

As jarring as this news is, there’s more to come, says Tracy Shannon, co-leader of Houston MassResistance. She and her team have come up with at least 500 more pages of material about the library’s “Drag Queen Story Time” events, she told us, much of it quite graphic. There is also documentation of how the city and public officials continue to break their own rules. The Texas Attorney General has even gotten involved to help Houston MassResistance pursue their Freedom of Information Act request for more documents.

Parents are fighting back! We will continue to keep you up to date on this.