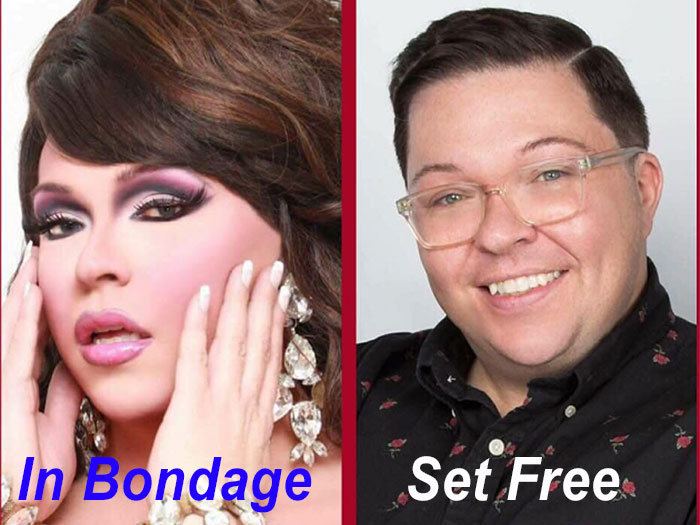 Texas MassResistance Assistant State Director Kevin Whitt - who lived the homosexual / transgender lifestyle for 22 years - is now a great pro-family activist. He knows how bad the "gay" and "trans" lifestyle is!

Our Texas MassResistance chapter, led by Tracy Shannon, has become a powerful pro-family force in in that state. They have forced cities across the state to abandon plans for “Drag Queen Story Hours.” They have exposed the unbelievable depravity in the Austin school system. And they have become a voice in state politics, demanding that the RINO-leaning Texas Republican Party (which controls the State Legislature) support pro-family legislation and oppose anti-family legislation.

Kevin Whitt, the Assistant Director of Texas MassResistance, has become a big part of that fight. Kevin is a remarkable man. He is a former Drag Queen who lived the homosexual and transsexual lifestyle for over 22 years. Kevin has shared his testimony of change throughout Texas and the country this past year.

Kevin has testified in the Texas Legislature against horrible anti-therapy bills – bills that would ban talk therapy for people who have been sexually molested and as a result have unwanted homosexual or transgender feelings. These cruel bills are being pushed with a fog of lies by the LGBT lobby across the country. Kevin has also organized protests against Drag Queen Story Hour events and stood up against the shut-down of businesses in Texas.

When Kevin started protesting Drag Queen Story Hour in Dallas, Texas he got the attention of Antifa, the violent hate group which is closely connected to the LGBT movement. That is when the doxing (publicizing personal information, address, etc.), harassment, phone calls to his workplace, and bad reviews online began.

Kevin works as a hairdresser. He is employed at Shelley Luther’s salon in Dallas, which gained nationwide attention for opening prior to the statewide reopen decree. Kevin’s clientele has diminished significantly since the Left targeted him. Some of his clients left because of the vicious social media attacks. Others stopped going to him when they were told he was not a liberal homosexual hairdresser, but a straight conservative.

Even though he can still go to work at the salon, Kevin now has virtually no income, and continues to be harassed daily.

Kevin represents a threat to the LGBT movement

Because he was part of the homosexual “community” for many years, Kevin’s vocal pro-family activism tremendously enrages the Left. The success of LGBT advocacy rests on people believing they are all “born that way” and can’t change.  Kevin’s story shatters that false narrative. The Leftists want the world to believe that people like Kevin don’t exist. But Kevin is real and he is a compelling example that change is possible and fulfilling.

But more important, Kevin can no longer stand by while drag queens are promoted to kids – because he knows the truth about the perverted, degrading Drag Queen culture. And Kevin refuses to be silent as children lured into the homosexual and transsexual lifestyles by these activists.

For sharing his message and speaking out, he is experiencing more hardship and hatred now than he ever did as a drag queen, homosexual, or transsexual.

Kevin has been the target of obscene online attacks that lie about him and spread whatever personal information about him they can find. When Texas MassResistance began exposing it, much of it was taken down. But the damage was done. And more keeps being posted. 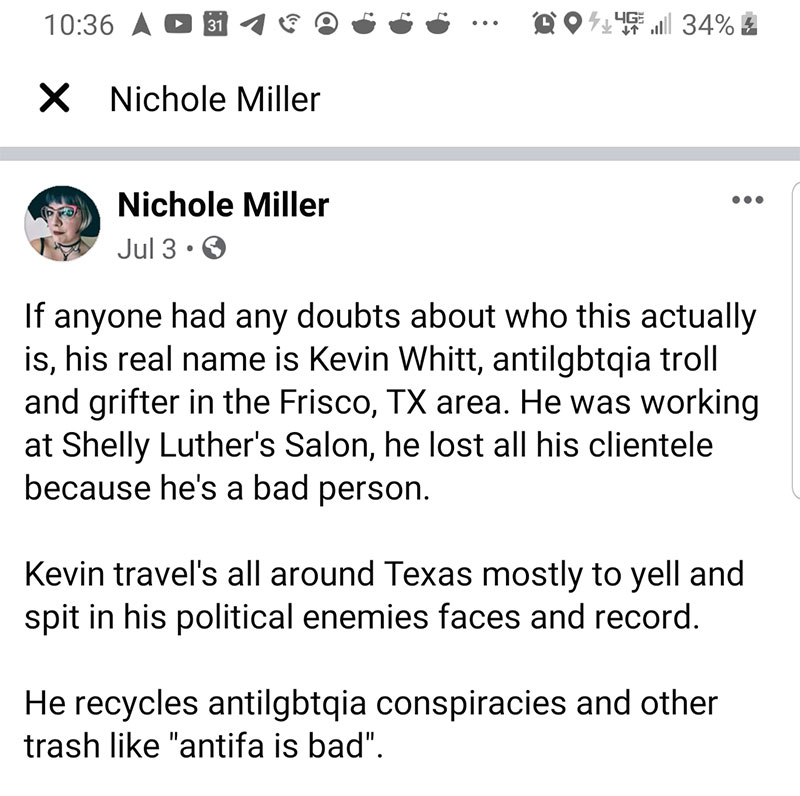 This is one of the less obscene ones.

What kind of people would write and post things to purposely destroy someone’s livelihood? As we’ve said before, normal people don’t behave this way. If you ever spend any time around Antifa types, you will invariably be struck by their narcissism, irrational anger, and general psychopathic outlook. They have a sadistic enjoyment of tormenting their political opponents, though underneath they are cowards. So they must be confronted. As with most of the Left, it’s impossible to reason with them.

Kevin’s GoFundMe page got shut down!

Now unable to pay his bills, Kevin is facing the need to leave Texas and move in with family out of state. But Kevin’s pro-family work in the state is critically important. Legislators and young people alike need to hear his testimony.

So last month, Tracy Shannon set up a GoFundMe page for Kevin. It quickly raised $3,000 of its $10,000 short-term goal to keep Kevin in Texas. But suddenly, GoFundMe shut it down. About a third of the funds were refunded to donors while the rest was transferred to Kevin.

Kevin only got a vague answer from them about violating “terms of service” – the usual non-answer conservatives get. Unfortunately, most people don’t realize that GoFundMe is like most of Big Tech - extremely left-wing and anti-family. (For example, GoFundMe has no problem allowing the fundraiser for Clair Janover, the “woke” Harvard grad who threatened to stab anyone who said “all lives matter”!)

(Of course, if he were an activist on the Left, there would be enormous funds at Kevin’s disposal. Unfortunately, our side doesn’t work that way.)

Now – a new page for Kevin on GoGetFunding

After that terrible treatment, Tracy set up a new fundraising page for Kevin on GoGetFunding, a group that is not anti-family – and welcomes conservatives.

You can donate to Kevin Whitt here!

Contributions will go directly to Kevin to cover his living expenses while he gets back on his feet financially. PLEASE – LET’S ALL HELP KEEP KEVIN WHITT IN TEXAS – AND FIGHTING THE GOOD FIGHT!