Other key GOP legislators shamefully fall into line. RINO state rep attacks MassResistance mother for calling him out on it.

A disgraceful sell-out by so-called conservatives. “You will be primaried” say Texas MassResistance constituents. 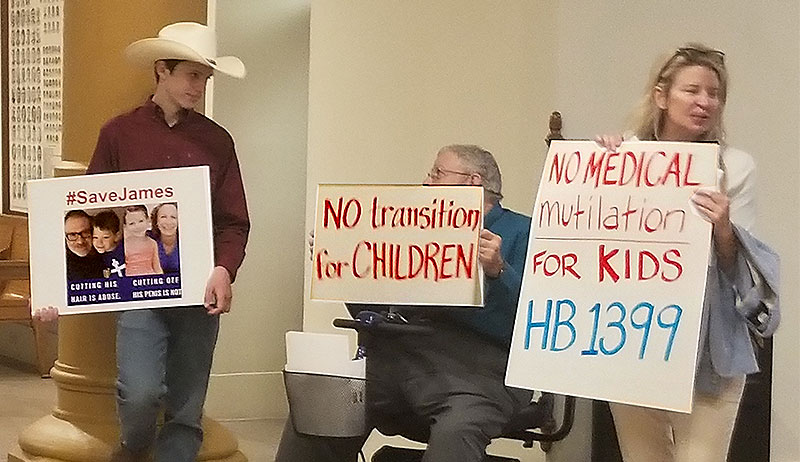 On May 31, the clock ran out on protecting vulnerable children in Texas from the transgender agenda, as the Texas Legislature’s session came to an end. How it happened is reprehensible.

Parents and citizens in Texas have been battling to stop gruesome “sex-change” procedures (including sterilization, castration, and genital mutilation) that are being performed on children by so-called “gender clinics” popping up across the state – many in prominent hospitals. People are outraged that innocent, confused children are being disfigured for life over junk science. 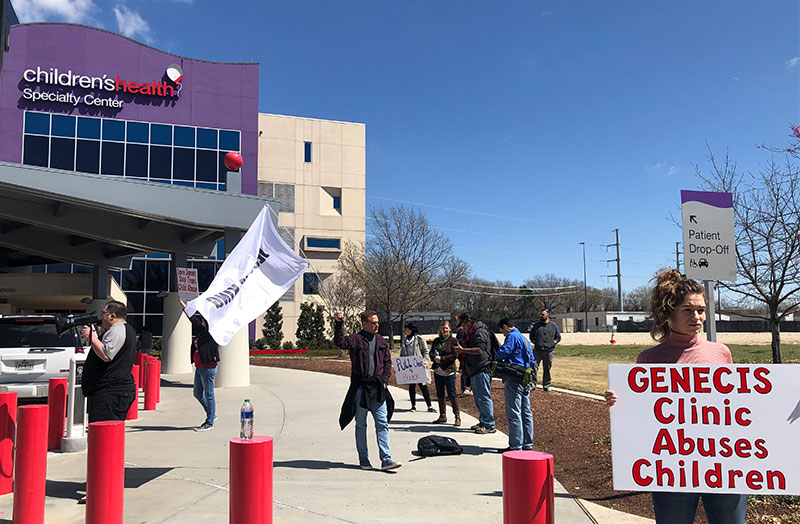 This would seem to be a fairly easy call for the “conservative” Texas Legislature. But there’s a problem. Fueled by the radical LGBT movement’s aggressive ideology, these hideous “treatments” on children have become a huge money-maker for the clinics and Big Pharma. Thus, parents and citizens have been facing off against wealthy corporations in addition to radical LGBT militants.

For the past three months, our Texas MassResistance chapter relentlessly lobbied at the Texas State Capitol and across the state to get this ban passed in this year’s session. After some shuffling, there were two bills in play (dubbed the “Save James” bills):

A week before the session ended, the National File website revealed that the political action committee of the largest “gender clinic” for children in the southwest U.S. (based in Dallas) has been giving large donations to major Texas politicians. 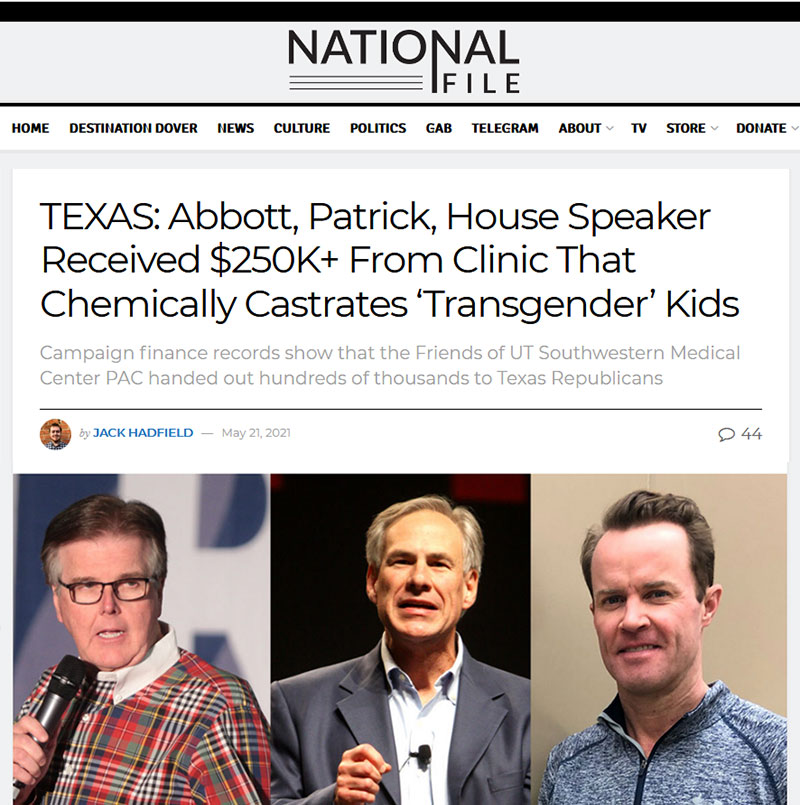 But that’s just the tip of the iceberg. The day after the session ended, National File published another shocking article after they received a tip from Texas MassResistance’s Tracy Shannon. Since 2015, the political action committee controlled by the owner of a “gender clinic” in the Rio Grande Valley has given $800,000 to Gov. Abbott, $825,000 to Lt. Gov. Patrick, and $105,000 to Speaker Phelan. In addition, they gave $200,000 to Texas Attorney General Ken Paxton. That is serious money – and this is just what we know about!

As a result: The transgender bills get killed

Needless to say, the bills that would ban transgender sex-change procedures on children all were derailed. According to multiple reports we’ve received, the Governor, Lt. Governor, and House Speaker exerted their power to make sure that happened.

The strategy was to allow the Senate bill to pass the Senate, but to make sure both bills got stalled in House committees so neither would get to the House floor for a vote. That way, they could be killed in the House without any House members having to go on record voting against them.

Thus, as we reported last month, Texas MassResistance activists were fiercely lobbying for House bill H1399 to be moved out of the House Calendars Committee so it could be voted on by the full House. They were joined by some principled state-wide office holders (who are not under the Governor’s control) such as State Agriculture Commissioner Sid Miller. But the Committee members refused to let it out. 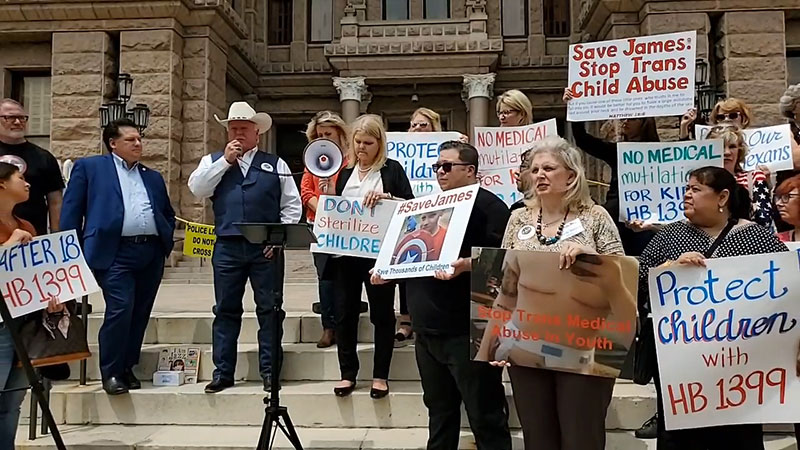 Texas Agriculture Commissioner Sid Miller (in cowboy hat) speaks at rally organized by MassResistance for H1399 outside of the Texas State House.

And they were quite arrogant about it. One of the Calendars Committee members, Rep. Jared Patterson, publicly lashed out at Tracy Shannon because she persisted in questioning him about H1399. In social media posts Patterson called her “crazy” and “trash,” and outrageously claimed that she was “abusive” to his staff. In fact, she was always very polite though firm, but asked tough questions. (Patterson obviously can’t handle hearing from parents on tough subjects!)

Hours before the Texas legislative session ended, in an act of apparent vindictiveness, the committee scheduled H1399 for a House vote – purposefully behind hundreds of other bills, guaranteeing that time would run out before it could possibly be voted on.

The other bill, Senate Bill S1646, was passed by the Senate on April 28 on a party-line vote. But then S1646 went to the House Health Committee, chaired by Rep. Stephanie Klick. She advertises herself as a rock-solid conservative. But, as mentioned above, she took $4,000 from the “gender clinic” PAC. And her position is controlled by the Speaker, who received over $200,000 in “gender clinic” money.

Needless to say, Rep. Klick sat on the bill for the whole month of May - and it never got out of her committee. 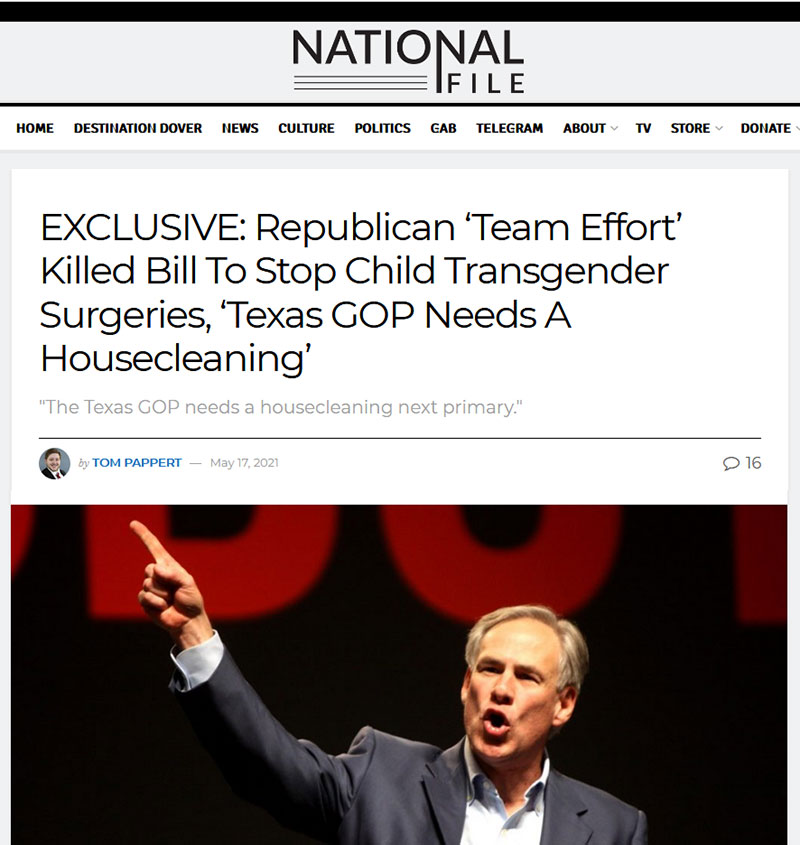 Strong message to traitorous politicians: “You will be primaried”

Texas MassResistance activists and other conservatives across the state are livid that their so-called “conservative” Republican elected officials would sell out on an issue as devastating as this. Reps. Stephanie Klick, Jared Patterson, and many others have been told that their constituents will find Republicans to run against them in the upcoming primary elections.

Texas MassResistance Assistant Director Kevin Whitt had this to say to Rep. Patterson. (He wasn't as polite as Tracy is!):

Governor Greg Abbott, the ringleader of the sellout, is also being targeted by conservatives. Dr. Stephen Hotze chairs the Conservative Republicans of Texas PAC, a force in Texas politics for many years. (He’s also a great friend of MassResistance.) 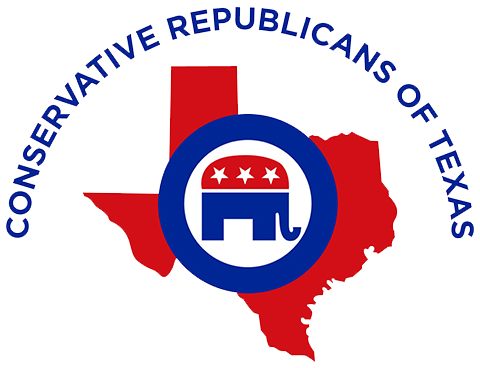 This past week Dr. Hotze announced that his group will be working to elect Sid Miller over Abbott in the upcoming gubernatorial primary. As mentioned above, Miller is currently Texas Agriculture Commissioner and actively lobbied for H1399, and spoke at our State House rally on May 11.

Dr. Hotze does not mince words. He commented on the betrayal of the top Republicans:

Gov. Abbott, Lt. Gov. Patrick, and the Republican leadership have capitulated to the corporations and their lobbyists who support the perverted, transgender pro-homosexual movement.

Protecting children from perverted sex change procedures was a top priority of the Republican Party of Texas and of Conservative Republicans of Texas. Gov. Abbott and Speaker Phelan should have made it their priority this Texas Legislative Session. Had they done so, these bills would have already been passed.

It’s time for a change in Republican leadership across the board … Sid Miller is running for Governor of Texas because he has the courage to Make Texas Great Again and drain the swamp in Austin. Courage matters! Miller will win the Republican primary because the grassroots conservatives are livid.

We couldn’t say it better. We are glad that real Texas conservatives are committed to turning this around. This battle will continue!