The “crime”? Handing out flyers at obscene “Gay Pride” parade

Is this where the rest of the world is headed? 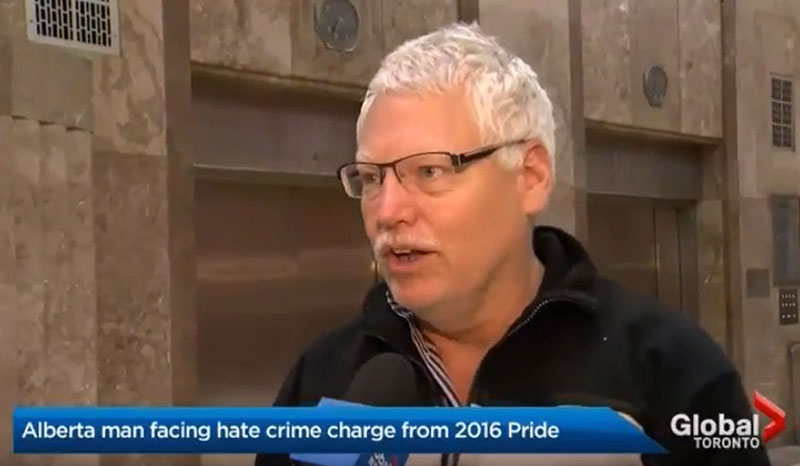 Bill Whatcott interviewed by Toronto TV station outside of the courthouse after his initial hearing, after being extradited to Toronto in 2018.

Back in 2016, Canadian pro-family activist Bill Whatcott used an assumed name to register to march in the Toronto Gay Pride Parade. He and a group of friends called themselves “The Gay Zombies Cannabis Consumers Association.” During the parade, Bill and his fellow “Gay Zombies” wore green body suits and handed out approximately 3,000 “zombie safe sex” packets to the spectators lining the street. 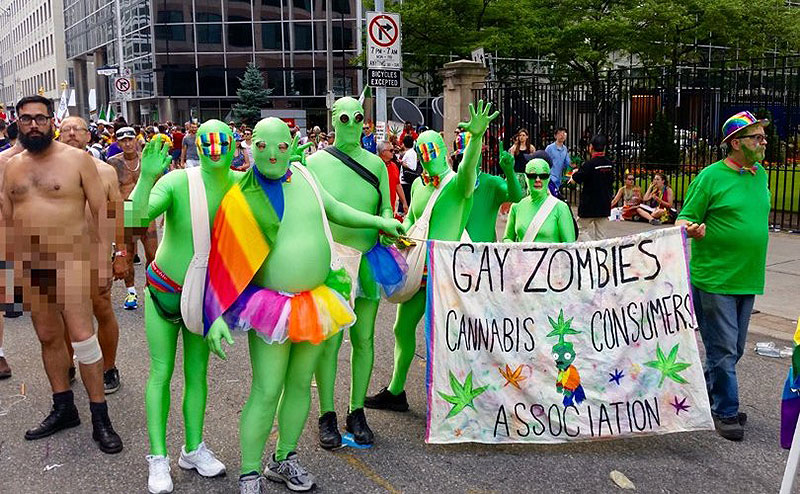 The "Gay Zombies" marching in the Toronto Gay Pride Parade. Note the contingent of naked men right behind them.

Not surprisingly, the parade (supported by taxpayer funds) was an obscene display of full nudity (particularly by males). It promoted a range of unhealthy sex acts and included a large dose of bigoted anti-Catholic and general anti-Christian imagery. Marchers included the Prime Minister of Canada and other prominent politicians. 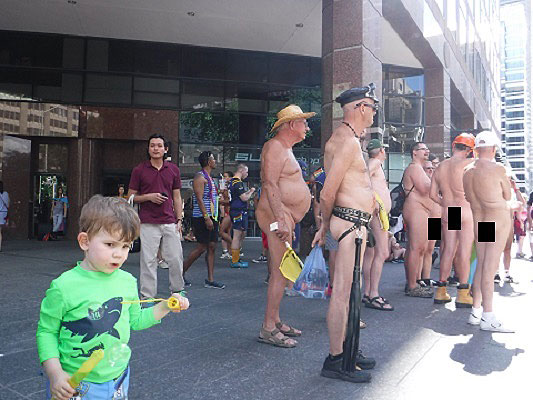 Toronto Gay Pride 2016 Parade participants. Exposing one's sexual organs to a child is a crime there (as it is just about everywhere else). But the police and authorities simply ignored that and went after Bill Whatcott's pamphlets.

Here is the flyer and packet the Zombies handed out to the crowds lining the parade route:

The "safe sex" packet with the flyer inside. They passed out 3,000 of these that day!

The flyer is now under an official publication ban imposed by the Canadian courts. It cannot be published anywhere in Canada or posed on any Canadian website. But you can read it at MassResistance. (Caution: graphic images.)

No one was ever able to identify Bill’s “Gay Zombie” friends, so the focus of the LGBT movement and the Canadian government was on Bill himself.

Soon after the event, two local homosexual activists attempted to sue Bill for $104 million for defamation of the parade participants and of the entire Toronto LGBT community.

Bill’s lawyer at the time submitted this defense of the flyer to the Court:

The message offering Christ as the answer is consistent with efforts by gay members of the Anglican and United churches to become Christians and to fully participate in the religious rites, sacraments, and offices in those and other Christian denominations.

The informational content of those same leaflets is also consistent with the information provided by members of the gay community when it lobbies for increased healthcare funding, and documents authored by the Canadian Aids Society, the City of Toronto Department of Public Health, and the Centers for Disease Control and Prevention, to combat rampant diseases affiliated with gay sexual practices and rampant in the gay community.

No statements in the leaflets were false or defamatory of any one individual, and in particular, it is not defamatory of either of the plaintiffs.

In 2017 the case was dismissed on a technicality. The judge ruled that the two LGBT plaintiffs could not sue for defamation of an entire group, only specific individuals.

That ruling only heated things up more in the LGBT “community.” So several months later, in 2018 – two years after the parade took place – the Attorney General of Ontario personally authorized the charge of “Willful Promotion of Hatred” against Bill – as absurdly outlined in Section 319 of Canada’s Criminal Code. This “crime” is the Canadian version of a felony in the U.S. and carries a penalty of up to two years in prison.

At that time Bill was living in Alberta, so they put out an over-the-top Canada-wide arrest warrant against him. Such a warrant is normally only issued for very serious crimes. When Bill found out, he simply turned himself in at the police station in Calgary for extradition to Toronto.

After an initial hearing, his full trial was to begin just when COVID hit. A large number of serious criminal cases were simply dropped by the Canadian prosecutors. This one in particular would have been considered ridiculous and a frivolous waste of time in most parts of the world. But the “woke” Canadian prosecutors – led by the pro-LGBT Ontario Attorney General – refused to dismiss this case. They were determined to make an example of Bill Whatcott and throw the full force of the law against him.

The prosecution – called the “Crown” in Canada – is seeking an 18-month prison term. Bill rejected a plea deal for “three years of house arrest” because he feels he has a moral obligation to fight the charge entirely. After a few COVID postponements, the trial was scheduled for this month.

Bill gets a SUPER lawyer

John Rosen is the most prominent criminal defense lawyer in Canada. He is believed to have defended the most murder trials - and the most notorious criminals – in Canadian history. He is known for being very aggressive, extremely skilled, and successful. 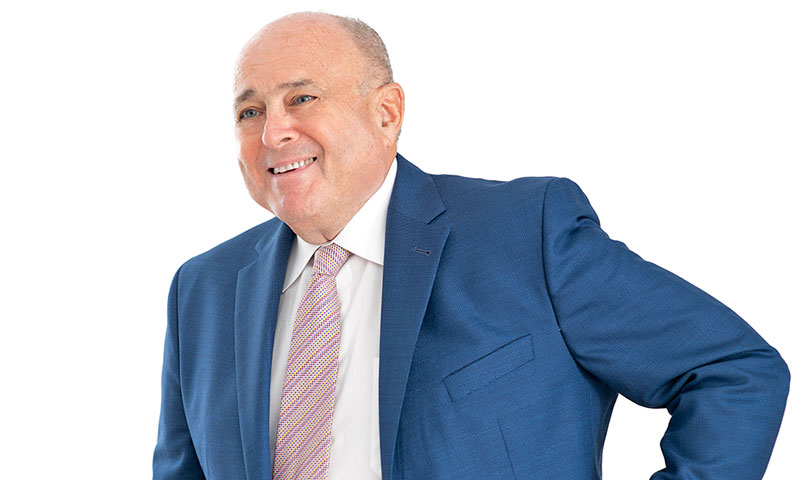 Earlier this year, Mr. Rosen agreed to represent Bill Whatcott in this case. This is an extraordinary turn of events. We’re told that he doesn’t necessarily agree with Bill’s position, but he believes that this is an important civil liberties issue. (That’s a refreshing change from most lawyers these days who refuse to take “culture war” cases they don’t personally agree with.) Bill traveled to Toronto a few weeks early to prepare with Mr. Rosen and his staff.

Declining a jury trial. In 2019, reacting to a politically-incorrect murder verdict, the Canadian Parliament eliminated peremptory challenges in jury selection. In most countries attorneys can reject jurors, without giving a reason, whom they feel might be biased. But that is no longer possible in Canada. Since Toronto has a large number of pro-LGBT leftists, this presents a huge problem for jury selection. The judge, Robert F. Goldstein, is thought to be reasonably fair. Thus, Mr. Rosen has chosen to go with a judge-only trial rather than a jury trial.

The trial started this past Monday, October 4, 2021. The first day lasted a little over two hours. The Crown started with the clerk reading a 15-minute description of the charges against Bill and a review of the events surrounding during the “Gay Pride” parade and Bill’s participation in it. 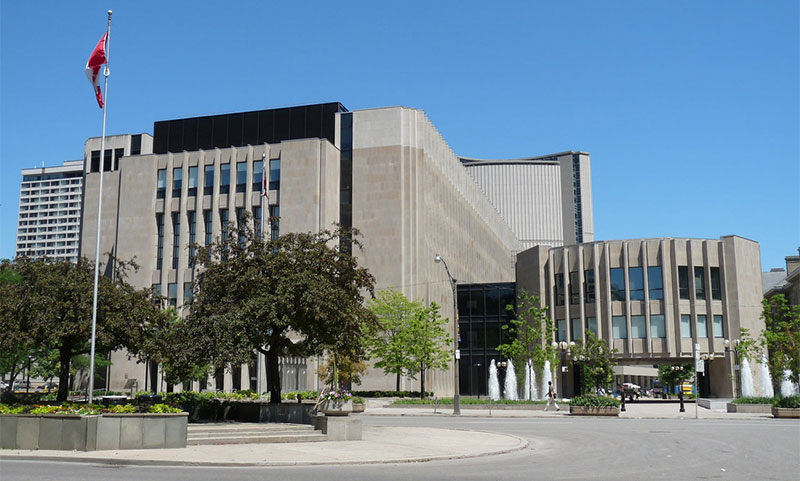 The Superior Court of Justice in Toronto, where the trial is taking place.

Bill’s attorney will likely not have him testify during the trial. Thus, the rest of the first day’s session was the playing of a video of Bill’s lengthy interrogation in 2018 by the two Toronto police officers who had flown to Calgary to extradite him to Toronto.

In that video Bill did quite well. He talked about his Christian faith and the well-documented medical dangers of homosexual behavior. In particular, he brought up MassResistance and our medical reference compendium, The Health Hazards of Homosexuality, several times. He also presented a well-reasoned argument as to why his actions had nothing to do with hate – but instead with compassion. (It’s worth noting that Bill has worked as a licensed practical nurse and compassionately cared for AIDS patients.)

Bill’s reaction this week to seeing that video:

Looking at my interview three and a half years later, I thought I did okay. I think for any fair minded person who looked at the interview and who listened to me and the police officers going back and forth it would be clear I am a Christian who disagrees with the homosexual lifestyle and the Toronto homosexual parade in particular and no actual “hate crime” happened. Anyway, that’s what I think looking at it. We will see what the judge thinks next week.

Adjourned until this Friday

After that, the judge adjourned the trial until this Friday, October 8. That will be a very interesting session. An infectious disease specialist selected by the Crown will be coming in to give testimony on how Bill’s flyer was completely incorrect and is therefore a “hate crime.” It will be interesting to see what she has to say, and what happens when Mr. Rosen cross-examines her.

Interestingly, Dr. Paul Church, a urologist, and a few other doctors had offered to come to Toronto as expert witnesses on Bill’s behalf. However, it was decided that the anti-Christian climate there is so bad that the opinion of any doctor who professed to be a Christian would be simply dismissed by the judge. And no medical expert who is not a Christian (or Orthodox Jew) was willing to testify on Bill’s behalf.

The totalitarian clampdown on civil liberties in Canada is now in full swing. The most recent outrage is the continuing harassment of Pastor Artur Pawlowski for daring to keep his church open during the fabricated health crisis. But as we see, the government’s harassment of conservatives has been going on for much longer than the past year.

The ridiculous charges against Bill and the vehemence that the Canadian government is pursuing this is frightening. However, they are used to simply steamrolling over their victims in court. John Rosen’s presence is a big deal. This could throw some cold water on a lot of other anti-family attacks by government across Canada and beyond.