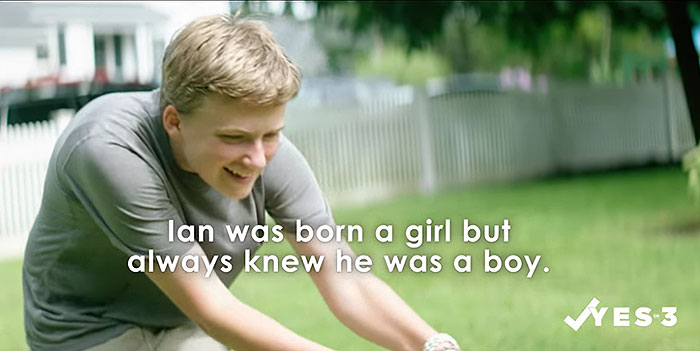 The transgender movement is now using children in their videos to promote the acceptance of so-called "sex-change" as normal.

The radical LGBT lobby is showing their true colors – and it’s a scary picture. In Massachusetts they are promoting the gruesome concept of “transgender children” in their advertisements. They hope this will persuade people to vote to preserve a statewide Orwellian transgender “bathroom bill” law.

This law requires public accommodations (and therefore the general public) to validate the irrational and destructive transgender ideology. It forces people to deny biological reality. It should be overturned with a "NO" vote on Question 3.

Last week the LGBT advocates began promoting a video (which they’re also using in their fundraising emails and as a TV commercial) featuring a family with a mother, father, and two girls. But one of the girls has “transitioned” and now says she’s a boy.  "Ian was born a girl but always knew he was a boy," says a video caption. Although it appears that puberty blockers and male hormones have altered her features and lowered her voice a bit, she is still a girl despite her boy’s clothes and stylish male haircut.

The message is that it’s the girl’s “civil right” that the public be forced to treat her as a boy – because it’s the “right” thing to do. The law is thus portrayed as "protecting children."

It’s very slick and psychologically well crafted. But let’s look at what’s really happening in the background that the LGBT movement won’t talk about.

As we documented as far back in 2007 in our Boston Children’s Hospital reports, the medical procedures used for these so-called "gender transitions” are horrific and experimental. Young children are given “puberty-blocking” drugs that not only stop puberty from taking place, but render the child sterile for life. Next, they are given opposite-sex hormones. Then, surgeries are often performed: breasts and genitals are removed, while body parts may be “sculpted” to resemble those of the opposite sex. It is ghoulish. In order to maintain this charade, opposite-sex hormones must be taken indefinitely (with long-term health risks). 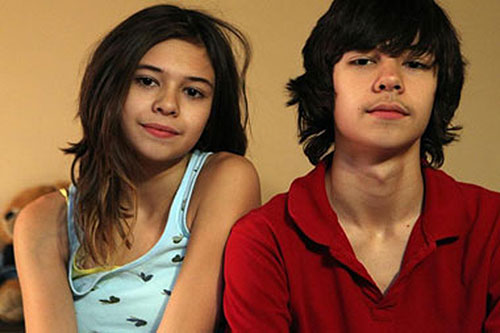 In 2011 the Boston Globe wrote about these 14-year-old identical twin boys, one of whom had "become" a girl. For the past three years his parents had him undergo powerful puberty-blocking drug treatments. As a result, the boy was five inches shorter than his brother and had some female-like features. This was to be followed by series of female hormone injections and ultimately operations to remove male body parts and "create" female-imitating body parts - which would leave him sterile for life. This was celebrated as medical "progress."

What we do know is that responsible medical people, as well as former transgenders themselves, tell us emphatically that this does not solve the underlying psychological problems. It generally only makes them worse, and makes people more (not less) suicidal. Suicide attempts and deaths are sky-high for the “transgender” population. 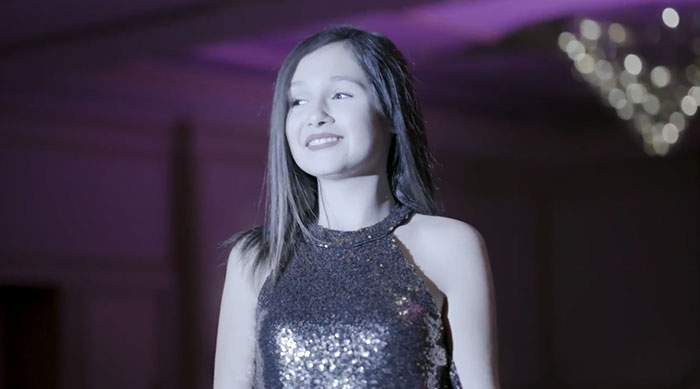 A boy with what appears to be hormone-induced breasts is featured in an earlier "Yes on 3" video released last May.

Last year, Dr. Quentin Van Meter, an endocrinologist at Johns Hopkins University who worked in their gender transition medical group, gave a shocking account of what really happens to children who go through this, in his speech The Terrible Fraud of Transgender Medicine.

Dr. Michelle Cretella, president of the American College of Pediatricians, said it best in this classic short video:

VIDEO: The Dangers of a Transgender Ideology (5 min 40 sec)

In Massachusetts: Vote “NO” on Question 3

As the Nov. 6 election gets closer, this kind of truth needs to be told – not suppressed.

It is Question 3 on the ballot. A “yes” keeps the current law as it was passed and signed by the GOP governor. A “no” repeals it. The current law makes it a crime for anyone, punishable by fines and possible jail time, not to treat cross-dressing men as if they were real women (or vice-versa) -- in any public accommodation, including locker rooms, restrooms, bars, restaurants, etc. It is Orwellian, and was crafted to force people to accept the transgender agenda.

As we recently reported, MassResistance activists in Massachusetts have formed a “No to Queston 3” official ballot committee. There is already another ballot committee fighting this that focuses on the bathroom issue and men going into women’s restrooms. Our committee will focus on telling the truth about the transgender agenda that this bill forces on the public.

What’s disappointing is that our “No to 3” committee has gotten tepid (or worse) support by establishment conservatives in Massachusetts. They have said that this approach ruins their more politically correct “messaging” that their “focus groups” approve of. We believe that there’s room for both sides, and a necessity to educate the public.

We are dealing with a forced imposition of a lunatic ideology on everyone, with prosecution under the law as a hammer. The LGBT movement has a lot of money, a honed propaganda machine, and support by politicians, corporations, and the entire liberal establishment.

We’re all pushing hard toward Nov. 6!