Our impact is being felt! 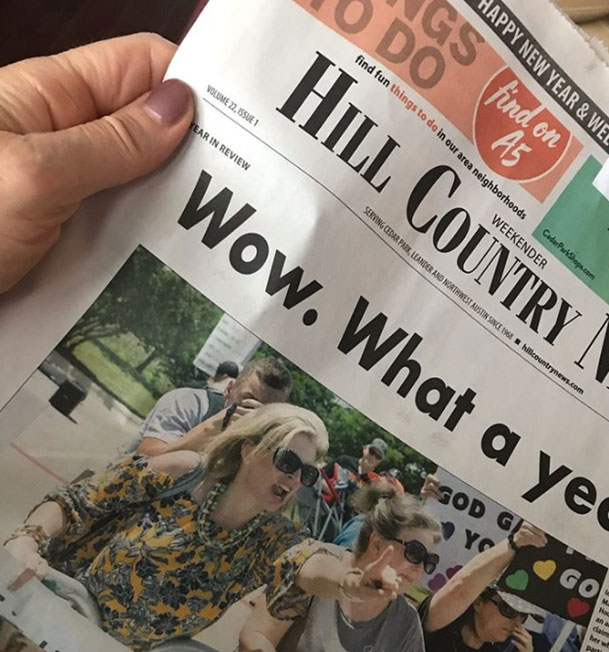 But it was our success in confronting and stopping the offensive “Drag Queen Story Hour” (DQSH) library events for young children that really ignited the liberal media. In their 2019 end-of-year coverage, several named MassResistance as the force opposing the “Drag Queen” push in their communities.

Leading the charge during 2019, of course, was Houston MassResistance leader Tracy Shannon.

Tracy and her team turned the DQSH world upside down by exposing two of them to be convicted child molesters and another to be a convicted prostitute. And the team published numerous reports revealing the disgusting and sexually perverted activities that other Drag Queens had posted of themselves on social media.

In addition, Tracy and her team helped organize powerful protests by local pro-family activists against Drag Queen events across Texas. Their efforts were extremely effective – and the media definitely noticed! 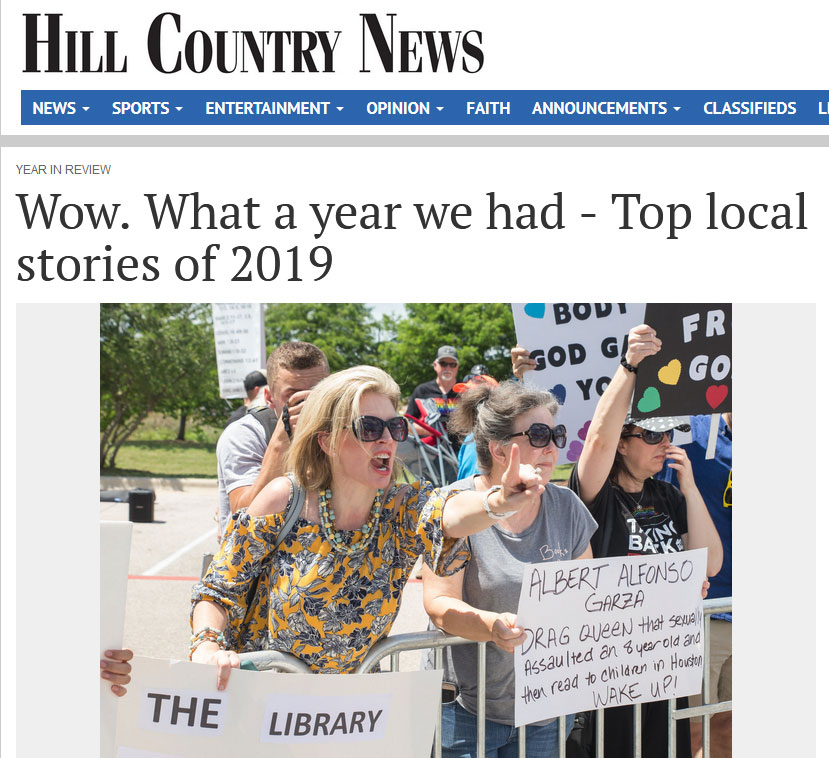 Her team’s efforts pushed back so strongly against the DQSH in Leander, Texas that the City Council took action to ensure that only city-approved events could take place in the library meeting rooms. This policy change has inspired other city councils to take similar actions.

From the article, Leander Library controversy spirals out of control:

The library had originally planned the Storytime event as a low-key activity to celebrate Pride Month. But, after harsh criticism posted on local social media, the city moved to cancel the event, which drew even more criticism from supporters.

The controversy quickly drew attention from national groups, like InfoWars and MassResistance on one side, and the ACLU and several world-famous authors, including author Neil Gaiman, on the other.

Open Cathedral, a Leander church, responded to the city’s cancellation by renting a library room in order to keep the event alive by hosting it themselves. Their June 15 event drew a sizable crowd and went off safely.

But it drew nearly 300 protesters, evenly split between supporters and critics of the event. City officials estimated it cost $20,000 to police the protest.

In the wake of the council’s decision to cancel the Storytime event, the city has seen the departure of most of its senior library staff, including Library Director Priscilla Donovan who served the library for decades. Several of the departing library staff members explicitly cited the city’s decision and fears of being targeted for discrimination as the motivation for their departure.

Earlier in 2019, Tracy and Houston MassResistance had been in the crosshairs of The Texas Observer, a virulently pro-LGBT mainstream publication based in Austin. They were furious at our success. 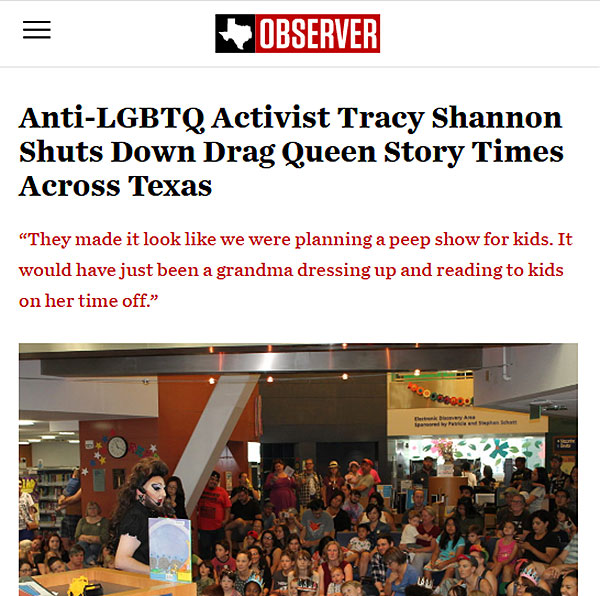 The liberals’ animosity is quite childish. They included this report in their “Fringe Factor” series – as if parents are the fringe group and Drag Queens are normal!

And they even published a special graphic about Tracy. (Note that they link her to the “infamous hate-monger” Steve Hotze. Dr. Hotze is actually a great pro-family hero in Texas.)

Another interesting end-of-year article was in the local newspaper in Huntington Woods, Michigan. We had caused a media firestorm there in December, 2018, over the Drag Queen Story Hour event, and the media coverage continued to escalate into 2019.

It had shaken the town so much that at the end of 2019, the local paper felt compelled to cover the story again. 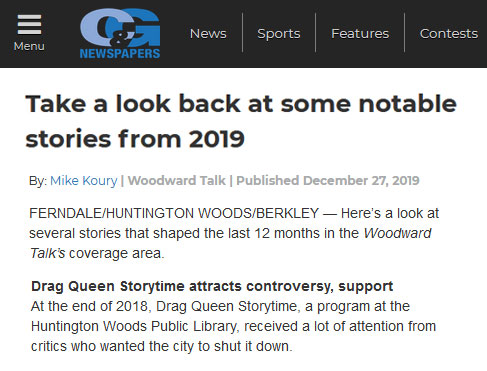 Article in the C&G Newspapers in Huntington Woods.

From their article, Drag Queen Storytime attracts controversy, support, which was not exactly accurate:

At the end of 2018, Drag Queen Storytime, a program at the Huntington Woods Public Library, received a lot of attention from critics who wanted the city to shut it down.

The controversy started after former City Commissioner Allison Iversen sent an email to the youth services director at the library, Joyce Krom, advocating for the discontinuation of the event or to change it to an adult event.

The program gathered the attention of an out-of-state group called MassResistance in part because of Iversen, who claimed that this happened accidentally. Iversen said she thought she was communicating with a resident and that she “would never intentionally invite an outside group to protest in our neighborhood.” [NOTE: This part appears to have been made up by the reporter. We were first contacted by other residents. We only communicated with Allison Iverson after our campaign there had already begun.]

Though the City Commission affirmed at a December 2018 meeting its support for the program and that it would continue, it didn’t stop protesters from protesting the next Drag Queen Storytime Jan. 26.

Of course, since then, the city of Huntington Woods has not brought the program back! Even though our activism against the program began over a year ago (late 2018), the local press could not pass over the impact we had in the area!

And all the way to Italy!

We recently caught wind of this article from an Italian site that reports on the work of Houston MassResistance: 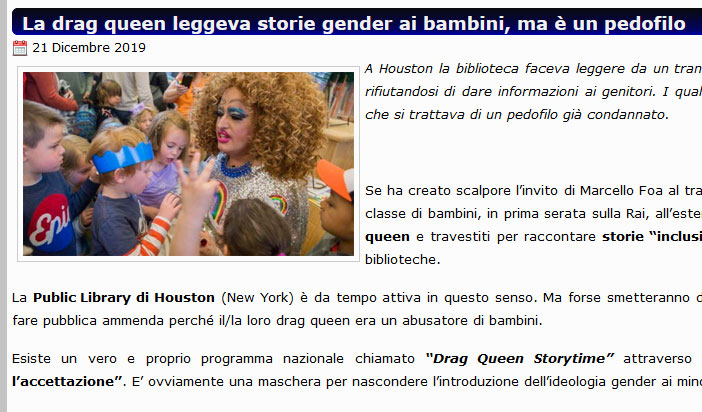 And we are winning!

MassResistance ended the year 2019 on a high note. Our reports have been reprinted (and hugely shared) on many other pro-family websites. We have increased the number of chapters operating throughout the United States and the world. More and more outraged citizens and concerned parents are standing up and getting involved!

We look forward to an even more successful 2020! 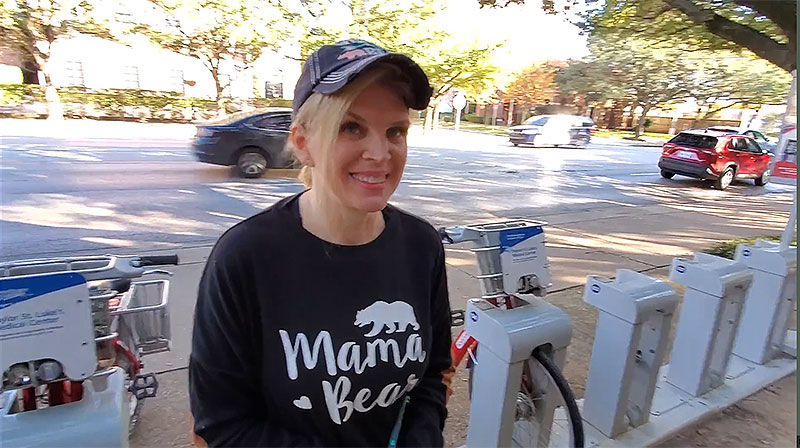