It’s “Banned Books Week” in public libraries across the country. An excuse to push more pornography and homosexuality on children.

"Books Unite Us and Censorship Divides Us" - a not-so-subtle attack on parents protecting children.

It’s “Banned Books Week” in public libraries across America. And it’s hard to miss the big displays and self-righteous (but very sophisticated) messaging when you walk in the door. You’re made to feel like your library is a freedom fighter that’s protecting you from the narrow-minded zealots who want to keep folks from reading Of Mice and Men, To Kill a Mockingbird, or Orwell’s 1984. You’re made to feel good about fighting such censorship!

But the Banned Books Week message is very dishonest and misleading. We’ve followed the book challenges in libraries for decades. Nobody really cares what books adults read. The red-hot battle involves parents outraged over the books available to children and teenagers. There are increasing numbers of lurid and explicit pornographic, homosexual and transgender-themed books being placed (and promoted!) in the children’s and teens’ sections of libraries. There are also books pushing hatred of America and dark anti-Christian themes. Normal people understand that vulnerable children need to be protected. But just the opposite is happening in libraries today.

Begun in 1982, Banned Books Week is a well-funded yearly push by the far-left American Library Association (ALA), which just about every library belongs to (and pays hefty dues to). The ALA has long promoted LGBT events in libraries and schools and actively fights to keep LGBT books from being removed by officials.

The ALA also runs an official-sounding “Office of Intellectual Freedom” that is dedicated to giving children the “freedom” to read pornography despite their parents’ objections. They also publish lists of the purported “most banned and challenged books” which strangely are peppered with mainstream titles such as those mentioned above. A main purpose of Banned Books Week is clearly to intimidate conservatives.

We have recently reported about the parents and citizens in Gillette, Wyoming dealing with the pornographic and LGBT children’s books in their local Campbell County Public Library, and their confrontation with their public officials over it.

Not surprisingly, the library is using Banned Books Week as a vehicle to portray the outraged parents and local citizens as narrow-minded censors, and make it look like the library (and the rest of the public) are the “freedom fighters.” Below is the display in the Gillette Branch. 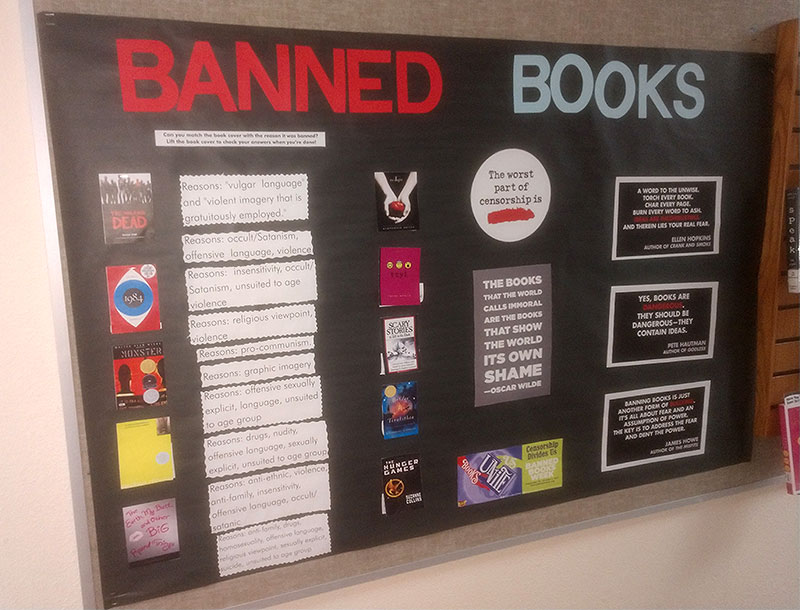 This is what you see when you walk in the door -an entire wall (and more) devoted to "Banned Books."

The left section of the display (below) includes 1984 – a book for adults that virtually no one would want to keep out of a library – shown along with The Perks of Being a Wallflower (second from bottom) which is a vile, disgusting “teen” sex book; and The Earth My Butt, which is a vulgar, depressing “teen” book. The subliminal message is that they’re all being equally “challenged” by narrow-minded local people. 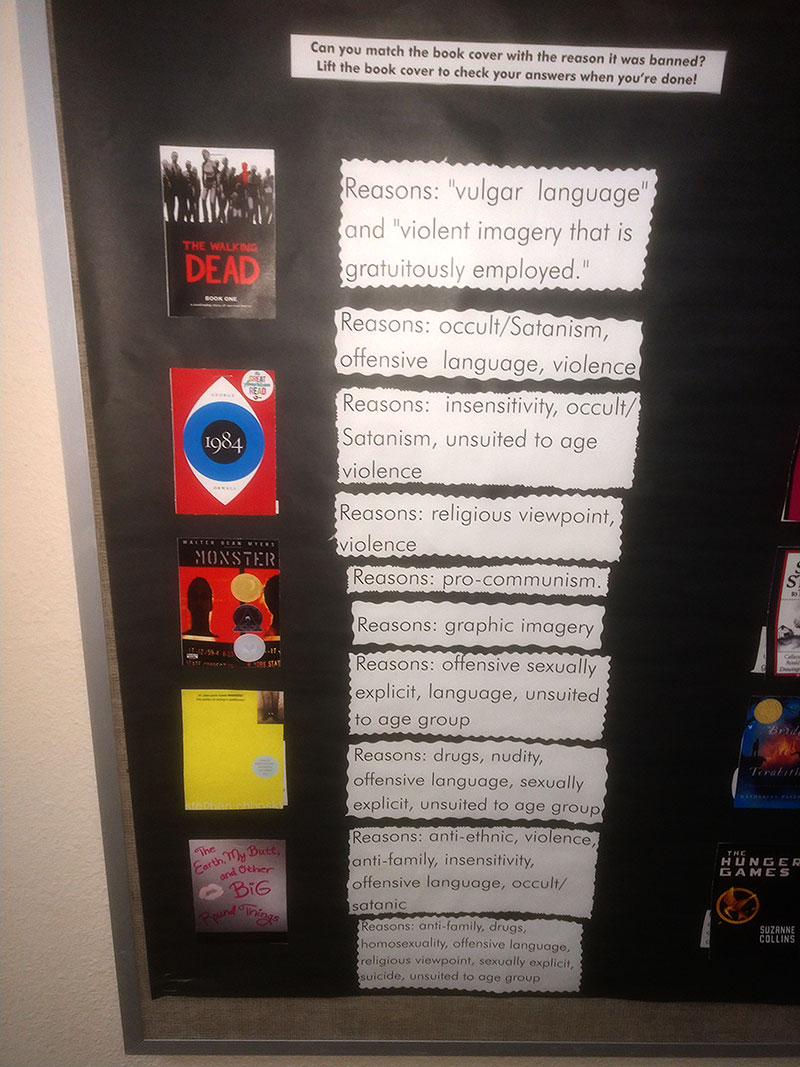 The middle and right sections are repugnant propaganda snippets (likely from the Library Director and staff) clearly aimed at stirring up the public against the local parents and any others who might get involved. To reiterate, the parents in Gillette and across the country are only trying to protect children. They don’t care what adults read. But the library’s Banned Book Week message is to falsely portray them as vicious, dangerous book-burners who want to censor what everyone reads. 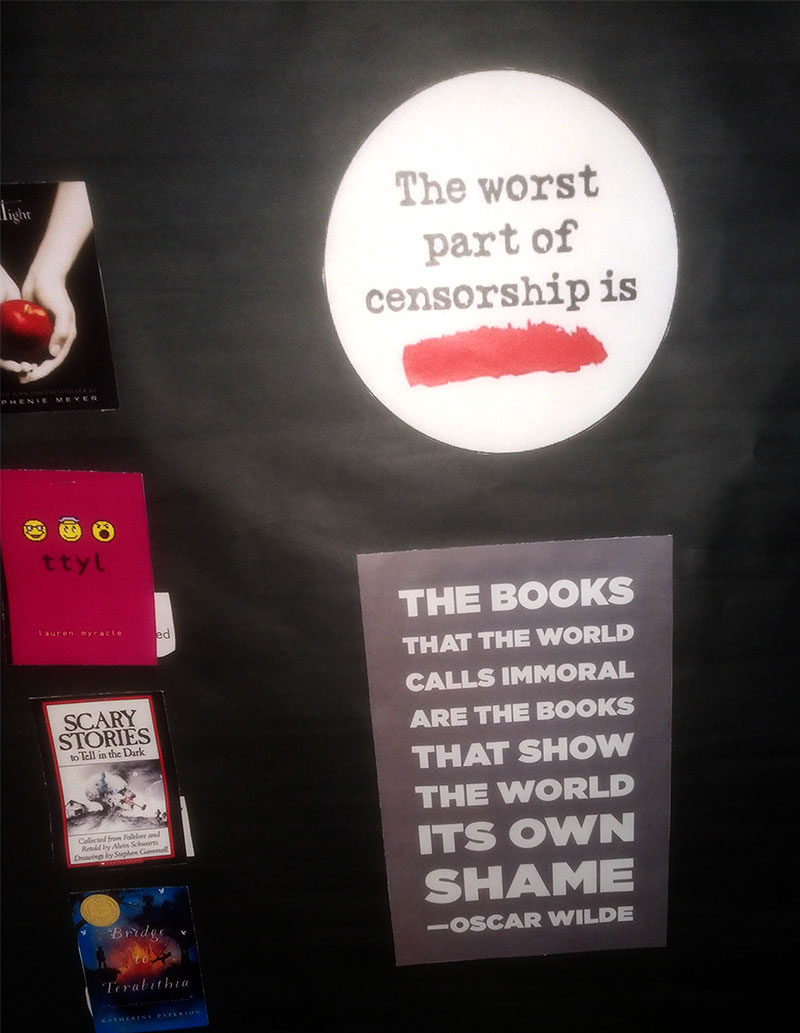 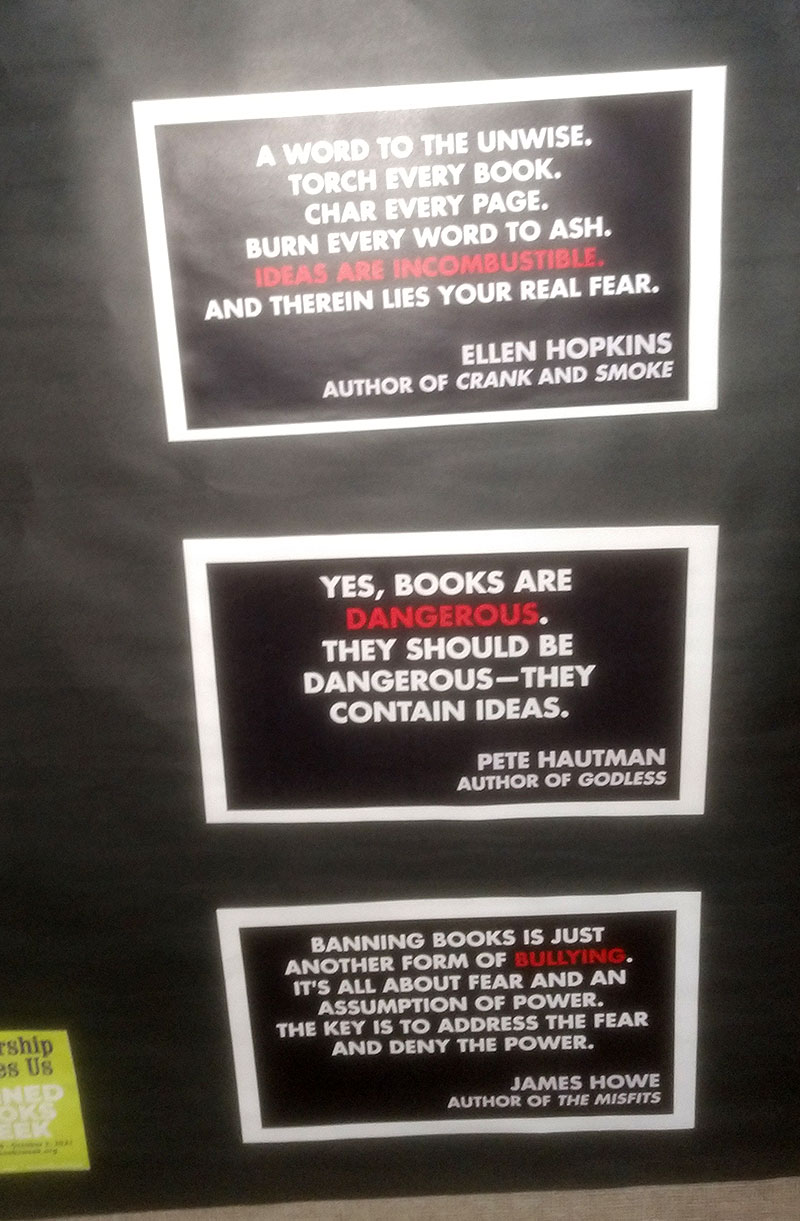 Next to the main display is another display of “banned” books. Note that Ray Bradbury’s Fahrenheit 451 and a few other relatively mainstream books (that no one is seriously trying to censor) are mixed with some borderline kids’ books. Again, the intent is clear: to inflame the public against the so-called “censors.” 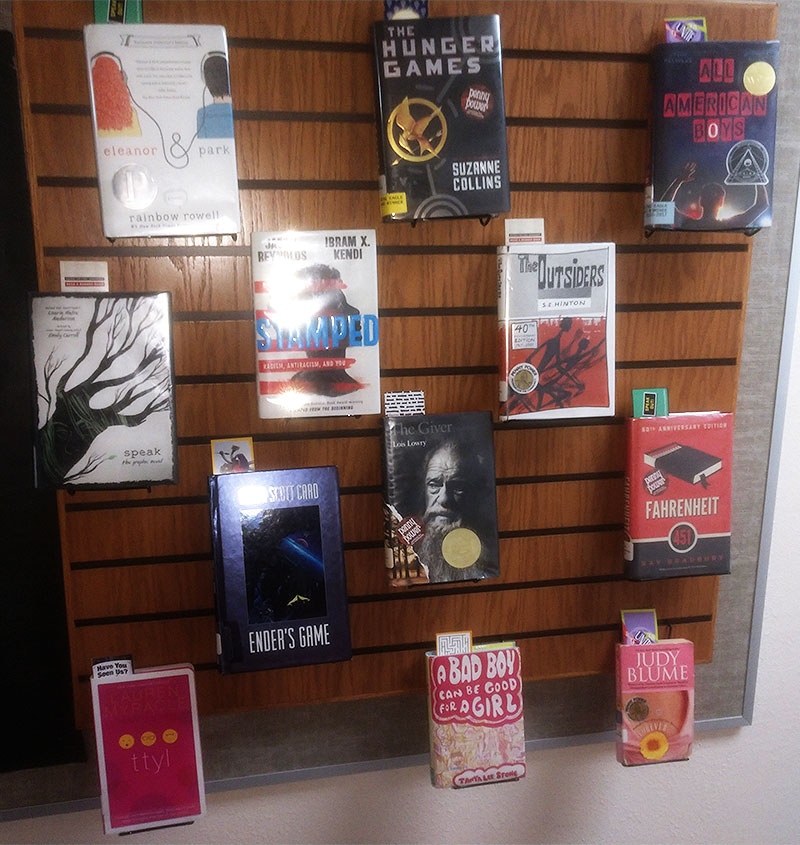 Judge for yourself: Is this book or this book - both of which are in this library – on the same level as Fahrenheit 451 or 1984?

And to drive the wedge deeper into the community, the Campbell County library is using the Banned Books Week event to invite teens to read the books that parents want removed!

And naturally, the local (liberal) newspaper has enthusiastically promoted the event.

Where is all this coming from?

People of a certain age can remember when public libraries were both safe for children and places for children and teenagers to find wonderful, uplifting, and edifying books. In most places those are distant memories.

This horrible assault on children appears to have come from two directions. First, since the “sexual revolution” decades ago, people with their own sexual dysfunctions and emotional issues – and leftists who support them – have been attracted to public libraries where they can push societal change. These are the people who select the children’s books.

And secondly, since the “gay rights” revolution in the '80s and '90s and its obsession with children, there has been a flood of homosexual (and transgender) writers putting out children’s and teen’s books, along with a cottage industry of groups giving them “awards.”

That combination has been a disaster for public libraries everywhere. To see how bad this has become, see Debbie DeGroff’s excellent website, What’s Inside Children’s Books?

Probably the biggest fraud of Banned Books Week is that it’s the libraries themselves that are the biggest censors. Try to find any books critical of homosexuality or transgenderism, especially books such as The Health Hazards of Homosexuality or books about healing from that addictive behavior.

Finally, there actually are many libraries across the country staffed and run by normal, sensible people. It’s not easy, though. It takes a strong Library Board to make sure that happens. But it’s certainly possible – and it’s what we are helping people across America make happen in their towns!