MassResistance parents had revealed that event included a convicted child molester. “And we’re far from done investigating this,” they say. 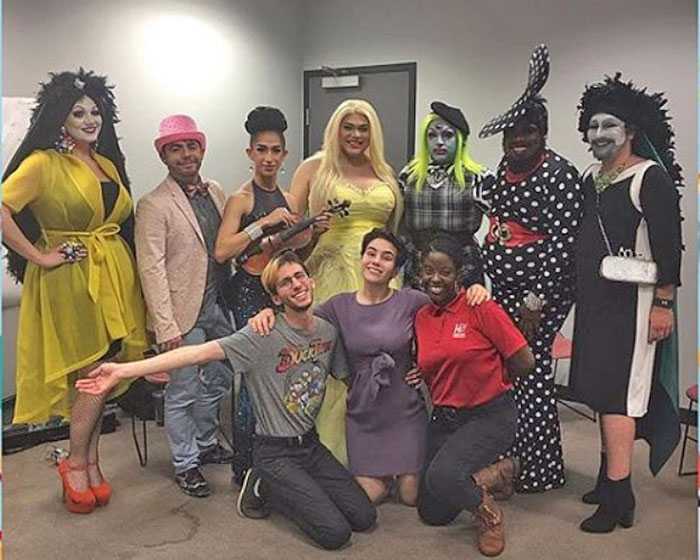 In this social media post promoting the Houston Public Library Drag Queen Story Hour, the two organizers (front row, left and center) pose with some of the Drag Queens and a helper. To our knowledge, all of the people standing are men.

Just about everyone believed that stopping the “Drag Queen Story Hour” in Houston would be politically impossible. It had aggressive support from the Mayor and other prominent politicians, as well as the library officials.

But Houston MassResistance ignored that message. They dived right into the battle – protesting outside the library and confronting the politicians at City Hall. 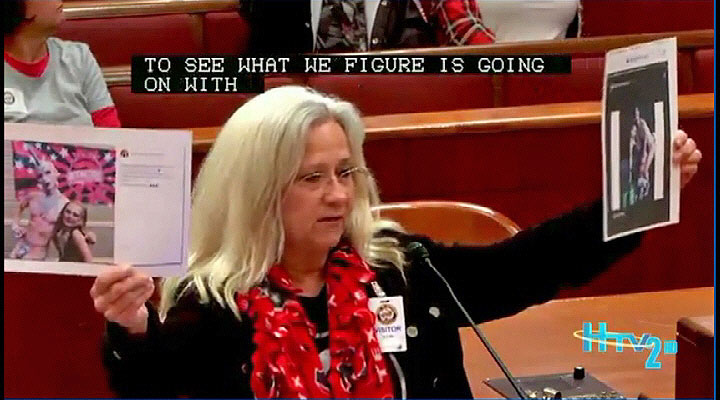 While testifying during a Houston City Council meeting, this Houston MassResistance mother held up two photos from the report of children who are being horribly exploited by the "Drag Queen" movement.

Last week, Houston MassResistance revealed that one of the “Drag Queens” was a convicted child molester. That was followed by a firestorm of media coverage largely slamming the City of Houston. And we made it clear we’re preparing to reveal even more.

Finally, the Drag Queen organizers announced they’ve had enough and are halting the program! On Tuesday, March 19, the two outside organizers of the event published an article in Houstonia magazine announcing that they were “stepping aside” and discontinuing Drag Queen Story Hour.

In a sense, at this point they had no choice. We suspect the political establishment actually made this call. The outrage over a sex offender being in the room with children, as well as the whole concept of mingling homosexual Drag Queens with small children, had become widespread and probably overwhelming. We can just imagine the flood of phone calls and emails the Houston Library and city offices must have received.

A dishonest and misleading article

The Houstonia magazine article very likely made things even worse. In true left-wing style, the organizers attempted to portray themselves and the Drag Queens as the actual victims! They claimed that the Drag Queens care only about “literacy and acceptance” and were unfairly maligned by bigoted parents. But it also brings up even more disturbing questions. Some examples:

What they’re not saying

We believe that another big reason they’ve decided to discontinue the Houston Drag Queen Story Hour is that there’s even more to reveal about that sordid event.

Many of these Drag Queens are profane “adult entertainers” by profession and appear to lead dysfunctional lives consumed by unhealthy sex practices. They are not ashamed of it; they include it in their social media, videos, advertisements, etc. But they want it ignored when they’re part of Drag Queen Story Hour. Are these the kinds of people public officials should be choosing to read to children in a library? These men are not good “role models” for anyone.

Role models for young children? This is one of the tamer social media photos of the "adult entertainment" that the Houston Public Library Drag Queens are involved with.

Their reaction to our exposing the registered sex offender is particularly frightening. According to court documents, this man was convicted of performing oral sex on an 8-year-old boy, and then having the boy perform oral sex on him. The Drag Queen organizers have not shown any anguish over this heinous act, but are only upset that exposing it ruined their program. This alone should be a big red flag. 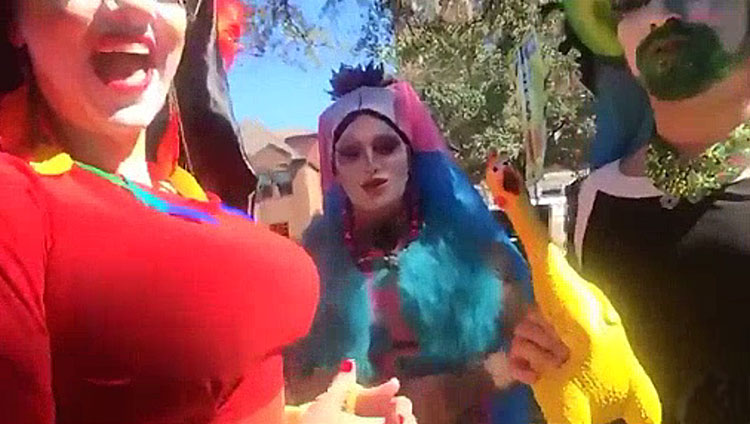 Outside the Houston Public Library just before a Drag Queen Story Hour event, one of the drag queens holds up the rubber chicken he's carrying around, as the others appear to be amused by it. That is a “gay” code word for pederasty. “Chickens” in “gay” slang refers to under-age boys that older gay men find and seduce. How much clearer a message do people need?

But as we have said, there are hundreds of more pages of material we’ve put together that’s even more disturbing. And more is being uncovered about officials purposefully not following their own rules – and of the complicity of the politicians in this whole sordid affair.

There is no question this is a big victory for our people. It’s probably the biggest defeat for Drag Queen Story Hour so far. This is the new age of pro-family activism!