Free Speech Is Dead in Canada: The Persecution of Christian Activist Bill Whatcott

Americans must heed the warning – compelled speech is on its way 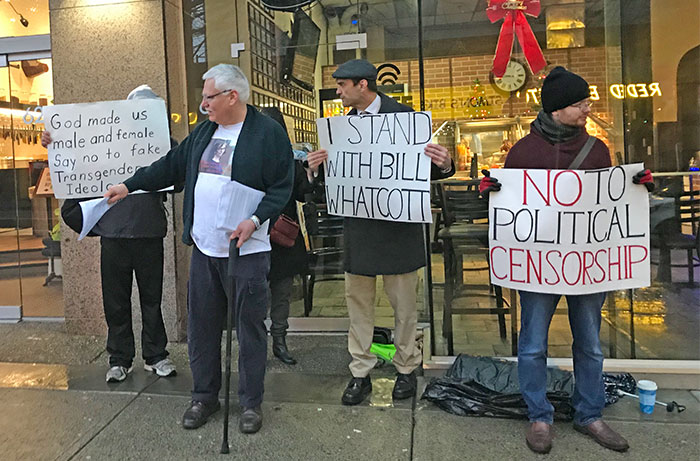 Bill Whatcott hands out flyers on the sidewalk outside the offices of the British Columbia Human Rights Tribunal joined by some of his free speech supporters.

In the past year, I witnessed two frightening assaults on free speech by a kangaroo “justice” system. This wasn’t in some banana republic, North Korea, or China; it was in Canada. These were gut-wrenching experiences for me.
These stories from Canada are potent warnings to the U.S.

There can be no doubt of that given the LGBT-driven lawsuits we have already seen against florists, bakers, and wedding photographers. The Civil Rights Commission of Colorado has tried to compel speech from Jack Phillips of Masterpiece Cakeshop. We’re seeing numerous battles over bathroom use and forced use of silly pronouns in our media, colleges, and public schools. The EEOC already interprets Title VII (employment) to protect employees from “sexual orientation” discrimination.

So, we’re already on that totalitarian road; Canada is just further along.

An Enemy of the Canadian State

The victim of Canada’s repressive “injustice” system is Bill Whatcott, a pro-family born-again Christian activist. He is about to have his life ruined by the courts in Canada (with fines, possible jail time, ruined employment prospects, social ostracism). But he will not bend to tyranny and is standing for free speech.
Whatcott’s two ongoing cases are discussed below:

What terrible “hate crimes” did Whatcott commit?  The Orwellian tyrants in Canada deem it criminal to speak the truth about transgender ideology and the health hazards of homosexuality. Furthermore, he speaks from the unwanted Christian viewpoint. Then he adds a dash of humor. And so he has become an Enemy of the State in Canada.

While there’s no First Amendment in Canada, there is the 1982 Charter of Rights and Freedoms. But the Charter includes a huge loophole that LGBT proponents are exploiting in their battles against “discrimination.”  The “guaranteed” freedoms of conscience, religion, thought, belief, opinion, expression, press, assembly, and association are “subject only to such reasonable limits prescribed by law as can be demonstrably justified in a free and democratic society.”

As long as one is not advocating genocide or violence, the defenses spelled out in the law should protect someone like Whatcott who simply has an unpopular view on PC subjects. But “reasonable limits” on the enumerated freedoms have been enacted to protect “identifiable groups” – including persons described by their “sexual orientation” and “gender identity or expression” – from discrimination. This is where “hate” crimes come in.

The "illegal" message on the back of Bill's shirt angered the Tribunal members.

Canada has enforced prohibitions on speech for some time. Since 2003, one dared not speak critically of “sexual orientation.”  In 2013, the Canadian Supreme Court ruled that earlier flyers by Whatcott (warning of homosexual health risks) amounted to prohibited “hate speech” – especially his use of the word sodomite

George Orwell had something to say about such prohibited speech:

Quite apart from the suppression of definitely heretical words, reduction of vocabulary was regarded as an end in itself, and no word that could be dispensed with was allowed to survive. Newspeak was designed not to extend but to diminish the range of thought, and this purpose was indirectly assisted by cutting the choice of words down to a minimum.
– 1984, Appendix, “The Principles of Newspeak”

Even scarier, in the last two years Canada has moved beyond prohibitions on speech. Compelled speech has now become law regarding “gender identity or expression,” adding “transgender” protections to federal law in 2017 and British Columbia law in 2016. Pronouns and new names chosen by a trans person must be used or one might face discrimination charges for “misgendering” and “deadnaming.”  (Professor Jordan Peterson famously warned against this outcome.)

In the British Columbia case, Whatcott was instructed by the state to call a man a woman. Since he wouldn’t comply, he will be fined or possibly even jailed. He is living out the 1984 thoughtcrime nightmare now:

In the end the Party would announce that two and two made five, and you would have to believe it…. Not merely the validity of experience, but the very existence of external reality was tacitly denied by their philosophy. The heresy of heresies was common sense.

The Canadian federal government leaves it to Provincial Human Rights Commissions to flesh out the new 2017 law protecting groups defined by their “gender identity or expression.”  Thus, the British Columbia case Oger v. Whatcott will be precedent setting for the whole country.

I attended this hearing in Vancouver from December 11-14, 2018. (See my report here.)  I was surrounded by transgender activists and their allies, including reps from the B.C. Attorney General’s office, a radical pro-trans feminist group, and (ominously) the B.C. Federation of Teachers. The three-judge panel included a known leftist radical, a judge formerly on the discredited Hague war crimes Tribunal, and an older fellow who had trouble obeying the Tribunal’s own rules on properly “gendering” the trans plaintiff. The judges clearly had no respect for the defendant or his supporters in the room. It was like a show trial out of Darkness at Noon.

The B.C. Human Rights Commission has authority to police publications for discriminatory statements. In 2016 the Province added “gender identity or expression” to the “identifiable groups” protected from discrimination. So the transgender activist running for Parliament was able to go after Whatcott for a flyer he distributed during the 2017 election.

The flyer neither advocated violence, nor was it hateful. Whatcott just pointed out that the candidate was a biological man and not the woman he claimed to be. All Whatcott advocated was, Don’t vote for this guy who would continue to push his sexual-radical agenda. (And the PC enforcers surely did not like the Bible quotes encouraging readers to repent and come to Jesus.)

The flyer gave the B.C. Attorney General (whose website celebrates the trans activist plaintiff) and the B.C. Human Rights Tribunal their chance to silence Whatcott. The Tribunal was clearly in accord with the plaintiff beforethe hearing started, having instructed all participants to use “she/her/Ms.” and his new female first name to address him.

Whatcott refused to comply with the speech order and even wore a shirt with a photo of the very male-appearing plaintiff and caption:  Mr. Oger [the plaintiff], no matter how you use the state to silence your critics, you are still a guy. On the back of his shirt was a Bible quote:  Male and female he created them. Genesis 5:2.  One of the judges commanded him he to remove his shirt or see higher fines (indicating the judges’ minds were already made up).

The plaintiff’s team argued that nothing critical may be said even during an election about a trans person’s “identity.”  The trans candidate lives in a “safe zone” (that doesn’t apply to other candidates). His feelings and identity as a woman supersede Whatcott’s freedom of speech.

The Tribunal could recommend fines of $100K or more against Whatcott as the case moves on to a B.C. court for a final ruling. If he is unable to pay the fine, jail time may be ordered.

In June 2018, I travelled to Calgary where I interviewed Whatcott just hours before he turned himself in on a national criminal warrant. He described the state of “justice” in Canada, the charges pending against him in Toronto, his motivations and history of activism. A handful of brave supporters rallied for him in front of the Calgary Police HQ that day. The prisoner was ill-treated by Canadian authorities over the next few days.

The Ontario case is frightening in its absurdity. Whatcott faces a claim of $104 million for the “hate crime” of passing out a flyer at the 2016 Toronto Pride parade. It included Bible quotes and information on diseases disproportionately seen in homosexual men. The plaintiffs, a homosexual activist and a former Liberal MP, claim the flyers promote hatred and were defamatory. They clearly didn’t want to face the graphic photos showing the ravages of AIDS.

Bear in mind Whatcott worked for many years as a home-care nurse to many homosexuals who were dying of AIDS in the Toronto “gay” district. He saw the suffering caused by the lies these men were told. (“Just wear a condom and you’ll stay healthy.”)  His flyers told homosexuals the truth many do not want to hear about their particular health risks.

Perhaps Whatcott’s creativity also enraged the humorless homosexual activists. While the rest of the parade was made up of endless, boring rainbow colors, gyrating pelvises, and poorly proportioned naked bodies, Whatcott injected some humor. His group registered as the “Gay Zombies Cannabis Consumers’ Association” and marched in bright green body suits. Toronto authorities had no problem with the naked marchers surrounding the “gay zombies.”  (Video here.) 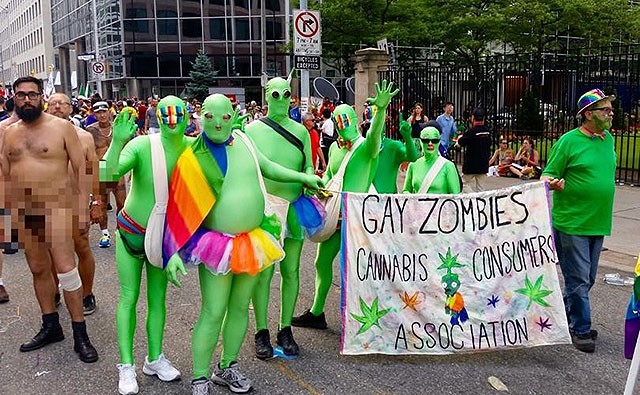 There was neither a “breach of the peace” nor “willful promotion of hatred” by Whatcott, as required for a hate crime charge under Canada’s Criminal Code. Furthermore, the Code says truth is a defense against a charge of “promotion of hatred.”  But the pro-homosexual cabal would have none of that. They even enlisted the Ontario Attorney General who had to sign off on the hate crime charge.

Whatcott’s trial will be held some time in 2019. Pray for him!

The Injustice System in Canada – Coming to the U.S.?

In Whatcott’s review of the history of LGBT activism in Canada (see transcript and video), he explains that a major opening for LGBT activists was the subversion of their Human Rights Commissions and Tribunals. At first, these agencies were limited to fair employment and housing cases for racial or religious minorities. Later they got into the “hate speech” business and are now advocating punitive fines for transgressions against LGBT plaintiffs.

The U.S. is sadly following this same route. Even with our First Amendment, we are seeing “human rights” commissions popping up all over, resulting in prosecutions. Locales, colleges, and school boards are enforcing PC speech codes. Ominously, the Equality Act – which will embed special protections for “sexual orientation, gender identity or expression” in federal law – hovers over the nation. It will surely pass the House, very possibly the Senate, and Trump may well listen to his daughter and son-in-law and sign it.

If our government is allowed to prohibit or compel speech on something as irrational and harmful as transgender ideology, it will condition citizens to accept almost any sort of censorship.

You have been warned.

______________________
Amy Contrada is the research director for MassResistance and the author of Mitt Romney's Deception (2011). She has degrees from Tufts and Brown and a Diploma in Violin Making. See AmyContrada.com for some of her writing.