Drag Queen events stopped and their perpetrators pushed back.

Tens of thousands of dollars spent by communities to deal with LGBT attacks on our protests. 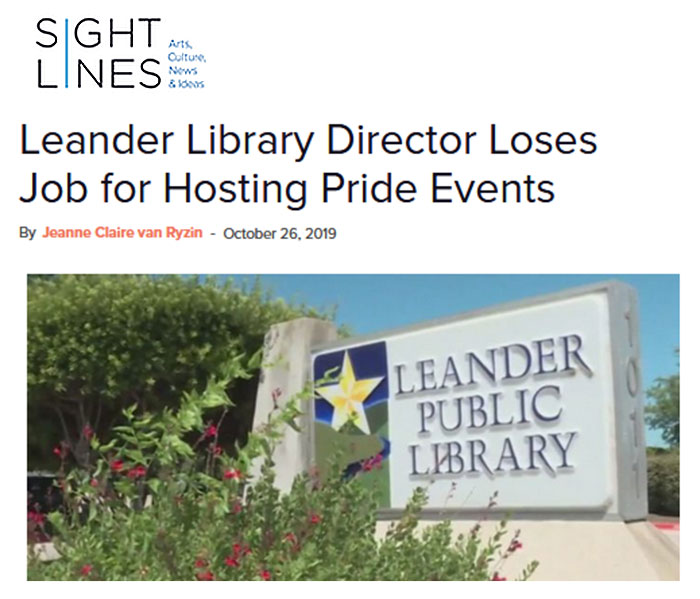 When pro-family parents and citizens are organized, equipped, and focused to confront the seemingly overwhelming (and often vicious) LGBT agenda targeting children in their communities, amazing things can happen.

When a “Drag Queen Story Hour” comes to a town, the LGBT activists assume that they’ll be able to steamroll over any pushback from parents and successfully intimidate (and demonize) anyone who speaks out. They are confident that the politicians will stay on board, and they’ll be able keep these events going indefinitely.

But MassResistance is re-writing that script! Here are some recent updates:

Leander is a suburb of Austin, TX. Back in August, after being contacted by local parents, MassResistance published a 57-page report exposing the depraved behavior of the “Drag Queen” coming to the Leander Public Library. We also organized a massive citizen outcry and a loud public protest outside the library against the event and the City Council for allowing it.

According to press reports, the police security at the protest cost the city $20,000. This was NOT because the pro-family parents were a problem, but because violent Antifa activists from that region had announced they were coming to harass the parents.

All this really got the City Council’s attention, and things changed quickly. Within days, they drastically changed the library rules regarding room rentals for events and also required background checks for all presenters to children.

There have been no DQSH events in the library since then.

However, after that the librarian insisted on sponsoring other pro-LGBT themed story programs. MassResistance continued rallying local parents to protest against the city and the library. One event slated for July was to feature a man pretending to be a transgendered woman, comic book author Lilah Sturges. The outrage from the public was huge! Two hours before the event was to begin, the city canceled the program.

Then, in October, the Leander Library sponsored a “Pride Reading Hour” to promote LGBT themes to youth. According to local reports, the event was poorly attended, and also endured a significant backlash from the community. The public opposition continued.

Finally, on Oct. 25, it was announced that the Director of the Leander Public Library was being discharged, effective Nov. 1. (She had been in that position since 2007.) According to news reports, the firing was directly connected to the library’s hosting of the Drag Queen Story Hour and the other LGBT pride events.

It was insubordination on their part … Everybody needs to ask themselves, ‘If you had a boss and you went around and didn’t tell them and you created a firestorm --- regardless of whether it’s good, bad or indifferent --- would your boss have a right to fire you?’ I think most bosses would. The library staff 100 percent brought this on our city. I feel bad for our Parks Director … There was a clear procedure, and they didn’t follow it. I hope they will [be held accountable].”

We clearly made the public officials understand that there is no place in any public library for the destructive LGBT agenda targeting children.

In Austin Texas, David Lee Richardson, aka Miss Kitty Litter, had been reading to children in the Austin city libraries as a Drag Queen for over a year. That needed to stop!

On August 12, 2019, Austin MassResistance members held a public hearing and testified before the Austin City Council about the depraved social media postings by “Miss Kitty Litter.” The LGBT activists there were incensed; one of them spat on our people and was arrested by the police! But the City Council refused to stop the Drag Queen events.

Then a few weeks later our Texas MassResistance group uncovered “Miss Kitty Litter’s” criminal record – he had been convicted of prostitution. This ignited a huge outrage by parents. The story went viral on pro-family and conservative news sites around the world.

Since then, the Austin Library System has not held another Drag Queen Story Hour!

Unbelievably, in October a local elementary school brought in “Miss Kitty Litter” to read to children in another Drag Queen program. This did not go unnoticed, and MassResistance made sure it got in the media. See:
Austin, TX Elementary School Invites Convicted Prostitute Drag Queen to Children’s Storytime

3. Dallas, Texas: No more DQSH events since the MassResistance protest

On June 13, in Dallas, TX, a bizarre pair of “Drag Queens” led a disturbing Drag Queen Story Hour event at the city’s Grauwyler Park Public Library. These events were apparently going to be held monthly. MassResistance jumped into action.

The librarian told us that “background checks” had been done on the Drag Queens. Our Texas MassResistance team researched them and posted the reports: “Cassi Nova” aka James Gary Love and “Jenna Skyy” aka Joel S. Hoselton, So much for “background checks.” It’s hard to believe anyone would invite these two to read to children. (Note the body-colored chest attachments with make-up to make it appear that they have women’s breasts.)

During the event, a few of our people were inside documenting it. The two Drag Queens read books such as “What color is your underwear” to the children. And a much larger group, organized by our new Dallas chapter of MassResistance, held a rousing protest outside.

The powers-that-be got the message, also. Since then, there have been no further DQSH events there.

Starting in November 2018, Houston MassResistance parents pounded the City Council in meeting after meeting with strong testimony about the Drag Queens. So in February, 2019, the politicians decided to move it to a different venue.

Then in March, and again in April, the bombshells exploded! Our MassResistance activists exposed two of the Drag Queens as convicted child sex offenders! From there, the whole thing fell apart. Within days, the organizers announced they were abandoning the Drag Queen effort. There hasn’t been a Drag Queen Story Hour in Houston since then!

Last December, MassResistance members in Michigan contacted us for help to take on and stop the Drag Queen Story Hour program scheduled to take place in Huntington Woods, a very liberal suburb of Detroit.

MassResistance got right to work. We stirred up a veritable firestorm in the Detroit mainstream media over the controversy. When people saw what was happening, our fight against it attracted a lot of energy.

Nevertheless, the liberal Huntington Woods City Council was almost unanimous in its support for the Drag Queen Event. But as the media reports continued, more and more non-liberal people in the community began to lose their fear of opposing the LGBT movement. So in mid-December the City Council hosted a special meeting in to defend the story hour program. It had limited success. They even hosted another program in late January. But people kept up their opposition to it.

Since then, the politicians have appeared to be tiring of this controversy. The city of Huntington Woods seems to have backed away from holding Drag Queen programs. They had advertised one in April, but we don’t know if it actually occurred.

Recently the Huntington Woods library announced was going to try again on Nov. 9 and host another Drag Queen Story Hour, along with a “Drop-in GSA” -- an LGBT event for youth. But both them have since been cancelled! 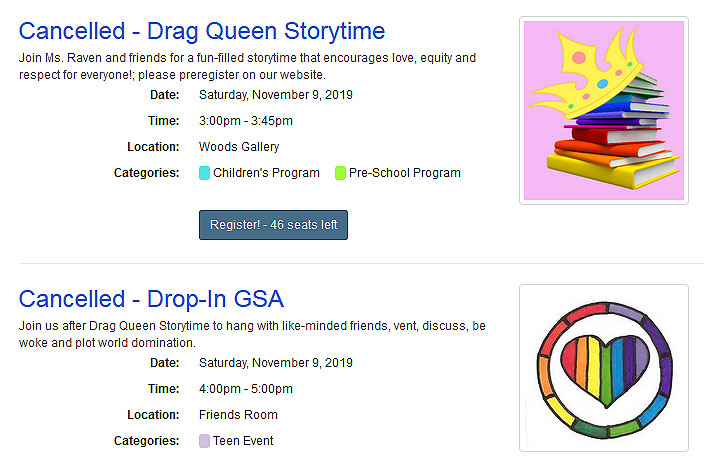 Announcements on the Huntington Woods Library's website on Nov. 6, 2019.

The Drag Queen Story Hour battle in Chula Vista, CA, a suburb of San Diego, began two months ago and is still going on. Both the Mayor and a "gay" activist City Council member are strong supporters of it. Nevertheless, local MassResistance activists have been putting a full-court press on the City Council to get them to officially put a stop to any more of these depraved events in the local library.

This week it was revealed via a Freedom of Information Act request by MassResistance that the Chula Vista Police Dept. spent approximately $42,000 for security details at the MassResistance protest outside the library on Sept. 10. The need for this was NOT because of any danger from the MassResistance parents - but because of the angry, unhinged mob of LGBT counter-protesters who came there to harass them.

The parent protest and their ongoing vocal opposition have had an effect. Drag Queen events have stopped for the time being – and there are none planned that anyone knows about. But there’s much more battling ahead to make sure it's permanent! 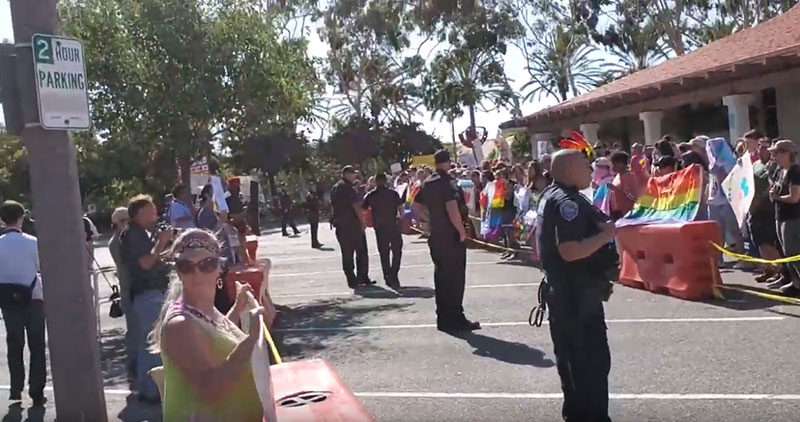 The city felt that a squad of police was necessary to protect parents (left) from the group of angry, unhinged LGBT counter-protesters (right) who came to harass them.

No other pro-family conservative groups that we know of put the in time, effort, organization, and strategy planning – not to mention the confrontational attitude – that MassResistance does to support the local parents and citizens fighting these hideous events and the public officials supporting them. It makes a big difference. And the LGBT movement REALLY despises us for it. But we’re in this to succeed!