First 3 'Teens4Truth' Conference presentations now posted!
Many more to come over the next week. Equipping youth and parents to take on the LGBT agenda. 12/28/2017

Why should you support MassResistance? Being part of the counter-revolution is empowering!
Put your resources to work! 12/19/2017

MassResistance 'Teens4Truth' Conference is a huge success! Equipping youth to counter the LGBT movement in schools.
Equipping youth to take on the culture war. A hard-hitting pro-family conference with powerful presentations. 12/10/2017

"Be yourself: Coming out as a homophobe" in the U.K. Fighting back in an oppressive anti-family nation.
VIDEO from MassResistance in the United Kingdom:
'Homophobia' is illegal in the UK and can result in arrest. Here's how our MassResistance-UK chapter deals with it! 11/21/2017

MassResistance speakers expose harsh reality of the "gay" agenda at local Texas pro-family conference.
What you're not being told about the LGBT lies. A teacher tells how "gay" training is getting into your elementary schools. 11/14/2017

Swarm of leftist media attacks our Health Hazards of Homosexuality book at conference
Flood of vituperative articles across the USA and as far away as Britain The truth really hurts, apparently. 11/1/2017

MassResistance represents the frontline battle at national Values Voter Summit in DC. Made an impression!
Speakers included President Trump. But MassResistance was virtually the only pro-family group there directly dealing with the LGBT agenda! 10/23/2017

Colorado MassResistance continues to expose and confront tax-funded pornography targeting schoolchildren.
MR activists directly confront officials in schools, libraries, and corporations. But officials refuse to stop it! So our pressure on them continues. 10/6/2017

Groundbreaking conference on for teenagers and parents "Confronting the LGBT Agenda" in your schools!
In Ft. Worth TX, Nov. 18. By Texas-MassResistance - hosted by the Southwestern Baptist Theological Seminary. Finally, a conference that doesn't back down on this critical issue! 9/29/2017

MassResistance book on LGBT health risks is gaining endorsements!
From physicians and conservative activists. Still the only book covering this crucial subject that no one wants to discuss. 9/20/2017

MA pro-life groups demand that Archbishop of Boston stop betraying pro-life principles. Urging all to sign their statement!
Their message to Archbishop: "Stop the Betrayals." Obey your own rules! 9/15/2017

Hong Kong MassResistance - our newest chapter!
Taking on the "gay marriage" fight in their country. Also part of the battle: how the government defines "transgender". 8/21/2017

In Texas Senate: MassResistance Texas parents give powerful testimony at hearing in support of bathroom privacy act.
Telling the truth in a sea of lies and compromises. SEE VIDEO. Senate votes the right way afterwards! 7/28/2017

California MassResistance confronts the LGBT agenda (and unhinged anti-Trumpers) at LA Gay Pride Parade
Not backing down on the truth -- in a sea of insanity. (See PHOTOS and VIDEO.) 6/16/2017

How parents got pro-sex-ed School Board Chairman defeated at election time
Had been top vote-getter in last two elections. MassResistance Missouri Chapter makes a difference. 5/28/2017

Elderly woman ignites liberal town by questioning "gay" flag -- and standing her ground! Reported by NBC-TV in Boston.
Town of Carlisle, MA, goes into hysteria over letter to the editor. 5/15/2017

Now posted: Powerful video presentations from the MassResistance Texas Citizen Action Conference.
What every pro-family activist needs to know. Heavyweight lineup of speakers on vital issues of the pro-family fight. Information you might not hear anywhere else. 4/27/2017

MassResistance Luncheon on Sunday April 9. Last week to register!Understanding where the "culture war" stands in 2017, and what works in fighting back. Presentations by Dr. Paul Church and Brian Camenker. 3/3/2017

Threats of violence force Boston St. Patrick's Parade to include LGBT groupLGBT protesters would be bussed in from other states to disrupt event. Boston Police would not guarantee safety. 3-17-2017

"Comprehensive sex-ed" battle in Omaha explodes in mainstream media!MassResistance affiliate in Nebraska - parents refuse to take "no" for an answer! State's largest newspaper devotes most of front page and several pages inide to controversy. 3/14/2017

MassResistance files strong pro-family bills in Mass. Legislature
To protect children and parents from radical agendas in the public schools. 3/7/2017

MassResistance Luncheon - to be held on Sunday April 9!
Understanding where the "culture war" stands in 2017, and what works in fighting back. Presentations by Dr. Paul Church and Brian Camenker. 3/3/2017

Our blockbuster book 'The Health Hazards of Homosexuality' now in paperback. The subject the conservative movement won't touch!
Over 600 pages of indispensable information to confront today's "culture war" challenges. 2/9/2017 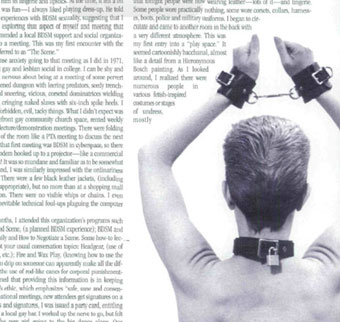 Sexual bondage for middle school children? This is just a sample of what parents found on their school's Internet portal.Is this where "comprehensive sex" is headed?

Day of reckoning for Mass. GOP this Wednesday! Election for Party Chairman. Will MassGOP continue to be pro-abortion, pro-LGBT & weak -- or pro-family and strong?
The entire direction of the Massachusetts Republican Party is at stake this week. 1/23/2017