How MassResistance stopped bad anti-family bills in the Massachusetts Legislature 2015-2016 session
In Mass., MassResistance was a major force in keeping some truly horrible bills from being passed. Here's what happened ... 12/30/2016

Helping parents fight the unbelievable LGBT sex-ed war on children in schools!
There's a war brewing in schools across America. Parents are starting to fight back in greater numbers. Here's the background of what's been going on. 11/22/2016

"The Big Evil"
How the horrific "sex-ed" is able to happen. The progressives' mass-subjugation tactic for silencing people and destroying their will. 11/22/2016

LGBT lawsuit against US pastor seeks to make Christian belief a 'crime against humanity' around the world
Christian teaching about LGBT behavior would become criminalized. 11/16/2016

Pre-Election Post: Everybody's talking about candidates they don't like. Here's a candidate we really like!
Young, conservative, intelligent, pro-family. Running a great campaign for Mass. State Senate against a horrible leftist incumbent. Snubbed by the RINO state GOP. Attacked in the media. 11/4/2016

Stand4Truth conference a big success - exposing the truth about LGBT agenda
Critical information for pro-family people, including powerful facts from ex-homosexuals. Cutting through the lies, deception, and mis-information in the popular culture. 11/2/2016

MassResistance announces major new book: "The Health Hazards of Homosexuality" now available.
The book the pro-family movement has been waiting for. Covers virtually every aspect of a subject ignored in today's popular culture. Over 500 pages and 1800 endnotes with links to sources. 10/26/2016 .

Another 'gay marriage' battle looming in Australia. MassResistance helping educate pro-family citizens there!
It's failed to pass numerous times in the National Parliament. But another fight is on the horizon. 10/23/2016

Powerful conference on the truth about the LGBT movement is back this year!
Stand4Truth conference in Houston Oct. 28, 29. Countering the lies, misinformation, and propaganda. Top pro-family speakers from across America. 10/16/2016

LGBT activists vs parents at school board meeting over graphic sex-ed
But Missouri MassResistance parents weren't intimidated and and fought right back. But is this coming to your school? 10/10/2016

Newest chapter: Nigeria MassResistance - taking on the battle in Africa!
Confronting the international LGBT movement out to undermine the region's culture. First chapter outside the US! 9/30/2016

California MassResistance continues to confront elected officials on college anti-religion bill, and more
Making sure they know that a "Yes" vote was unacceptable. Governor has two more days to sign (or veto) SB 1146. 9/28/2016

How Phyllis Schlafly profoundly changed America
Phyllis Schlafly, who passed away this week at age 92, created the modern pro-family movement and was its greatest activist. Her book changed the Republican party. But most pro-family conservatives today don't know much about her! 9/9/2016

Missouri parents show up at School Board members' homes after being repeatedly denied meetings on sex ed curriculum
Demanding answers, not silence. Parents around the country: You can learn from this group! 9/4/2016

CA MassResistance's fight to stop bill SB 1146: Here's how to lobby your state legislators!
Breaking the mold of the mushy and ineffective pro-family movement. 8/26/2016 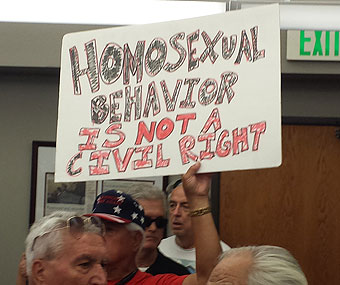 Sometimes you have to tell it like it is!

Powerful book exposing 'gay parenting' re-energizes MassResistance challenge!
What the media and cultural elite won't tell you: This autobiographical account will open your eyes about a subject that no one wants to talk about. 7/6/2016

CA bill would force Christian colleges to surrender opposition to LGBT agenda
Passed in Senate; now in Assembly. MassResistance California mobilizing to help stop it. Coming to your state? 6/27/2016

'Transgender' mom and dad: The next wave of LGBT propaganda coming to schools?
Bathroom bills and gender-free pronouns are just the beginning. The war on truth continues. Can we confront it? 6/21/2016 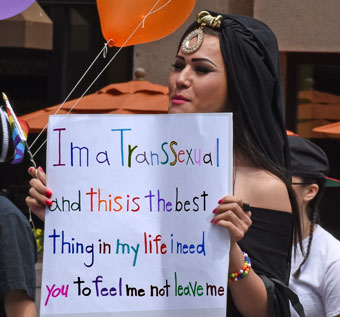 Adult activist at Youth Pride event for school "gay" clubs from across the state. 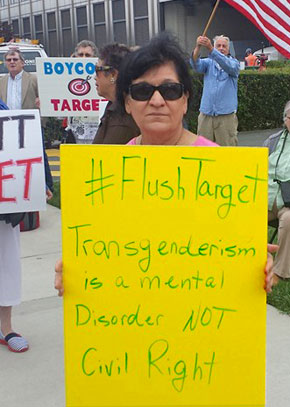 Telling it like it is outside the Target shareholders enter their annual meeting! 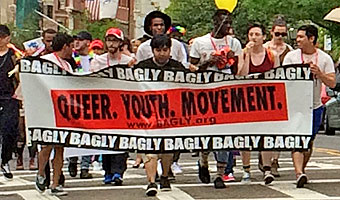 At their own events the LGBT activists are pretty open about what the "gay" school clubs are really all about.

Mass. modifies 'bathroom bill'. Attempt to counter “sexual predator” fears and push through Legislature.
Trying to gain votes to override possible veto by Governor. Senate to vote May 12. Will this scheme work? 5/2/2016 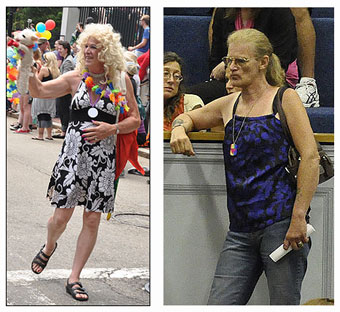 The bill would require every business to allow these men into every women's restroom, locker room, and shower.

Tenn. School Board stands up to LGBT agenda -- protects students from high school "gay" club
Sets strong rules restricting how “gay” club can operate. Will likely cause club to eventually shut down! 4/14/2016

Behind the scenes in school 'gay' clubs: Radical adult activists attacking parents.
Report from Tennessee - see shocking video. The LGBT movement constantly claims that the “gay” clubs in the schools are run by students – not adults. The truth is quite the opposite. 4/10/2016

How to confront the “Day of Silence” and other LGBT propaganda
The LGBT "Day of Silence" is coming to high schools and middle schools across the country on Friday, April 15. (Even some colleges and businesses!) Here's what you and your children can do! 4/7/2016

Supporters call on MassResistance to expand in other states – to help parents fight the LGBT agenda in schools
Activists in states across the county (and in several foreign countries) want to start MassResistance chapters. 4/3/2016

Tennessee local school board backs off from removing 'gay' club. Parents livid and fighting back.
Door is still open to shut it down, say Liberty Counsel lawyers. MassResistance was there countering LGBT intimidation and disinformation campaign. 3/20/2016

Tennessee county battling LGBT onslaught over “gay” club in high school. Showdown at school board meeting this Monday. MassResistance coming to help!
After vicious attacks by homosexual activists, local parents ask MassResistance to come and help with the fight! 3/12/2016

Pro-family activists converge on Mass. State House to counter 'bathroom bill'
Also includes calls and emails to Reps from across America! Support for outrageous bill seems to be weakening as the truth gets out. 2/25/2016

Yes, the “bathroom bill” danger to women and girls is REAL -- see chilling examples!!
But many lawmakers don't seem to care! 2/21/2016 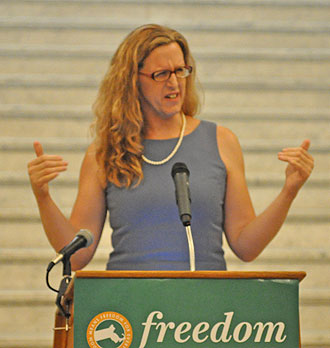 There is no Santa Claus for the front-line pro-family movement
It’s time for regular people to bring the battle to a new level! 2/12/2016

Over 300,000 rally against 'civil unions' and gay adoptions in Rome!
As parliament vote nears -- Europeans understand the problem and are willing to confront the issue without fear, while most US pro-family groups have compromised. 2/4/2016

What’s wrong with being “gay”? Here’s what they don’t tell you — and it’s very disturbing.
It's become accepted wisdom that homosexual behavior is a normal and natural variation of life. But there are some extremely uncomfortable facts. 2/4/2016

LGBT bill to ban therapy for youth on sexual orientation issues is stalled in Mass. Legislature
The result of relentless pro-family lobbying! Bill was skipped over in Wed. Jan 27 House session after “hold” was put on it. Still on hold the following week's session. But battle continues. 1/29/2016

Battle continues over LGBT bill in State House to ban therapy for youth!
Nationwide push by radicals now in Massachusetts. Vote postponed until this Wednesday, Jan. 27. 1/22/16

LGBT bill to ban therapy for youth on sexual orientation issues goes before Mass. House Jan 27
(Postponed from Jan. 21) A cruel and dangerous bill. The War on Children continues. 1/17/2016

Update: Status of "culture war" bills – good and bad – now in Mass. Legislature
The assault by the LGBT movement and Planned Parenthood continues in the State House! 1/15/2016